After the Canucks’ recent trip through Mordor (good name for the California stretch, right?), which they not only survived but managed a 2-1 record on, fans are finally starting to feel a little optimistic in Vancouver.

Really, Vancouver should have beaten the Senators by more than an overtime winner, but a few mistakes and some great play by Ottawa’s goaltender made for a hell of a finish by Daniel Sedin.

If you were watching, even though Ottawa kept fighting back to tie the game, it felt inevitable that the Canucks would pull through. They did with the eventual 4-3 victory.

Before reading the rest of this post, take a moment to bask in the glory of the current NHL standings. 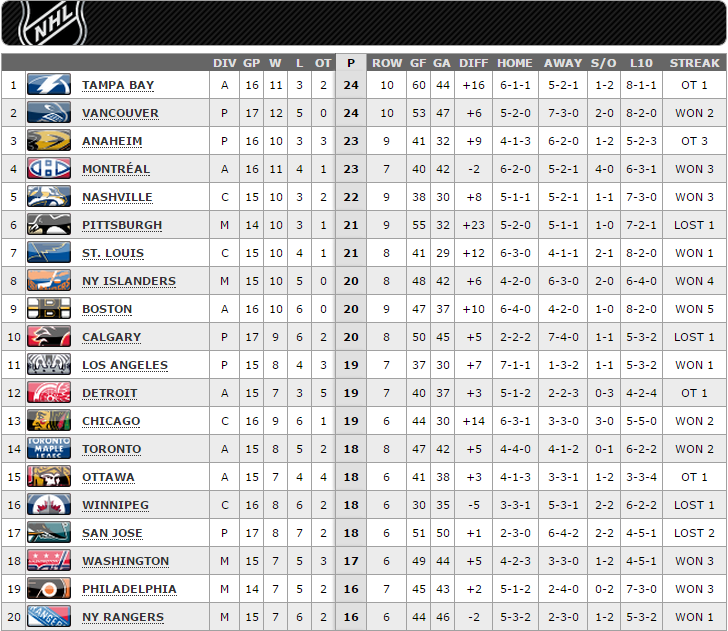 Cools. You may move on now.

Gotta start with the OT winner.

It was vintage Hank to Danny, and it was clutch. This is the second Henrik -> Daniel OT winner of the season, and although Daniel only has 4 goals on the year, as long as they’re clutch like this, he gets a pass on the low total.

Speaking of two of the best players in the NHL (who are extremely tough, btw)…

2. What does O’Neill call his cats?

Earlier Tuesday, TSN hockey analyst and former player Jeff O’Neill tweeted a picture of his two pussycats with the words “Henrik and Daniel”. Twitter peeps drew the conclusion they’d be idiots not to draw, and O’Neill quickly deleted the tweet.

Luckily @Taj1944 noticed and tweeted about it, and Cody captured it:

Lmao, @odognine2 deleted the tweet where he called the Sedins a couple pussies. Wonder why? pic.twitter.com/hkKAAR2mFd

As would’ve been predicted by anyone but the slowest of individuals (yes, this is a shot at odognine2)… O’Neill received a flood of critical replies. His response:

My cats are twins are you people insane?

Luckily, O’Neill was on TSN 1040 with Blake Price and Jeff Paterson shortly after, where he had a chance to explain himself. Here’s what he said:

“My dog’s pet name is Pavel Brendl, and I call him that because he’s kind of lazy and he lies around.”

So our conclusion that he gives his pets certain hockey names because of their disposition was right? Or no…

“Right so I take a picture of that and go for lunch with my wife and get tweets back at me saying, ‘He called the Sedins the “P” word.’

Not exactly. People thought you called your “P” words the Sedins. Same difference though.

“This is honestly insanity

“I had to delete it… I don’t even know who would dream that up, that that would be my motivation. I have too much respect for the players, Trevor Linden etcetera and I’m losing faith in humanity because it’s nonsense, it’s garbage, and I can’t take it anymore.”

Apparently he can’t take that people drew an obvious conclusion. He had more to say:

“It’s not fair. It’s not fair. Part of it – I’m trying to share my life with people and I’m thinking to myself, this is not very hockey, manly-like to show people my cats but here goes, and then I get that as a result?… Honestly, it’s garbage and it’s not fair. It’s extremely disappointing.”

Would’ve loved to hear Blake or Jeff call O’Neill out for a tweet that caused fans to draw obvious conclusions, but I guess TSN guys have each others’ backs. OK, now we know.

Whining about how it’s not fair is one possible response to people being critical of a badly-thought-out tweet. Another response would’ve been to apologize and move on.

But what do I know?

Some Canucks players get the King’s treatment even when they’re going through tough stretches.

You know who I’m talking about… the Sedins and Alex Burrows are a good example – if these guys aren’t producing it’s like fans were their best buds in high school – they have their backs through thick and thin.

Canucks fans defend them, say they’ll bounce back. They have faith.

I’m not disagreeing. It’s deserved. Most careers don’t fall off a cliff at age 33.

But then there are the players who don’t get the leash – I’m obviously talking about Jannik Hansen here. Since 2008, Hansen has put up 155 points – eighth on the list over that time.

You have to have no access to a smartphone (this is the new “living under a rock”) to be unaware of the harsh comments pouring on Hansen these days.

Want to know how fans feel about him? Phil explains:

Hansen hasn’t been this unpopular with fans since MMMBop #Canucks

In the past week of games, Hansen has been everywhere – speeding all over the ice, creating chances, forechecking hard. Yet fans are acting like he’s Tommi Santala.

After a great Sedin shift with 8m left in the game:

Hansen had two breakaways in the game. He missed both. I’m not saying he’s a gifted goalscorer, or that he’s even in the top-10 I’d like to see with the puck in that situation, but you’d think fans would give the guy some credit for creating a breakaway chance for himself in what seems like every game he plays.

This tweet puts it into words better than me:

4. Hating on Hansen part 2 – he’s better than you think

The popular argument is “Hansen changes his game when he plays in the top six.” Everyone loves repeating that he’s been quoted as admitting this.

Would you rather Hansen dump the puck every time Henrik or Daniel passes it to him?

Yesterday, #fancystats expert Thomas Drance (from The Score and CanucksArmy) tweeted out this chart that shows the Sedins’ production with different players.

When Hank has played with Hansen the #Canucks‘ first-line has been very good – both by Corsi, and goal scoring rate: http://t.co/3xMGQdRW3h

Using the chart, I’ve extracted each of Alex Burrows, Jannik Hansen, Mikael Samuelsson, Zack Kassian and Nicklas Jensen’s total playing time with the twins as well as their CorsiFor percentage with them.

You’ll see Jensen has the highest CorsiFor percentage with them. Take this with some caution, as he’s played a quarter of the time with the Sedins that Hansen or Samuelsson have seen. Also, if you look at the actual chart, you’ll see that their Corsi Against over 20 minute portions is higher with Jensen, so while he might spark more offense, he’s a greater liability on the defensive side.

Basically, Hansen’s not as much of a liability as people make him out to be. The “miscast in the top six” argument that keeps coming up? Obviously the team is better suited when they have the depth to keep him on the third line. But considering he is consistently Vancouver’s best bottom-six forward, it only makes sense when an injury occurs to promote him.

Orrr we could just keep going with this kind of logic:

@omarcanuck Miller kicks out bad rebound, Ottawa scores. #Canucks fans: Ugh, Hansen lost the puck at the other end of the ice, his fault.

During and after the California road trip, it was hard not to be critical of Linden Vey. Despite playing with the Sedins for most of the Anaheim game, he ended it with a corsi +/- of minus-6. Henrik and Daniel were minus-1 and minus-2 respectively, and it was apparent he was hurting their line with his inability to keep possession of the puck.

Against the Sens tonight, we saw (things) a different Vey.

Vey played with Brandon Defazio and Bo Horvat in the first period and the three were forechecking hard, pinning the puck deep, and creating chances. Vey was the catalyst on the line, turning and spinning away from Senators d-men, and looking like a playmaker.

He played so well on the fourth line that by the middle of the second, he was promoted to playing with Shawn Matthias and Brad Richardson on the third line. Amazingly, he didn’t miss a beat. In the third, Matthias and Vey had a couple of dominant shifts playing keepaway from Ottawa in their own end. They were so dominant, the Sens might as well have pulled up a couch and taken a seat to watch the show.

Now Vey may not be ready to take on Drew Doughty or Ryan Kesler yet, but as Snap said above, Benning may deserve some praise for this move yet (and Desjardins for being Vey’s advocate).

The second line was at it again tonight. From about halfway through the second period, it looked like it was only a matter of time until they scored.

The goal highlights why Burrows cannot leave that second line to play with the Sedins. They have found magic.

Since you requested it, Mike:

Note: thanks to @myregularface for providing the gifs used in this post.