The Canucks beat the Oilers 2-1 Saturday night, and depending which camp you’re in, this was either great news, or another horrifying kick to the draft position groin.

For those with visions of Auston Matthews dancing through their heads, they will doubtlessly be upset that the Canucks keep picking up points. To be fair, though, Edmonton is the best in the league at tanking, so even managing to force Edmonton to take a point is kind of a victory.

For those who believe in going out on their shield, they will be overjoyed by the heroics of the Canucks managing to scrape by and get points with a depleted roster.

So what were the major talking points of this game? What do the abs of Chris Higgins reveal to us?

OK, so let’s cover the main points we talk about every game. Mainly, the depleted, sorry looking roster, and the fact the Sedins are magical unicorns. Tonight was even more depleted due to the injury scratches of Burrows (not as big of a deal as it used to be, but he slayed a dragon once, never forget) and Tanev (which is infinitely worse, because we were raised to believe nobody could hurt him.)

Look at that roster. I keep checking the bottom six to see if Todd Warriner or Darby Hendrickson are playing. It’s not great. It’s like wearing an ugly Christmas sweater in January. We wonder why this is happening.

Yet once again, the Sedins keep going things to keep this team in the playoff hunt.

Even with Henrik playing injured (a fact that was so well documented by CBC and the radio play by play guys that I assume a Netflix documentary will be coming out about it soon. “Making a Henrik.”) they managed to team up with their current Anson Carter pet project and help propel the Canucks to a win.

Henrik not sitting down on the bench #Canucks pic.twitter.com/14DxtwD1Q9

Seriously, it wasn’t just Ryan, it was a running count by many people about how many times Henrik sat down on the bench.

HENRIK IS ABLE TO SIT ITS A CHRISTMAS MIRACLE

Due to the nature of the roster, mistakes are going to happen, and tonight there were some fun ones.

Up first, Matt Bartkowski trips over the ghost of Jovo past, and watches as the Oilers get a decent scoring chance. Luckily Markstrom is used to AHL competition so this does not phase him one bit.

The best part of that play? Pedan deciding “**** this, time to hurt somebody” and just dropping the Oiler player without caring about cutting off the pass.

That was a legit hit by Pedan

So oddly enough, when you play Pedan in his natural position, he looks way better (and it helps playing the Oilers of course).

Unlike his first game with the Canucks where he had to play as a forward, he was allowed to play defense tonight, and you know what? He was fun to watch.

I’m not suggest he is without holes in his game, and I’m not suggesting he’s a hidden gem, but for one game, it was fun to watch a solid mass of a man just trying to end people whenever he could.

And it wasn’t with giant, crossing over three lanes, wild attempts to land hits, like Sbisa can tend to do. It was just picking his spots and delivering solid body contact any chance he could.

Look at that hit. He made Hendricks embarrassed he even jumped over the boards to take his shift.

He’s like Colossus on ice. It looks like Korpikoski ran into a literal wall. Like, he’s playing hockey, then all of a sudden he runs into a god damn brick wall. I could watch that all day.

And I bet Pedan leaned over after and whispered “Your name should just be Korpse. Because that’s what you are now.” and then laughed and laughed until Korpikoski retired from hockey and opened up a fish bait shack.

Edler with the screen of the year! That was special.

Alex Edler just didn’t know what to do here. He froze like a deer in the headlights and couldn’t decide how to block the shot, much less take aggressive action like cutting down the gap between him and Letestu. It’s like the goalie screen slider is maxed out in NHL 16.

Poor Markstrom has no idea what’s going on, while Radim Vrbata does his best faceoff pose.

Somewhere, Chris Tanev is weeping as he wonders why people don’t understand how to block shots.

Advanced stats guys elsewhere will have a field day going over the Weber vs Biega war (Weber was the Corsi King on the night at +16 evens, while Biega was the court jester at -13 evens), but if we’re talking who won the gif battle? Biega hands down.

It’s just one play, and this is at the end of a long long shift, but watching Weber casually skate back for the puck, totally unaware that Nugent-Hopkins is smashing down the speed burst button repeatedly behind him, made me laugh.

“Ok ok, I got the puck, HEY WTF IS HAPPENING, NOOOOOOO”

Sven Baertschi continues his dividing nature by having himself a good stretch of hockey.

Noted chemist enthusiast Radim Vrbata is probably happy with the fact he gets to play with consistent line mates for several games in a row, and I have to admit they have been fun to watch.

Bo Horvat also continued his strong run of doing everything but score a goal.

Yeah, he’s not scoring, but at least his chances are way better than the start of the year, and he is using his linemates more. He doesn’t always automatically try hitting his finishing move and run straight to the net through five people, not sometimes he pulls up and dishes off to Bae or Vrbae.

4 Tank or Not to Tank

Elliotte once again bringing up if ownership will let them sell if they're in the playoff race.

Of course, this is Vancouver, and we’re not allowed to have nice things, but the interesting question is indeed what are the owners prerogatives here.

But the Aquilinis also allegedly love partying and showing off their fancy toys, so maybe they want their team to win the Cup, and are fine with a more extensive rebuild?

But the Aquilinis also allegedly like to get involved in team decisions, but also like to pursue legal action against those who say such things.

So who knows what they actually want. We will find out more when the trade deadline rolls around.

Gryba, Nikitin, and Gazdic on the ice versus the Sedins. I’m stunned at how that ended.

Willie getting a lot of credit for getting the Sedins out there in blatantly obvious situations.

Am I seriously watching Strombo and HNIC acting like Willie using icing to put Seidns against Oilers 4th line is a savvy coaching move? Smfh

One of the weird things about Coach Desjardins reign is when he gets praise for using the Sedins in a high percentage situation.

As noted in the past, the Sedins O-Zone usage isn’t what it used to be, whether it be due to age or the the fact they have a weaker roster so they need the Sedins to carry the load for some d-zone starts they normally wouldn’t do with someone like Sutter around.

Still, when you need a goal, it’s a good bet to toss the Sedins out for an offensive zone draw and see what happens. It isn’t rocket science. EA Sports has taught us this for many years.

But as we saw in the playoffs last year, when Coach Willie was resistant to over use the Sedins, sometimes when he does use the Sedins like any normal sane person would, some people get blown away by it.

“The Canucks needed a goal, and the puck was iced, so Coach puts the Sedins out there. Veteran. Savvy. Move. Game, set, match to Coach W, guys.”

Coach Willie isn’t a huge line matching kind of guy, so maybe when he does dip his hands in that pool, it looks extra special, but the praise for it tonight did feel a bit overblown.

Also, never forget his love of the fourth line:

WHY IS THE 4TH LINE ON THE ICE FOR THE LAST 30 SECONDS OF THE 3RD, WILLIE? #CANUCKS

Hansen going to the net a little too hard. #Canucks pic.twitter.com/2rxyieinRD

He's making the same face we made watching him hit his face on the post…@VanCanucks #canucks pic.twitter.com/cBzyXgqskC

This was by far the best storyline of the game. Forget the implications of the draft. Forget the playoff push. Give me a WWE moment like this every other game, and I am a happy man.

So to recap quickly, Hansen drives hard to the net, but gets slammed into the crossbar, and starts bleeding. It’s like Undertaker threw him off the top of the cage, and we can hear Jim Ross screaming about how this man has a family. 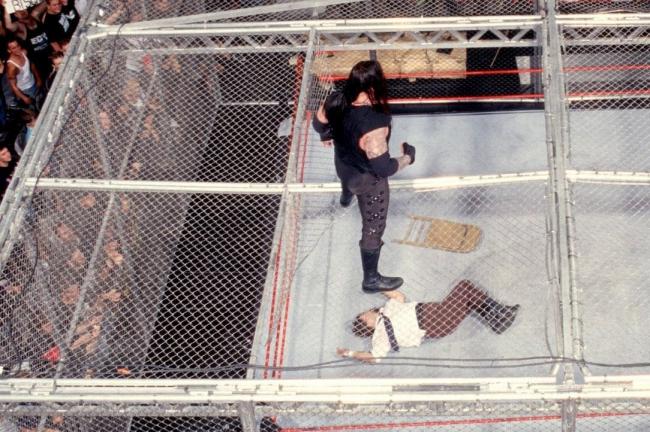 So fine, the medics come in, they pause the match, and put Hansen in the stretcher and take him to the back. They stop the match, assuming his night is done. He’s bleeding everywhere, they need to get this guy to a hospital. 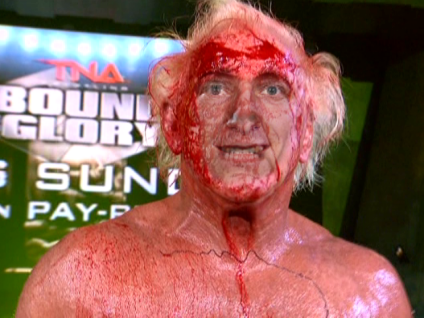 He’s pushing doctors off, and getting off of the stretcher. Nobody has any idea how this many is doing it. Jim Ross is losing his mind at this point. Hansen limps back onto the ice with fire in his eyes, and re-joins the team and heads out for OT.

Then, it happens. Hansen gets his chance in OT, and he doesn’t blink. 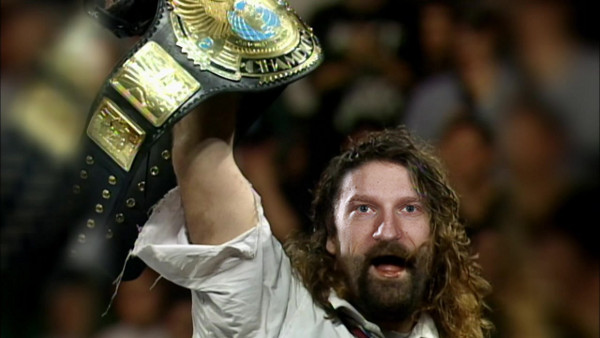