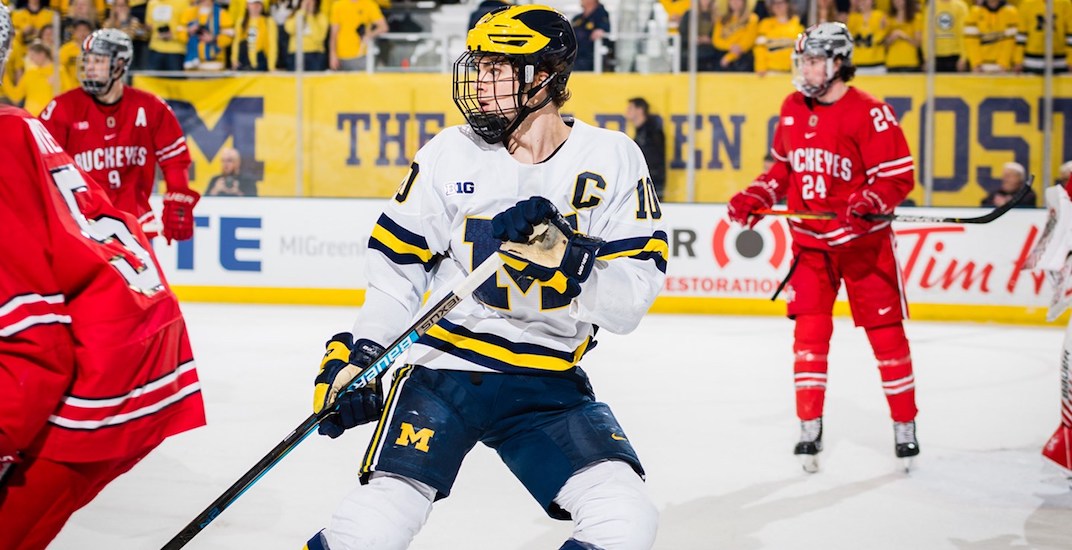 The Vancouver Canucks signed not one, but two players today, inking forwards Will Lockwood and Marc Michaelis.

Both players will make the leap to the pro ranks from college hockey.

Lockwood, 21, was the Canucks’ third-round pick in 2016. The 5-foot-11, 172-pound right winger signed a two-year entry-level contract, and should start next season with the Utica Comets.

“Will is a hard-working, two-way winger with natural scoring ability,” said Canucks GM Jim Benning. “He plays with urgency and creates chances for himself and his teammates. We look forward to adding his speed and tenacity to our roster.”

Lockwood represented USA at the 2018 World Juniors, but suffered a shoulder injury early on in the tournament.

The Canucks have been high on Lockwood in the past, seeing him as a potential two-way energy forward that can kill penalties. But Lockwood’s critics will point to his point totals, which were low given his age for an NHL prospect.

“We see him as a top-nine forward, maybe a third line guy, at worst a fourth line energy guy that gives us speed and brings us some intangibles,” Benning told reporters on a conference call today.

Michaelis is a newcomer to the organization, signing a one-year contract with the Canucks as a college free agent following four years at Minnesota State University.

“I would call him a playmaking centre iceman,” Benning explained on a conference call. “He’s a good skater, buys time with the puck, has good vision of the ice, makes other players around him better.”

“I’m excited about him because over the last four years he’s put up good numbers at the college level. He has the skill and playmaking ability, but he also plays a good 200-foot game.”