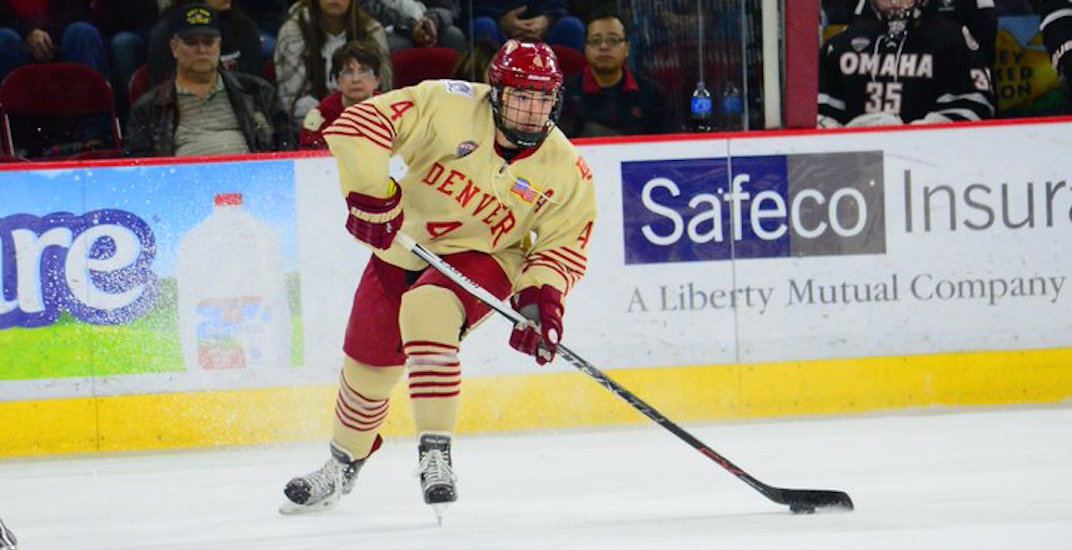 Fresh off of winning the Hobey Baker Award as college hockey’s best player in 2016-17, defenceman Will Butcher has a bright future.

The 22-year-old defenceman’s stock has risen considerably since the Colorado Avalanche drafted him in the fifth round of the 2013 NHL Draft. That’s why it comes as a crushing blow to the Avs that the University of Denver d-man is electing not to sign a contract before August 15, making him a free agent.

Given Butcher’s age, he needs to play in the NHL soon, so going to an organization that’s going to bury him in the AHL for an entire season isn’t going to be enticing.

Butcher, who is no relation to former Canucks blueliner Garth Butcher, is the type of player the organization needs (they need everything, but just go with me here).The 5-foot-10, 186-pound defenceman likely slid in the draft because of his size. That could still end up hurting him in the NHL, although there’s a long list of shorter players who have succeeded in the best league in the world.

The native of Sun Prairie, Wisconsin should have his pick of a number of teams, given he’ll come relatively cheap on an entry-level contract. Vancouver should be interested in his services, but will the Canucks catch Butcher’s eye?

Bartlett on the #Canucks (2) : “If Jim Benning calls on the 15th, we would be very interested to see what he has to say.”

The job for GM Jim Benning is to sell the youngster on Vancouver as the land of opportunity.

As a rebuilding team, the Canucks have holes in their lineup. That means opportunities for young players to play key roles, as Troy Stecher and Ben Hutton showed the past two years. And with Nikita Tryamkin opting to head back to Russia, the organization could use another young blueliner.

Vancouver appears to have their top-six set, which could be concerning for Butcher, although there aren’t many teams in the league that can guarantee a spot for an unproven player. The Canucks have Patrick Wiercioch and Alex Biega pencilled in as their No. 7 and 8 defencemen, so making the team out of training camp is entirely possible.

Before we start declaring Butcher a future Norris Trophy winner, it should be noted that he’s no guarantee. A look at the list of defencemen that have won the Hobey Baker confirms that:

There’s also not many guarantees in the Canucks’ current prospect pool. Of Vancouver’s current prospect defencemen, only Olli Juolevi projects to be a surefire NHL rearguard, and he could still be another year away from making the team.

At worst, Butcher is a free prospect, and that’s a valuable commodity in the National Hockey League.