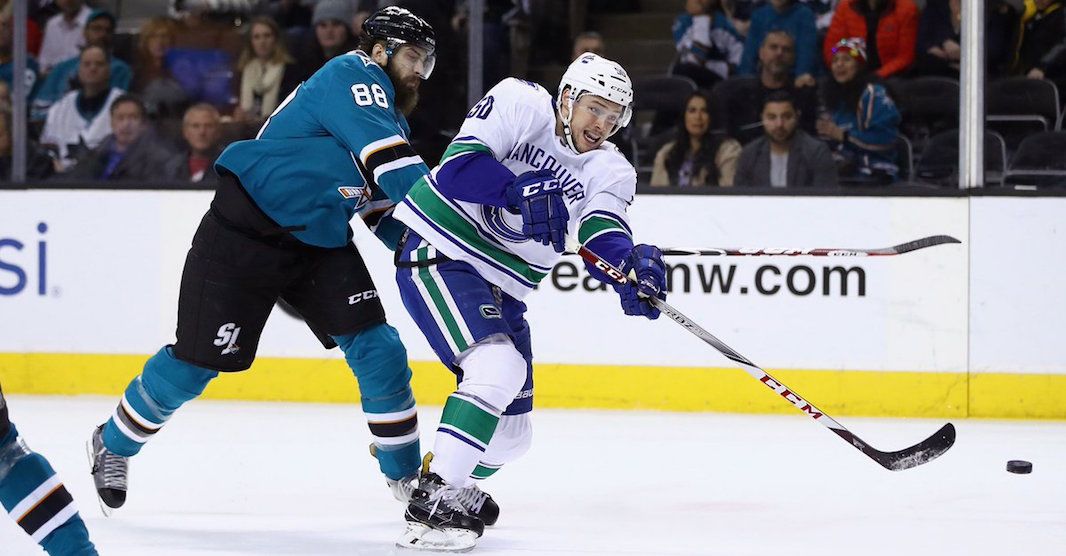 Another game, another five goals against the Vancouver Canucks.

It’s been an ugly trend the last few games, and Thursday night was no different. The Canucks got goals from Gaunce, Virtanen, Boeser, and Daniel Sedin, but it wasn’t enough as the Canucks lost 4-3 in overtime to the San Jose Sharks.

By the way, that’s no typo. Brendan Gaunce did indeed score a goal. More on that in a minute.

It was a pretty entertaining game, although watching the Sedins get so easily beaten in 3-on-3 overtime (again) was a rough way to end it.

Still, the Canucks wouldn’t have even gotten that far if it wasn’t for Daniel’s tying goal in the third period.

It took Gaunce only two games to get his first NHL goal (two seasons ago), but it seemed his second would never come.

That is, until Thursday night.

Jake Virtanen set up Erik Gudbranson, and his shot went off Gaunce’s skate for his first goal in 95 games.

He now has two goals in 97 career games, neither of which were actually scored off of his stick – leading to this incredible stat.

With the monkey off his back, maybe we’ll see Gaunce get his first goal off a shot in the near future.

Side note: Quinn called it.

Got a feeling Gaunce gets one tonight. Don't ask me why. #canucks

Jake, you earned this SixPack Superstar.

The best Canuck in San Jose was easily Virtanen. He was noticeable nearly every shift and had a ton of good scoring chances. There were two incredible end-to-end rushes that resulted in Canucks goals, the first of which set up the goal eventually credited to Gaunce.

The second, well, he finished that one himself.

Virtanen finished with a goal, an assist, five shots, three hits, and a takeaway – all in just 14 minutes of ice time.

It was the first multi-point game of the season for Virtanen, who happened to be using one of Boeser’s sticks on Thursday.

“I’m using a @BBoeser16 stick tonight,” said @Jake_Virtanen, “so if I score, you know why!” pic.twitter.com/LOE6DRNOQV

Who saw this coming?

Sam Gagner and Jannik Hansen have a combined 1,335 NHL games under their belts, but each have less than 10 fights in their career. That didn’t stop them from dropping the mitts here though.

What could have caused it? My best guess is Hansen said something out of frustration after nearly scoring his first of the season, only to have Gagner break up the play.

Did you expect anything less?

Boeser dangles Dillon, then passes to Biega who is unable to put it in…. so Boeser does it himself for his 19th of the season#canucks tie the game at 3 pic.twitter.com/JphcUORT0u

Another game, another goal. Business as usual for Brock Boeser.

This time it wasn’t the wicked wrister, but the beautiful backhand that was on display as the quick release beat the sprawling Aaron Dell.

That’s now 19 goals for Boeser. Incredibly, he could hit 20 goals as a rookie before Christmas.

Here’s a list of players with more goals than Boeser.

Yep. That’s it. Worth noting too that Boeser has played only 33 games.

Unlike peanut butter and jam, Derrick Pouliot and Erik Gudbranson should never be paired together.

It seems like a reasonable idea at first thought; pair an offensive-minded guy with a stay-at-home defenceman. But it was clearly not a good match.

Put the two together, and you get a play like this.

It was nice passing from the Sharks, but made way too easy by some bad coverage. Pouliot is at the point here, way out of position. That makes Gudbranson’s job difficult, but I’d still say he chooses the wrong player to cover, leaving Timo Meier wide open for a cross-crease pass.

Pouliot – though in over his head sometimes defensively – is nice to have around because he can do stuff like this.

He just needs a more stable partner, and same goes for Gudbranson. It seemed as though Green recognized this later on, as he split up the two shortly after that goal.

Since Jacob Markstrom recorded his first career shutout on Dec. 5, the Canucks have lost seven of their last eight games.

Perhaps even more troubling is the amount of goals against in that stretch. The Canucks have conceited 41 goals in that stretch, an average of 5.125 per-game. You won’t win many games allowing five goals.

However, keeping an eye to the future, this might not be the worst thing. The Canucks are still a rebuilding team and ultimately the best thing for the future of the team is a top draft pick.

In the case of the last two games, Canucks have collected only one point but still provided entertaining hockey. The young players are progressing, which is the most important thing in the minds of many Canucks fans.

It’s still early, but initial projections say it’s a great draft year for defencemen, particularly offensive-minded ones. That is probably the biggest hole in the Canucks prospect pool, and filling that would go a long way towards making them a competitive team in the future.

The dreadful Sedin overtime shift prompted me to tweet this, and fellow writer of SixPacks, Omar, was quick to challenge.

I'd put money on it not being the last time.

Really. I will put money on it right now…

I was mostly being facetious, I think the Canucks will probably use them there again. But I certainly don’t think they should. Especially when they have Virtanen, the best Canuck on Thursday, and easily the fastest on the team, glued to the bench.

That said, I will put some sort of bet on it for the fun of it – but money is no fun.

Anyone got any other ideas?

Just one more game for the Canucks before Christmas, a home game against St. Louis on Saturday.