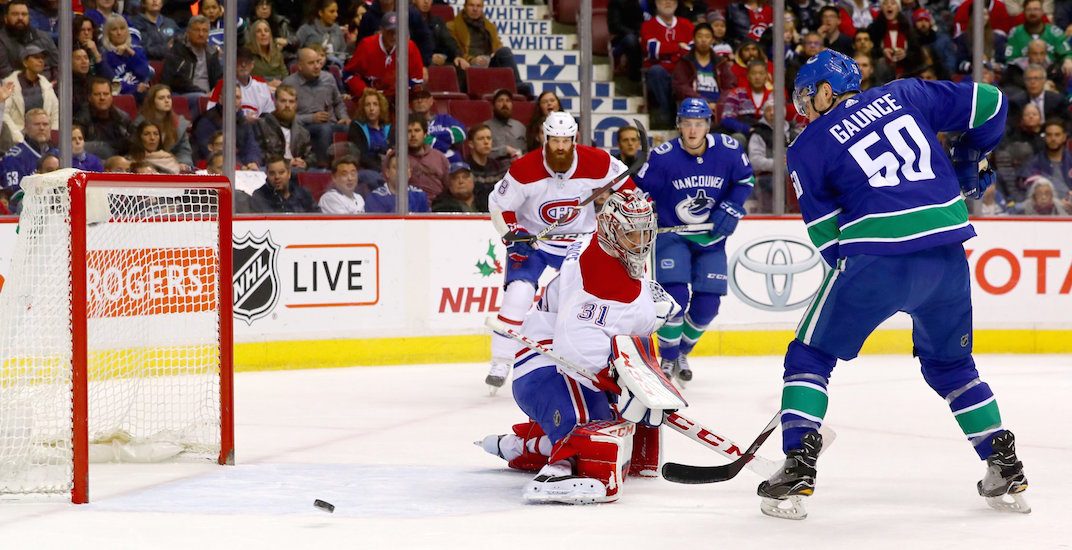 Those plucky Canucks were coming off a 3-0 win at home to the Carolina Hurricanes. Jacob Markstrom had got the monkey off his back, earning the first shutout of his career.

It was their third win in a row, which included a third-period comeback win in Nashville and an always enjoyable win at home against the Toronto Maple Leafs.

The team had a modest 14-10-4 record, but that was good enough to have them in a playoff spot. While most observers didn’t truly believe they’d ultimately hang on to that spot by April, it didn’t matter.

They had exceeded expectations with their record and perhaps even more important – they were fun to watch again.

Those were the days.

Since Bo Horvat went down with an injury on December 5, the Canucks are 1-6-0 and have been outscored 36-14. That’s not good.

Horvat’s injury created a crisis up the middle, compounded by the fact that Brandon Sutter has also missed time. Injuries to Sven Baertschi and Chris Tanev have been crushing too.

No longer are fans clamouring for one of Vancouver’s giant Swedish netminders to get more playing time. Now, they’re starting to wonder if Thatcher Demko could be a better option than Jacob Markstrom and Anders Nilsson, who have seen their save percentages drop to .907 and .906 respectively.

All of a sudden, fans are being faced with the terrifying reality that the Canucks may indeed be the team we thought they were.

It’s beginning to look a lot like last year.

Vancouver sits 25th in the overall NHL standings. They have the third-worst goal differential in the league and one of the worst home records.

To the credit of head coach Travis Green, they are more entertaining than last year’s bunch. But you can only entertain while losing for so long.

Things aren’t going to get much easier either.

Following that, the team will play seven-straight road games in January against Toronto, Montreal, Washington, Columbus, Minnesota, Edmonton, and Winnipeg.

Do you like their chances in any of those games?

They’d better hope that Horvat and Baertschi’s injuries – both listed at 4-6 weeks at the time of occurrence – heal quickly. Tanev (2-3 weeks) too.

If the Canucks are to remedy the situation with their depleted lineup, they’ll have to fix their leaky defence and goaltending first.

Vancouver ranks ninth-worst on the penalty kill, which is understandable given the lack of PK options for Green. They’ve allowed eight power play goals in their last seven games. This is where they miss their injured centres, not to mention Alex Burrows and Jannik Hansen.

Perhaps other options should be explored.

Are Henrik and Daniel Sedin an option on the PK? Perhaps they should be.

Are any secret PK specialists hiding in Utica? Maybe Darren Archibald, who would need an NHL contract first, could be that guy – if he wasn’t injured. Wacey Hamilton (also currently injured) and Carter Bancks have been the best Comets penalty killers, according to Jeremy Davis and Cory Hergott, who cover Utica games for Canucks Army. But those players aren’t on NHL contracts either.

This summer Jim Benning looked to fill spots to help the team’s power play, but he may have done it at the expense of the PK. Perhaps a trade to swap a PP guy for a PK guy is in the cards.

Does Columbus want Sam Gagner back? They currently have the league’s worst power play (11%) this season, after being successful with the man advantage last year.

Maybe Erik Gudbranson, who Elliotte Friedman thinks will get moved, brings a useful two-way forward back.

Reacquiring Jannik Hansen, who has struggled mightily, would be an obvious move if it were allowed. Because the Canucks held back salary in the deal with the Sharks, NHL rules stipulate they can’t trade for Hansen for a calendar year – pushing a potential deal until after the February 26 trade deadline.

Does the coaching staff need to change something tactically?

And therein lies the problem. For the Canucks, right now, there’s too many questions and not enough answers.