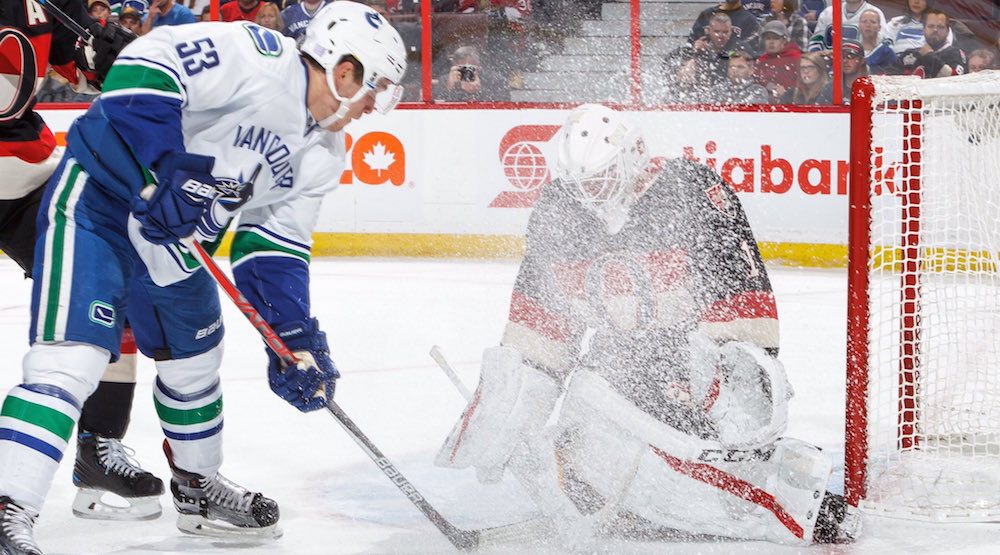 With the 1-0 loss to the Senators tonight, the Canucks have officially hit season six of Lost.

Season two was 2011. Everything was awesome. We couldn’t take our eyes off of it. We had some many questions, but they were good questions.

“Will the Canucks win the Cup this year?”

“How can we fix the fourth line??”

“What happens when Luongo stops pressing the button???”

Then they finally stopped pressing the button. Chara hoisted the Cup as a result. And then things kind of started going downhill.

The plot got murkier. We didn’t really understand what direction things were going in. They promised answers would come. We started missing characters they killed off, and didn’t like some of the new ones they introduced.

Then we started getting a bad feeling that maybe the Canucks were dead. They assured us that wasn’t the case, and we listened to them.

But last season and the start of this one has revealed, yep, sorry, they’re dead now.

The Canucks probably deserved a goal tonight. Much like the game in Montreal, they generated some chances and got a lot of shots. If they continue to play this way, they won’t be shut-out forever.

But they’ve been shut-out four games out of five right now. They have 16 goals in 11 games. This is not a dynamic offence regardless of how luck is playing out. You essentially watch for a nice Sedin shift, then pray Hansen or Horvat can will the puck into the net with mind bullets.

Even the games they won at the beginning of the year were done with an “aw shucks, how did we pull that one off” smile and wink.

Once the Canucks start scoring some goals again, there might not be many of them to do much of anything except for hurt their draft position.

Anyways, this isn’t meant to complain for the sake of complaining. It just wasn’t a very good game tonight, nor have there been many good games this season. Let’s do our best to get through a recap of tonight, shall we?

Hey @botchford @TheStanchion … the 1928-29 @NHLBlackhawks better be worried… we're after their record of most times Shutout in q season. pic.twitter.com/quCLDAr54N

It's not about winning a cup anymore guys, it's about scoring a goal

This game was trash. If you PVR’d it, I implore you, unplug your PVR, light it on fire, throw several rocks at it, urinate on it if that’s feasible, then bury it under three pounds of blessed concrete.

Then go to your Netflix “My List” and watch the movie you threw on there when you were super drunk one night.

This game was like many we saw last year. Lack of offence, suspect defence, pretty good goaltending, and Derek Dorsett being Derek Dorsett.

You could not watch this game and go to work tomorrow and fake your way through an entire conversation about it, and nobody would blink an eye.

“I can’t believe how little offence they generated…and I mean, Sbisa, what’s he thinking giving the puck away like that?? Markstrom, though, he played pretty solid.”

There. Boom. Done. You have successfully lied to your co-workers better than the time you blamed the temp who quit last week about not finishing a task assigned to you.

The game ended with Derek Dorsett and Luca Sbisa on the ice with the goalie pulled for almost a minute, then when the Sedins finally got on, there were a couple of chances, but the game ended with the puck being passed back and forth near the point. This is what we had to watch.

Burn it. Burn it now.

Look at the precocious smirk.

Much like last year, Nikita Tryamkin doesn’t necessarily do anything mind-blowing, but he is fun to watch due to his physicality and size.

If you watch him play, he finishes checks hard. He doesn’t always throw huge hits, but when he cuts a guy off on the boards, he CUTS them off. It’s the kind of player you’d love to see in an intense playoff battle. None of the physical play seems to phase him.

On the penalty kill, he’s a god damn giraffe, if giraffe’s used their head to whack pucks out of the zone. His long reach lets him get in on the puck better than the Larsen’s of the world. It’s glorious.

On top of that, when Sbisa makes a bad mistake, Tryamkin makes the other team think it’s a bad idea to capitalize on it.

He’s conditioning the other team to be afraid of Sbisa’s mistakes. He’s making them his Pavlovian dogs. That’s some next level shit right there.

He’s also fun to watch because other players can barely move him, and when they retaliate without realizing who it is, they back the hell off when they realize how tall he is.

Look at Kyle Turris dig for a rebound, feel a push, and push back before realizing he should probably run for his life.

This is what it has come down to for Canucks Nation. Getting enjoyment out of watching Tryamkin bully people.

If they dropped the Sbisa love affair & the Biega "chip," the Canucks D would look far better with Tryamkin & Stecher in the top 6

I have no idea what they’re talking about, but again, I’ll assume it’s a scene from Rounders.

Now, Luca started off the season doing relatively well. I in fact had high hopes for him having a relatively decent season.

But Sbisa playing with Philip Larsen hasn’t been great. And Sbisa is starting to do the free turnover thing again. On a season of many potential tire fires, Sbisa will be the Springfieldiest of them all, burning away for many years.

The common sentiment is fans want to watch Troy Stecher and Tryamkin because they’ve seen flashes of potential. Larsen and Sbisa don’t have quite the same shine to them, because, you know….because of the implications.

But if we’re gonna throw Sbisa under the bus, we have to do the same to Hutton and Gudbranson, who at times this year have been just as much a liability as anyone else. Last year’s hotness Hutton has regressed this year, showcasing less of those sweet subtle passes and offensive creativity.

Gudbranson continues to showcase a gritty game, but one that shows him over committing himself on plays and having to play catch up far too often.

So while they might have good games in the Corsi world, sometimes the one mistake they do make is a big one, and for a team that can’t afford to give up a single goal, that can become quite an eye sore.

I have a theory that if an NHL agitator doesn’t come up through your team’s system, unless there’s an extended Cup run (Lapierre), fans just won’t accept him.

It’s filed under the “yeah he’s an a-hole, but he’s OUR a-hole” theory.

Matt Cooke? Total a-hole of a player. But Vancouver grew up with him, so we had his back, because he was our a-hole.

Derek Dorsett is like that guy your friend brings over that gets super drunk, pukes on your couch pillow, then hits on your sister, before the friend has to take him home before somebody fights him.

Sure, he plays the game hard. Nobody is taking that away from him. But man alive, his fights happen so randomly. It’s like somebody accidentally hit the “instigate fight” button in an NHL game.

“The play was whistled dead, what the hell…ah ok, Dorsett is fighting. Time for a pee break.”

I enjoy fighting when it comes as a result of high tension. When a fight occurs just because, it’s devoid of anything. It’s hard to justify a players contract because he’s willing to get into fights over a solid body check.

But at least we saw some judo tossing?

As usual, Bo Horvat is the most exciting Canuck to watch

Jannik Hansen is also pretty good, but Horvat is one of the few reasons to watch the Canucks play hockey nowadays.

He hustles to the net, he creates chances, and he can apparently make Erik Karlsson lose his shit over a simple hit. Early in the game Horvat landed a hit on Karlsson which caused Karlsson to get a tad angry. A scrum ensued and many thought it was over at that.

But a Karlsson always pays his debts, as a shift occurred later in the game where three Senators tried to assassinate Horvat.

Horvat, being the badass he is, avoided all take downs.

Serious question. If the Canucks continue on this path, how long do you think before a major change is made? What is the major change?

Obviously the Canucks scoring woes won’t continue at this horrid pace. The Canucks should be able to scrape out more wins.

But with an owner notorious for wanting things done right away, how long of a leash does Benning have?

Is Coach Willie Benning’s meat shield? If ownership wants answers, does he throw Willie under the bus to buy himself more time?

Or is ownership so woo’d by the granola grinning Trevor Linden’s charms that they’ll let this one ride for a while yet?

At the end of the day, winning and money seem to be the Aquilini’s MO, so it’s probably not too out of left field to think changes might occur sooner rather than later.

With a team that can’t score, can’t win, and can’t attract fans to the arena, the pressure on this current management team has to be higher than ever.