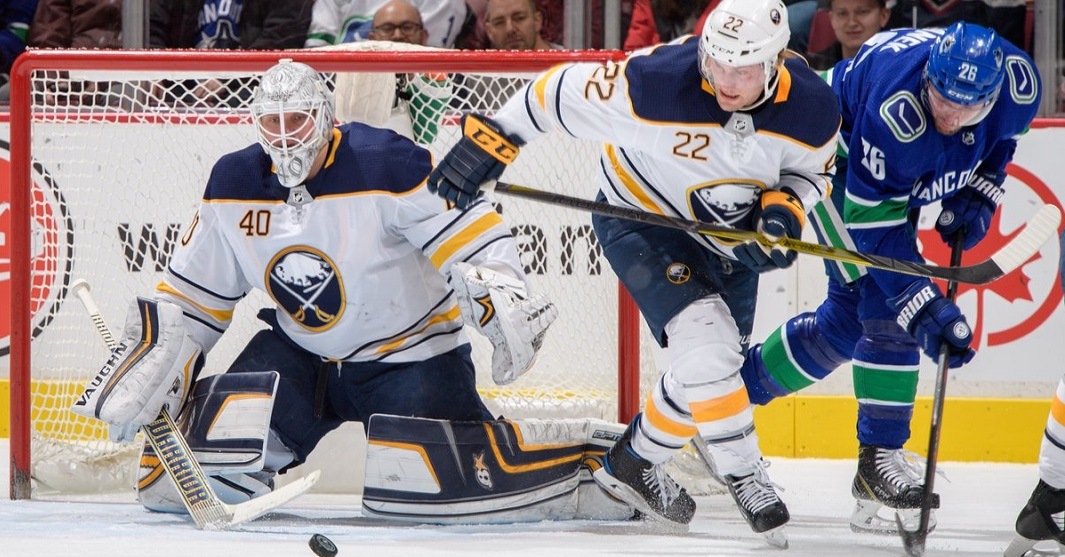 Two nights after the Canucks dismantled the LA Kings (in what was possibly the best game of the season), they played one of their worst games all season against Buffalo.

It was a harsh reminder of where this team truly stands. After six goals and a full 60-minute effort against the Kings on Tuesday, the Canucks couldn’t get anything going on home ice on Thursday against one of the league’s worst teams.

Sure the Canucks had 30 shots on Robin Lehner, but did he have to make any spectacular ones? Even any out of the ordinary? I don’t remember many.

Perhaps head coach Travis Green said it best when he summed it up post-game:

I don’t want to focus too much on the actual stinker of a game, but one thing that was noticeable was all the line juggling going on, as Travis Green likely saw what everyone else saw – a whole lot of nothing.

This is how it started, but it definitely didn’t end this way.

Green went with the same lines that worked on Tuesday (makes sense, right?), but after the slow start he was quick to switch up, and he was trying all kinds of combinations. The Sedins took shifts with at least four different wingers (Boeser, Vanek, Virtanen, Eriksson) and were even separated for a shift.

Despite all the juggling, the team never got a goal to show for it.

I will say though, the Killer B’s line (Boeser, Horvat, Baertschi) looked pretty good when reunited.

I’ve been somewhat vocal on SixPacks this season about Virtanen not getting enough ice time in games, and often sitting out third periods if he makes a small mistake.

That said, there’s no defending this.

It’s hard to call this a turning point because that would imply the Canucks had control of this game at one point, and they didn’t.

But this certainly felt like where things took a turn for the worst, as the goal put the Canucks in a 2-0 hole midway through the game.

3. Eichel all over the place

This was a rare opportunity to see Jack Eichel play in person and man, is he impressive to watch.

Eichel doesn’t get as much coverage as Connor McDavid or Auston Matthews these days because he plays on a really bad team in a smaller market, but he shouldn’t be overlooked.

Even though he didn’t get a point in the game, he was noticeable throughout and was causing all kinds of fits for the Canuck’ defence.

Size, speed, good hands, and a lethal shot, Eichel has all the tools to be elite for a long time.

You know it’s a bad loss we’re only at No. 4 and I’m already looking to Twitter.

You also know it’s a bad loss when Jeff Paterson feels confident calling it the worst of the season.

I'm calling this worst loss of #Canucks season. And there are many to choose from

Thankfully the Larscheiders were at this game, and they brought fun and energy to Rogers Arena despite the team’s lackluster performance.

They were armed with the usual signs, player chants, and drums that they usually have, and also brought in a few new signs and some ‘Brock Stars’ with blonde wigs to the section.

It wasn’t a great hockey game, but imagine what it would have been like without the Larscheiders.

On second thought, don’t imagine that.

Hear and see you loud and clear @Larscheiders!!! You guys are awesome! GO #CANUCKS GO! pic.twitter.com/qoAZGCSn3X

6. Words from the coach

You had to wonder what the coach thought after a game like that.

Well, here’s what he thought:

"We definitely had a letdown after a big emotional game last game, and I'm not happy about it at all." – Coach Green pic.twitter.com/QJ3InSV9nI

Said it before and I’m sure I’ll say it again, but I absolutely love the way Green handles his press conferences.

You’re probably wondering how there can be a bonus in the worst game of the season, but the Canucks did a Twitter challenge involving Bitmojis and I wanted to share a few of my favourites.

One of my favourite players 🐻🐻🧀🧀 pic.twitter.com/xf7MTbZF9D

Trying to calculate how the Canucks can win the 1st overall pick and Boeser winning the Calder Trophy at the same time. pic.twitter.com/TbLL3Yrto5