On January 3, Karm and I went on a weekend trip to California for the official Canucks Road Trip courtesy of the Vancouver Canucks and Flight Centre Canada. This trip being their second year running an official Canucks road trip package, it included round-trip airfare, accommodation for two hotels (LA and Anaheim) for four days and three nights, transportation to and from the airport as well as the games and, last but not least, tickets to the Los Angeles and Anaheim games. This was a trip we were very glad to be a part of and if we had walked away with all four points, the weekend would have been perfect. 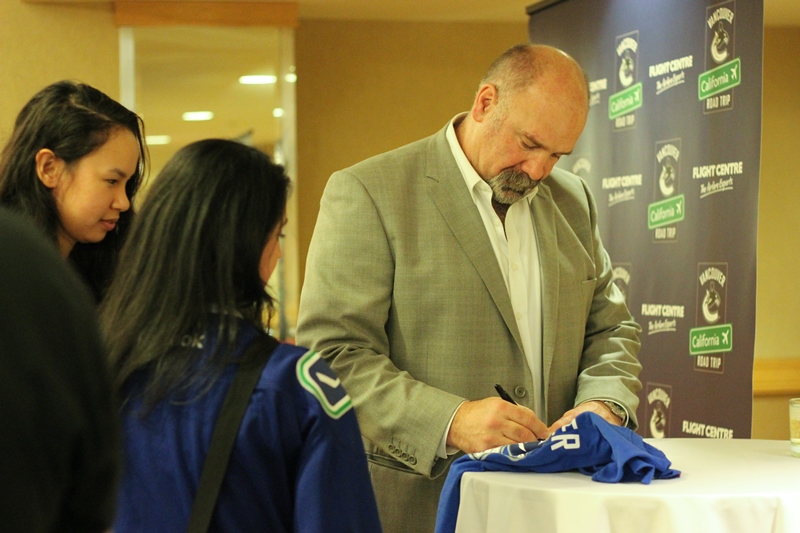 After arriving at LAX, we were shuttled to the hotel, which was walking distance from Staples Center, and were greeted with an exclusive gift that included a Canucks Road Trip t-shirt and game tickets. After we were all settled into our rooms, we headed downstairs for an exclusive Meet & Greet with well-known Canucks alumni, Kirk McLean and Dave Babych. 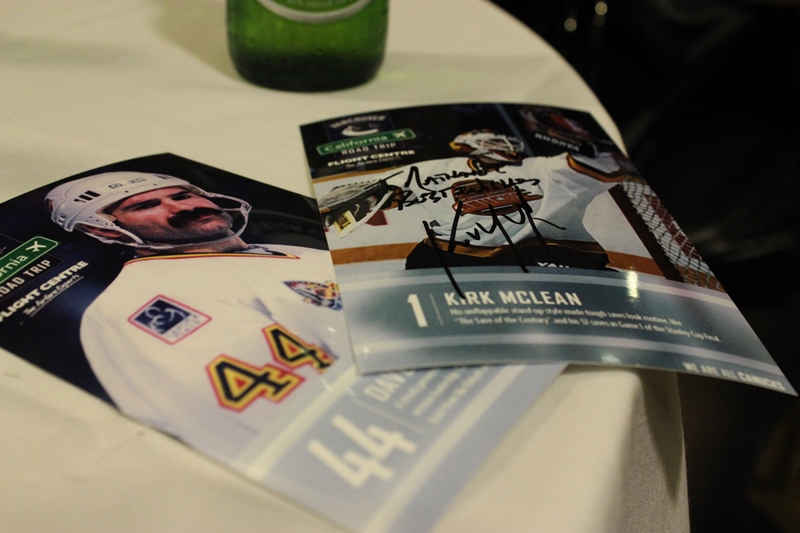 Photos of the two were passed out so we could get them autographed by the former players. The two men were very friendly and down to earth – and, might I add, Kirk McLean is one attractive man. After that, we all proceeded to the next room for a “Chalk Talk” with assistant coach Glen Gulutzan, Chief Operating Officer Victor de Bonis and General Manager Mike Gillis with Joey Kenward as the host.

At the “Chalk Talk” we were informed about the future expansion plans of Rogers Arena, injured players’ status, the popular topic about goalies, behind the scenes of coaching and John Tortorella, game improvement and even had questions answered from the fans. One of the questions asked was, “Will Eddie Lack’s birthday factor into him getting the start on Sunday against Anaheim?” Mike Gillis also encouraged everyone to really not buy into the rumours and everything they hear.

“It’s something we deal with every day and it doesn’t help the team. The sky is always falling. We’re never good enough. We’ll never be good enough. We’ve got a great team,” Gillis said.

With around 250 people on the official Canucks Road Trip, there was a great contingent of fans as we headed over to Staples Center early afternoon to watch the team practice. With two extra floors of suites, Staples Center is very impressive in size and amenities. 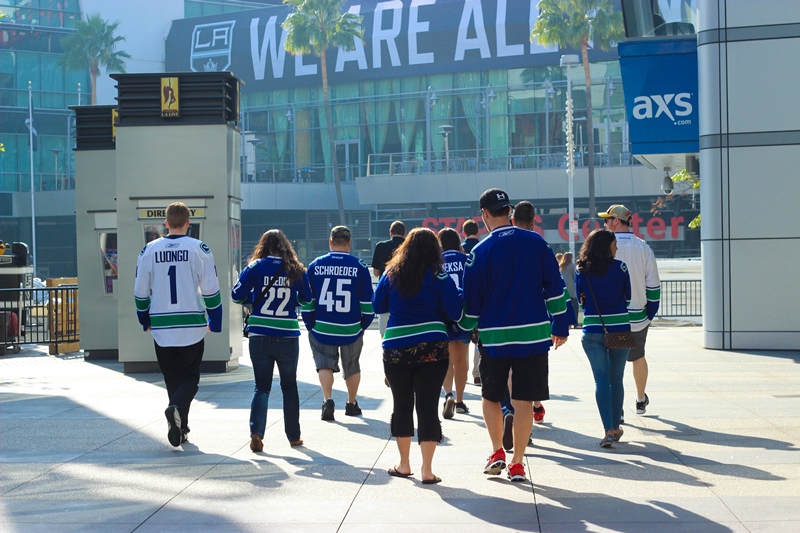 Staples Center hosts around 350 events in a year, which includes its home teams LA Lakers (NBA), Clippers (NBA), Sparks (WNBA) and Kings (NHL). It is not unusual for them to have more than one event in a single day and have to change the venue from a basketball court to an ice rink. We were lead through a private tour of Staples Center and were shown the different restaurants, suites and amenities it had to offer. We even got to check out the cigar room Jack Nicholson likes to frequent during games which happens to be one in two indoor smoking rooms in all of California.

After the tour, we had some free time and Nicole (from the Canucks), Karm and I went to a sushi restaurant called Sugarfish – and I have to put this in here because it is only the best sushi I have ever tasted in my entire life. That’s saying something because I have had a lot of sushi in my 20-something years of existence. The restaurant had over 800 reviews on Yelp and there were also somewhat strict rules for maximizing the culinary experience. For example, you had to eat the sushi right away when it arrived at your table. Also, if there is a type of sauce on your sushi, you were not to use soy sauce. You were also not allowed to ask for extra salt or sauce. In the end, it made sense because they just really want you to really understand what it’s supposed to taste like – kind of the same idea of how everyone (including myself) drowns their food in Sriracha. Anyway, if you love sushi, you must go to Sugarfish in downtown LA. 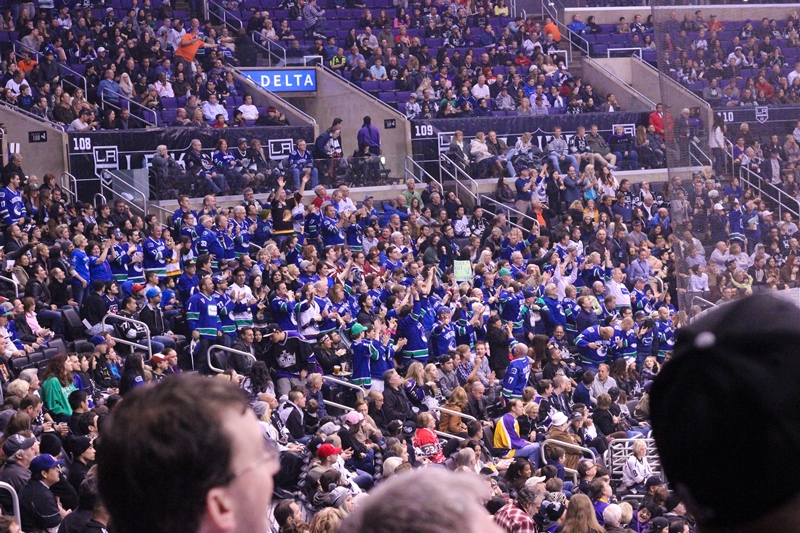 Soon enough, it was almost time for game time. LA Live was a sea of black and blue as hundreds of Canucks fans were mixed in with the home team fans. It was great to see the blotches of blue and green (and some maroon) all over the arena and the energy from both teams was great. Although it was not the greatest game for Canucks fans, hopes were still high at the end of the night for the following night’s game. Despite very few select few fans who may have been more on the unpleasant side, we found that the staff and fans were quite friendly.

In the late morning, we made our way to Anaheim. Only a 35-45 minute drive away, we were soon basking in the sun. Some of us even made our way to Disneyland, which was only a 15 minute walk away from the hotel. Although we didn’t have enough time to hang out in lines, we were able to enjoy Downtown Disney and had a great lunch in the beautiful weather. 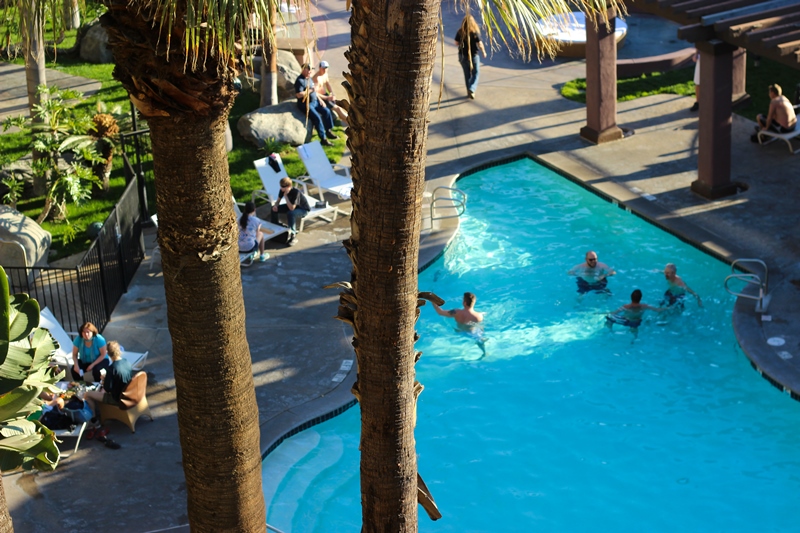 Back at the hotel, many fans in their blue and green jerseys were enjoying the pool (and pool bar) while mingling and making new friends from their hometown. The energy was fantastic and people were making most of the getaway and soaking up the sun and fun.

After being shuttled to the Honda Center, we made our way down to the glass to watch the pre-game warm up and some of us were even scared by the pucks Kevin Bieksa shot at us on purpose – much to his delight. The atmosphere was electric and positive as the Canucks put us on the scoreboard first. There were many “Eddie! Eddie!” chants and there was even a “telephone line” of singing Happy Birthday to Eddie at the end of one period. We were hesitantly hopeful as the seconds off the clock were counting down after the Ducks were able to tie the game towards the end of the game. It was pure heartbreak when even 0.6 seconds wasn’t enough to bring us to the last stage of the game. Lack put up an amazing front for his birthday showdown against Anaheim and there was still so much love for the goaltender. Eddie, if you’re reading this, we hope you had a great birthday despite the outcome. 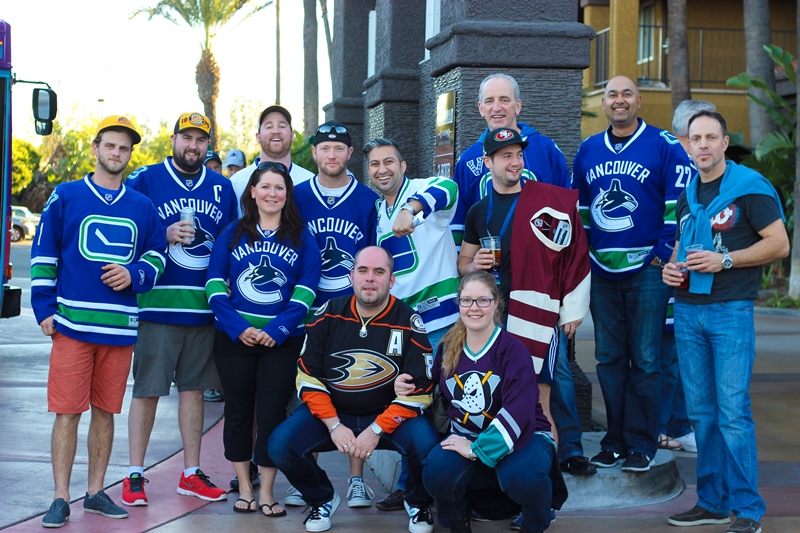 All in all, the Canucks Road Trip was an amazing time and we can’t wait for it next year! Be sure to keep up with the Vancouver Canucks and Flight Centre Canada to get all the details so you won’t miss out on this great experience next time!