Coming in to tonight’s game the Canucks had lost 3 in a row and 8 of their last 10 games. They had scored 2 goals in their last 3 games. They were also without their captain, their number one centre, their best player, Henrik Sedin.

So you could forgive fans if they were a little pessimistic heading into this one.

#Canucks are missing their No 1&2 centres along w/ No 3&5 Dmen. I don’t expect a lot of winning any time soon.

They started off strong, but still there were moments when you thought it wasn’t going to be the Canucks’ night. Like this beautiful defensive play by referee Time Peel.

It was the type of game that had you saying “oh yeah, that’s why I watch hockey”. It’s been a while for Canucks fans.

The Canucks played outstanding for two periods, blew a two goal lead, took the lead back, only to blow it late in the third. They survived 3-on-3 overtime and won the game 4-3 after Linden Vey (of all people) won it in a shootout.

Not a bad night at the rink.

The Canucks had a dream start in this one. Playing without their best player, having lost three in a row and sinking to the bottom of the standings, they came out flying.

They outshot the Wings 17-5 and got the only goal of the period. To put in perspective how much they needed that, Vancouver managed 17 shots or fewer for the entirety of three straight games against the Kings, Stars, and Bruins at the start of this month.

Their injured captain was impressed…

The consummate leader, Henrik was in the tunnel ready to greet his teammates as they came off the ice. #Canucks pic.twitter.com/MGDRpuAQRZ

The Canucks could have had a bigger lead, too. Jimmy Howard made a huge save off Alex Burrows when the game was 0-0 and Bo Horvat had a couple of chances to bump his slump, on a deflection and a wraparound.

With Henrik Sedin out of the lineup, the Canucks needed their other centres to step up. On paper, against the Red Wings, it was a mismatch.

Horvat entered tonight’s game with no points in 11 games and no goals in 21. Again, you can be forgiven if you expected bad things to happen.

I have a good feeling about @BoHorvat for tonight's game. #Canucks #Boliever

The tweet was so on point, I’m willing to forgive her for the terrible Bo pun (more on that later).

The line of Horvat, Radim Vrbata, and Sven Baertschi (he’s alive!) looked dangerous offensively all game. Here’s a beautiful passing play by the trio late in the 2nd period that made it 2-0.

That’s exactly what happened when Jared “too important to send to the World Juniors” McCann got the Canucks on the scoreboard in the first period. He had gone 14 games without a goal and hadn’t registered a point in 10.

It was a slump that caused him to lose sleep, as told by Ben Kuzma of The Province:

“There have definitely been some tough nights with sleeping and it’s never easy. The compete in you comes out and you always want to win.

I know I can play better. I’m over-thinking things and always trying to be perfect. I’ve got to get back to the way I’ve always played. Not taking anything for granted — and when I get chances, bury them.”

McCann got finally got a bounce to go his way and he buried his chance. That led to Dan Murphy giving Henrik Sedin the gears.

Told Henrik he is officially out as 1C now. He replied that anyone can score when they play with Yannik. #Canucks

Not only was Henrik out as #1 centre, he was nearly out as captain too:

#Canucks taped a C on McCann's jersey for warmup and he didn't notice until moments before they took the ice. #dammit

McCann was a player that many (including myself) thought would be better off playing with Canada’s World Junior team for a month. The Canucks are probably doomed with or without him, and the experience could be good for his development. He could also use a confidence boost.

But if the Canucks are a team that wants to win games this season (and they do), then you can understand why they decided to keep him.

The Canucks were in full control of this game for almost two full periods. They dominated the first, outshooting the Wings 17-5. After two periods, the shots were 27-10. Yet, 3:29 into the third period, the game was tied.

The Wings’ first goal was a case of the Canucks playing passive in their own zone, failing to pounce when given the chance. You couldn’t fault Miller on the goal, a tip-in in front.

On Detroit’s second goal, Miller came out far to cut down the angle, and looked silly when he left a wide open net for Pavel Datsyuk to score. 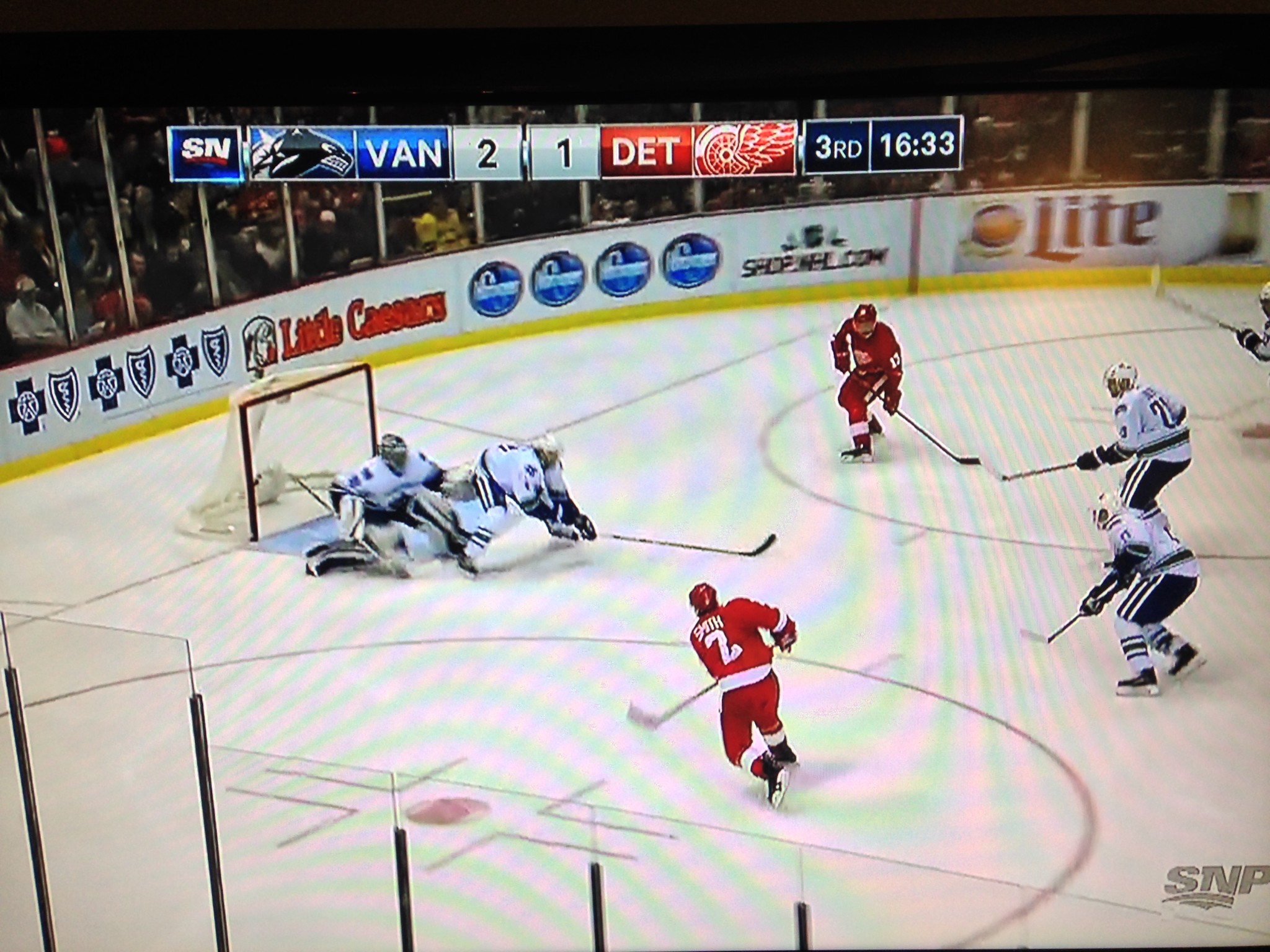 But not so fast. Check the tape and you’ll see Chris Tanev backing up all the way to the top of the blue paint. Miller has to trust that his defenceman will cut off the pass in this situation. This one’s on Tanev (feels like the first time I’ve blamed Tanev for anything).

Tanev redeemed himself on Vrbata’s goal a couple of minutes later.

Vrbata, from Tanev and Baertschi. Write that down. pic.twitter.com/mqU82vBXV4

Sven Baertschi, who had perhaps his most noticeable game as a Canuck, made a nice play to get the puck to Tanev in the first place. Vrbata showed the patience of a goal scorer, while Horvat did great work as the net-front presence.

From there, the Canucks tried to hold on and it looked like they were going to pull it off.

After Ryan Miller made a huge save late to preserve the lead, he let in this:

Plain and simple, it was a stinker.

We interrupt the SixPack to give you an update from #TankNation.

I'm at the point where I'm gonna be really disappointed if we don't get Auston Matthews.

Coming into tonight’s game, they were tied for 5th-last in the league. To make matters worse (or better, depending on your perspective), they’re the odds-on favourite to finish in last place according to the advanced stats gurus.

If you don’t believe these odds, keep in mind that it uses “Super Corsi”.

Anyways, the odds of Auston Matthews ending up in blue and green might be better than you think.

I asked Vancity Buzz prospect guru, Ryan Biech, how good each player is by comparing them to previous drafts. He told me Matthews is in between Taylor Hall and Jack Eichel, while Cychrun is somewhere in between Victor Hedman and Erik Johnson.

When Linden Vey was called up today, I knew it meant one thing: terrible puns.

@RobTheHockeyGuy how dare vey do that

I don’t know what it is with Canucks fans on Twitter, but they desperately want to make puns, particularly with young players.

So of course, nearly all of the Canucks young players were prominent in tonight’s game.

It started with a Horvat scoring chance…

Ok, that one was pretty good.

And then Linden Vey got the shootout winner…

When the pun-master scores the shootout winner in his first game back in the NHL, you know what’s coming…

Guess you could say the #Canucks found a Vey to win 🤔