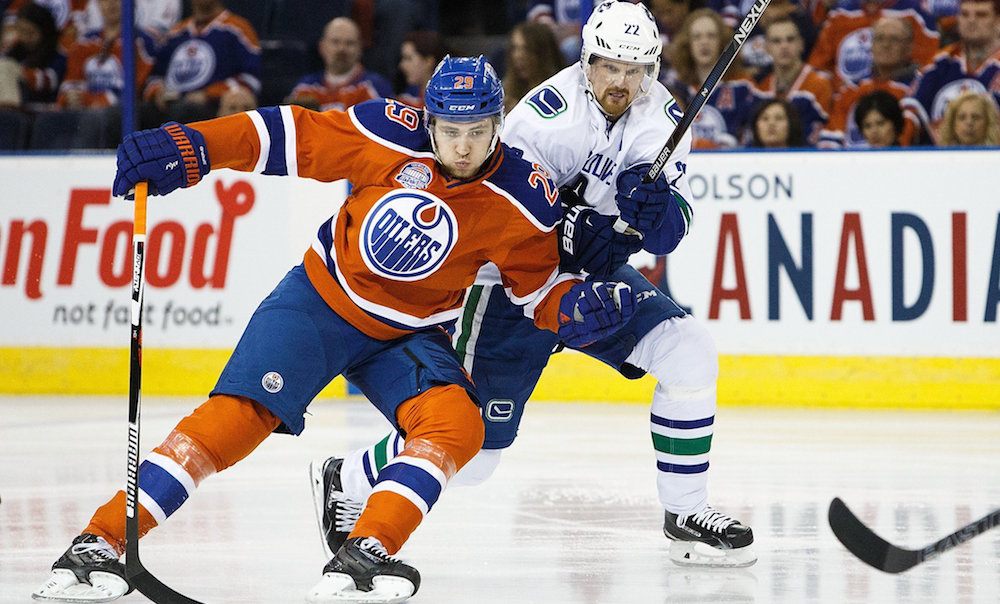 Ok, Christmas is over, but still, it felt like the Hockey Gods above must have played a part in the game.

Well, because that was probably the most exciting game of the season.

There was physical play.

There was great goaltending.

In fact, the first question the panel dove into after the Canucks won the game 3-2 in a shootout was about why Connor McDavid wasn’t in the shootout.

Don’t get me wrong, Connor is a fantastic player, and he will have a career’s worth of highlights (he got one tonight), but sometimes they lay it on a little thick.

That being said, I am in danger of talking about him too much as it is, so let’s dive into this game, shall we? Nurse that hangover, pull the blanket over your head, and read on!

It was probably their best game of the season. They were by far the most noticeable line on the night, and they set the tone early on:

Burrows almost scored, continuing the current “awww, he’s gonna retire, so let’s praise him after years of bagging on him” tour most media are on right now.

It wasn’t just Burrows, though. As usual, third-line centre Bo Horvat was the engine of the line, bull rushing to the front of the net like he was trying to get on the Skytrain at Broadway and Commercial:

This goal has many good things about it.

One, Burrows starts the play with a smart forecheck, poking the puck away from the Oiler, who chooses to slam his stick in embarrassment before floating into no man’s land.

Two, Horvat possibly Lemieux’s the puck? I mean, odds are he shot, but whatever, let’s give it to him. HE LET THE PUCK GO THROUGH HIM RIGHT TO BURROWS A LA LEMIEUX TO KARIYA.

Regardless, his hard work was once again instrumental in a goal.

Baertschi makes the nice pass, Burrows scores, and Burrows makes sure to point to each guy who was in on the goal, like a good team mate does.

Even when Burrows got rag-dolled into the glass (literally lifted off his skates by his own momentum), he stayed in the game LIKE A GOOD CANADIAN KID, LET’S GOOOOOOOOO:

The line wasn’t done there of course. Bull Horvat would once again power to the night like someone trying to merge in rush hour traffic in Richmond and boom, there’s another goal, and another assist for the future captain:

And to top off the night, Horvat got the game winner in the shootout, because that’s just how he rolls:

What a beauty shot by Horvat in the shootout – #Canucks win 3-2 pic.twitter.com/QQ3BzbKjWJ

Even more amazing? The Triple B’s, the line that was by far the most dominant line on the night, did it in third line minutes.

Will they get more minutes next game? Or will Willie stay the course, and ride the fact he has three wins under his belt? 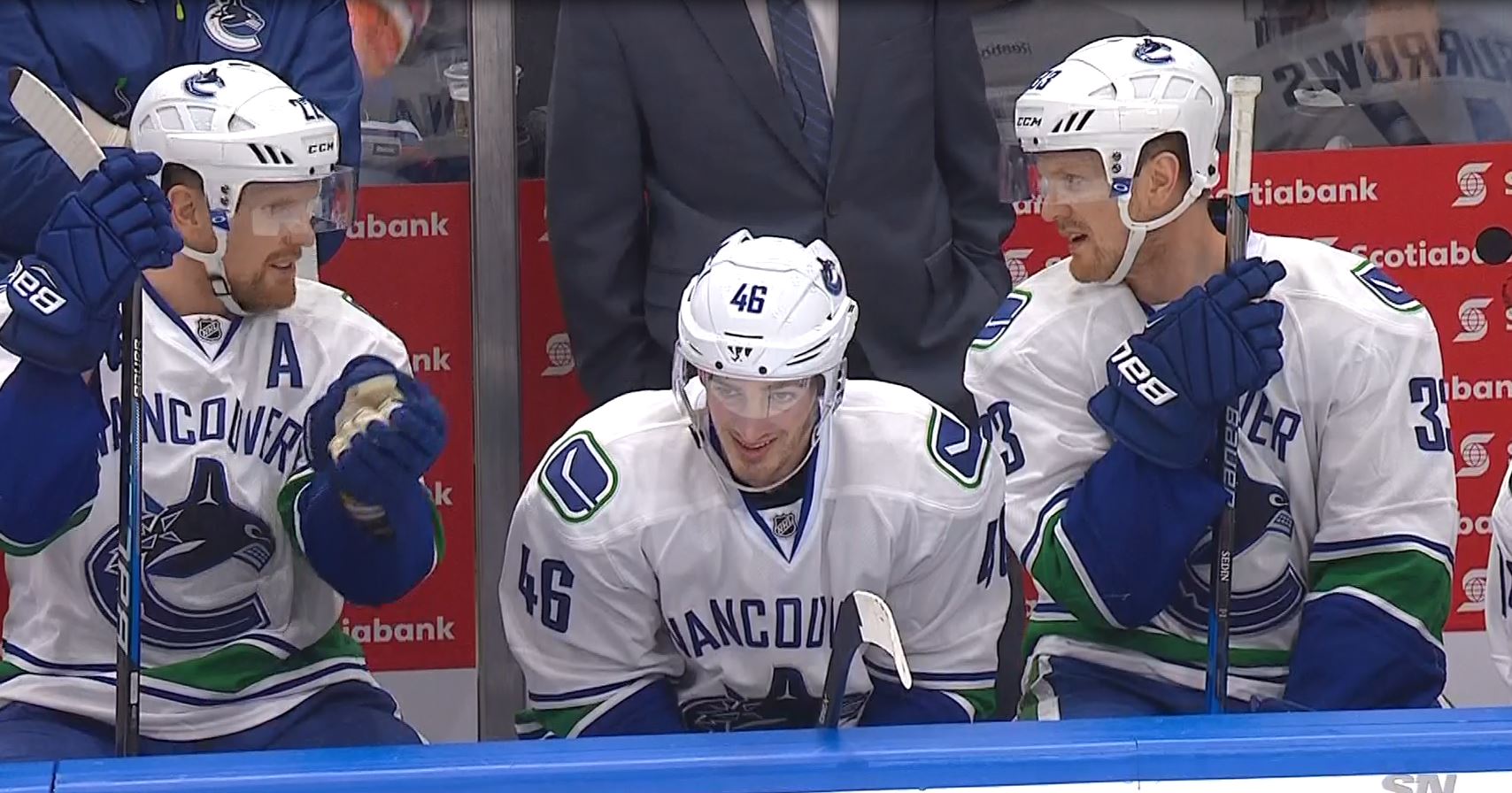 “OK, but maybe we should just not pass to him anymore.”

“Hank, he can hear you, he’s sitting right there.”

“Let’s just get to overtime, then he can’t play with us regardless.”

Yes, Megna has been playing with the Twins for several games, and the number one reason you hear given is “He’s just so darn fast, you know!”

The idea being he will fly in like Superman on steroids and retrieve the puck 80 times before the other team can blink, and get the puck back to the Twins.

The plan, for the most part, has been very average.

He misses one chance there.

Those were the highlights of his time tonight. By the end of the game, he had been replaced by Chaput, due to the defensive nature of the game.

The Sedins and Megna, by the way, had the worst Corsi on the team tonight amongst forwards. And this was with decent zone start time.

This is why anytime someone ends up being described as nothing else but “super speedy!” I get worried. It’s a label that means “He can skate I guess?” because nobody has anything else to say about their game.

Etem was one of these people.

Raymond, a guy who actually scored at an NHL level for a while, was another one.

I have no idea how long Megna will last with the team, but it feels like he will be a trivia question in a pub two years from now.

This was a goal that was called off:

Now, if they called this level of interference all the time, I would be fine with it. I tend to lean towards protecting the goalie to the point of being extreme.

That being said, you just know if that is going in the other way, that feels like it would be counted as a goal.

It’s not the strongest call ever made, but that was a continuing trend on the night.

He is incredibly fast, and very shifty (see the shifty part is what Megna is missing).

Due to this, he’s going to get hooked a lot. Sometimes they won’t be called.

So there is actually a current trend amongst Oilers fans who feel he doesn’t get enough calls.

Well don’t you worry because he was gifted one tonight:

Dave Randorf had just finished calling out Tryamkin for being too slow, but look at that. Tryamkin plays that perfectly. No hook, swings the stick around and slaps the puck, and puts his other hand on McDavid’s hip to push him the other way.

Nope, it was called a penalty.

Don’t worry, it got worse.

With the Canucks having played their hearts out (honestly, this will probably be looked back as the peak Coach Willie game), they were holding onto a one goal lead, when this was called:

One hand stick lift from Daniel.

Tryamkin poking the puck away (he is incredibly good at this).

At most, Eberle falls trying to skate around Daniel’s hand, but that’s never called in the NHL. It looks more like he kicked out his skate to block Tryamkin’s poke check.

But it was called a penalty too.

McDavid then scored to tie the game late.

I will spare you the gif of it. It will be running on Sportsnet 24/7 anyhow.

5. When keeping it real goes wrong.

One, Troy From Richmond chooses to talk to the ref about an Oiler being on top of his player, instead of getting said player off of his goalie.

This is because Troy is cerebral, he knows his biggest strength is his brain.

Gaunce, who is here to do the grunt work, gets in there to remove the intruder.

Patrick Maroon, seeing this, runs in and begins whacking away at Gaunce AND Burrows, because hey, you have to keep it real.

Maroon got the only penalty.

You know who stopped 42 shots tonight and looked amazing?

Not only did he play great the entire game, but he came up huge in the dying minutes of the game and in overtime.

How you don’t split the games between Markstrom and Miller the rest of the way is beyond me.