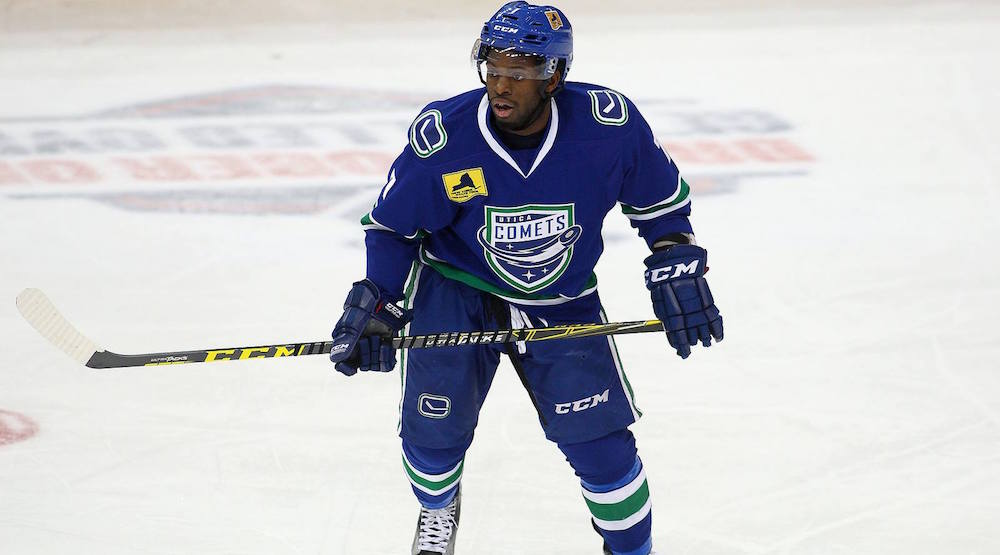 Jordan Subban has finally got the call to the show.

The Vancouver Canucks announced on Thursday that Subban has been recalled from Utica, with Andrey Pedan being sent back in his place.

Subban, an undersized defenceman the Canucks chose in the fourth round of the 2013 NHL Draft, has produced offence at every level he’s played.

Utica head coach Travis Green was very complimentary of Subban when I spoke with him in the offseason.

“Probably the first half of the year he was the most improved player on our team,” Green said. “We challenged him right from Penticton (Young Stars tournament) on. He accepted it, he plays hard.”

But of course, the question mark with Subban has always been his size. It’s the reason he slipped as far as he did in the draft. He’s listed at just 5-foot-9, 181 pounds.

“Size is a factor for him, he knows that, we’ve talked about it,” Green told Daily Hive in July. “He’s going to have to perfect certain parts of his game if he wants a chance to play in the NHL. But I did like the way he progressed last year. He does a lot of things well offensively.”

But until now, Subban hasn’t been given a chance to show what he can do at the NHL level. Truth be told, he still isn’t guaranteed a chance unless head coach Willie Desjardins dresses him.

The Canucks have appeared disinterested in Subban at the NHL level, refusing to call him up at all until now, and dressing him in just two preseason games over the last two seasons. Oh by the way, he scored there too, notching a goal in 2014 and an assist last September.

You have to wonder what his future is in Vancouver, particularly with Troy Stecher, another blueliner of small stature who has proven to be one of the Canucks’ most important defencemen this season.

If Subban can find a way to get into the lineup, it’ll be interesting to see what he can do with Vancouver’s impotent power play. It’s his bread and butter, and one area that size is inconsequential.

Certainly, it’s worth a look.