Chris Higgins is returning to the NHL.

After a string of injuries, the Canucks have announced that they have recalled Higgins from the Utica Comets of the AHL. Higgins is expected to play tonight against the Blues.

Higgins, who will turn 33 in June, had a dreadful start to the season. He was injured in the first game of preseason and had just 3 points (2-1-3) in 25 NHL games once he returned.

On a good team, he’s likely a fourth liner at this stage of his career, so teams were scared off by his contract that pays him $2.5 million next season.

After clearing waivers, Higgins was sent to the AHL on January 13.

By all accounts, Higgins went to Utica, worked hard, and was a true professional.

Hopefully for his sake, this call-up will give him a chance to resurrect his career.

And of course, selfishly for us, it will allow us to resurrect our favourite Vancity Buzz post-game SixPack image. 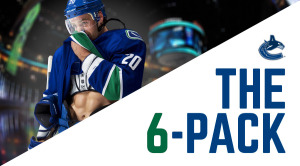