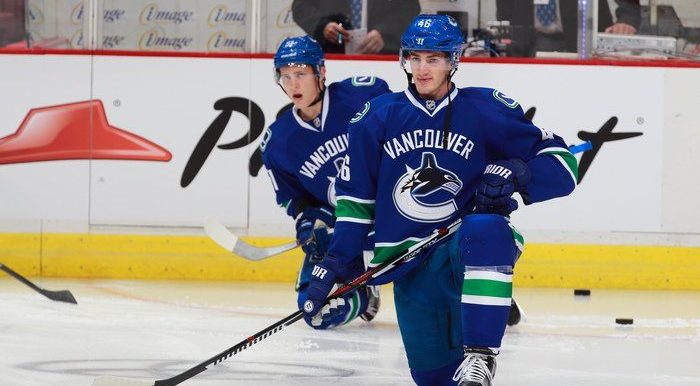 Jayson Megna is here to stay.

For one more season, anyway.

General manager Jim Benning announced prior to Sunday’s game against the San Jose Sharks that the Vancouver Canucks have re-signed winger Megna to a one-year, one-way contract worth $675,000.

“Jayson is a strong skater who adds depth to our forward group,” Benning said in a media release. “We value his character and professionalism and are pleased to re-sign him for another year.”

This is a move that won’t be popular with a large section of the fanbase.

Through no fault of his own, Megna has drew the ire of many Canucks fans, who believe he has received more ice time than he should have this season. The 27-year-old has seemingly become a favourite of head coach Willie Desjardins, who has given the first-year Canuck many prime opportunities with talented linemates.

The 6-foor-1, 195-pound forward was not expected to be a full-time NHL player this season, but that’s the way it has turned out because of a myriad of injuries suffered by the club this season.

Megna is likely to battle for a fourth-line spot in training camp in September.

While re-signing Megna shouldn’t necessarily be viewed as a surprise, the one-way nature of it should. Megna will earn NHL money, regardless of if he plays in the NHL or not next season. Given the low dollar value though, it won’t have an effect on the salary cap if he is AHL bound.