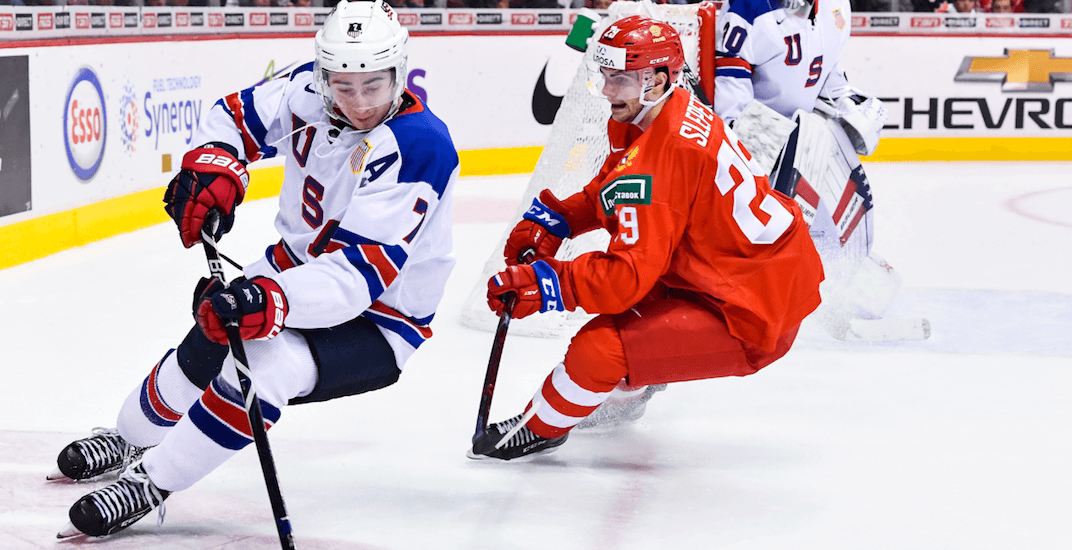 With Quinn Hughes and Tyler Madden playing for Team USA, Canucks fans have been watching their games at the World Juniors closely, hoping for a glimpse of the future.

Hughes is a particularly exciting player – he was Vancouver’s first round draft pick last summer and he holds the promise of being a number one defenceman – something Vancouver has never truly had in their history in the NHL.

While fans watching Friday’s semi-final, which USA won 2-1 over Russia, may have been underwhelmed after hearing so much about Hughes’ playmaking abilities, there’s good reason for his conservative play, he explained.

“Right now it’s not about me trying to be a hero skating up the ice,” Hughes said after the game.

“I’ve got a lot of good forwards in front of me and I just have to move the puck and do my job. At this point the tournament’s not about me doing what I usually do, it’s more about me doing my job and us winning the gold medal.”

Hughes hopes Canucks fans see some of the other things he’s been doing for his team.

“For this tournament I’ve done a really good job with not giving anything up and playing a strong mature game.”

Hughes has no goals and two assists through six World Junior games, nowhere near the 20 points he put up in 17 NCAA games this season – but you can’t argue with Team USA’s results.

“That’s what I want people to see in my game. Who knows, maybe [Saturday’s gold medal game is] a completely different game and I can show the offensive side or maybe it’s going to be shut down like it was today.”

Team USA Coach Mike Hastings agreed that Hughes has been doing the little things right during the tournament.

“If you’ve ever sat across from Quinn you know he’s a competitor,” said Hastings.

“He wants our team to be successful and I think he’s willing to do whatever it takes to accomplish that.”

Meanwhile Tyler Madden, Vancouver’s third round pick in the same draft, has opened eyes about how good he is with his play at the tournament so far.

After starting in a checking role for the Americans, Madden found himself starting the game for Friday’s semi-final. Midway through the game, he was playing on the team’s top line with Jack Hughes and Noah Cates.

Coach Hastings was bursting with praise when asked about Madden’s evolution over the course of the World Juniors.

“He’s earned that because he plays at both ends of the rink. He’s very bright with and without the puck. He’s got a lot of trust from his teammates and he definitely does from his staff.”

“Madden’s a guy we’re utilizing in all aspects. He’s been on the power play, he’s killed some penalties. He’s been a top six and top nine forward. He’s just a really good hockey player.”

Madden spoke about the way he’s moved up the lineup as well.

“At Northeastern I’m in a scoring role there so obviously that’s a role I like to play,” said Madden, who has 15 points in 14 NCAA games this season. He has three goals and one assist for the Americans in this tournament.

“I knew when I came here it wasn’t going to be given to me, I was going to have to work for it. I started off on the bottom lines and I’ve earned my playing time, so it’s good.”

On playing in front of their future fans

Madden talked about the reception he’s received playing in Victoria and Vancouver.

“I knew Quinn would get a bit of a cheer when his name was called and when I heard I was starting I thought maybe I’d get one too.”

“I definitely did. It gave me some energy and I love playing in front of this crowd.”

Hughes chimed in too.

“Not only the Vancouver fans but the support throughout the whole tournament in B.C. has been tremendous and it’s been really fun being here,” said Hughes.

“It’s very exciting. It’s a hockey city. It definitely gets me excited for the future.”

USA will play the winner of the second semi-final between Finland and Switzerland, in Saturday’s gold medal game.