The Canucks’ prospect pool is deeper than it has been in 10 to 15 years, and the man trusted with grooming many of them – for the time being anyway – is Utica Comets head coach Travis Green.

Over the next few months and years, we’ll see how some players will develop into difference-makers in the NHL, while others go from prospect to suspect. A lot can change very quickly with young players, and we need not look too far for examples.

This time a year ago, Adam Clendening and Frank Corrado were thought to be future cornerstones of the Canucks’ defence. Two years ago, Linden Vey was going to play a key role in their offence.

Over the years we’ve seen first round picks flop – like Nicklas Jensen and Jordan Schroeder – while players like Chris Tanev and Ben Hutton rocket up the depth chart.

To get a sense of what the Canucks have in the cupboard, I spoke with Utica Comets head coach Travis Green shortly before his presentation at the annual Hockey Coaches Conference in Burnaby.

Time to prove it for Andrey Pedan 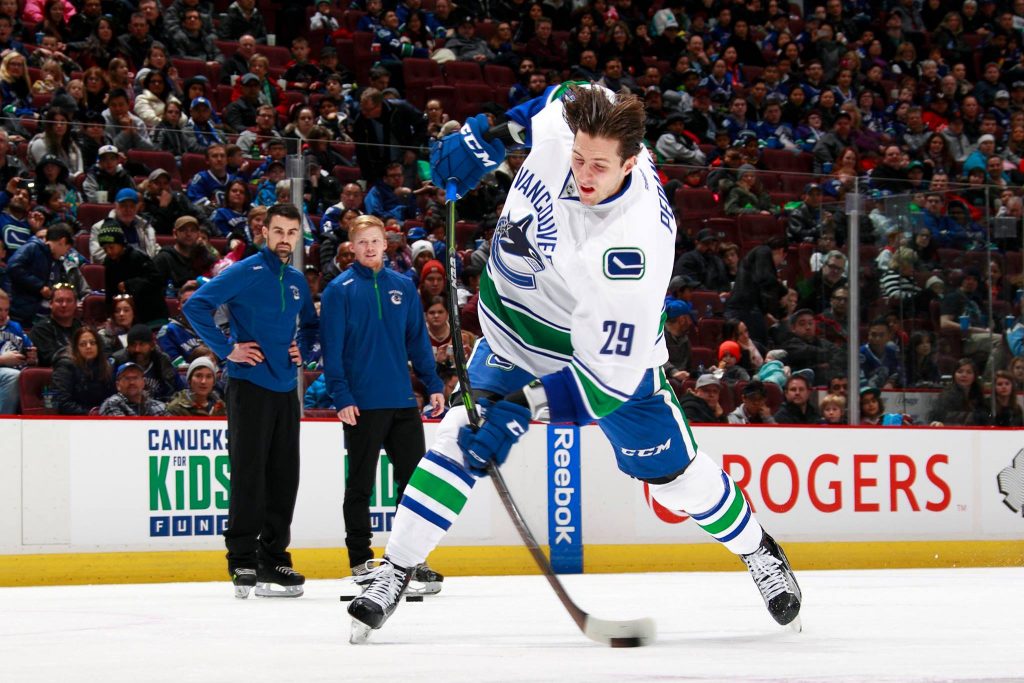 The spotlight will be on 6-foot-5 defenceman Andrey Pedan in training camp. Facing a numbers game on the Canucks defence – they have eight defencemen pencilled in ahead of him – the 23-year-old could be lost on waivers this season if the team tries to send him to Utica. He’ll need a good preseason for the Canucks to keep him.

Most players with Pedan’s size have to work on their speed and quickness, but Green doesn’t see it that way.

“He’s a young defenceman that I think in the past he’s skated so well and probably been able to skate his way out of trouble a lot. And now at the NHL level, for him to be effective, he’s got to learn to almost simplify things and make sure he makes the right play and the right pass and moves it quick and he’s not going to count on skating the puck up ice.”

For Pedan, the key will be making smart decisions with the puck.

“When you’re dealing with young players they feel at our level that they can play the power play, they can rush the puck up the ice, and trying to break them of certain habits is vital. If his brain can catch up to where he skates and the rest of his skill level, if he can get to that NHL level I think he’s got a chance to play.” 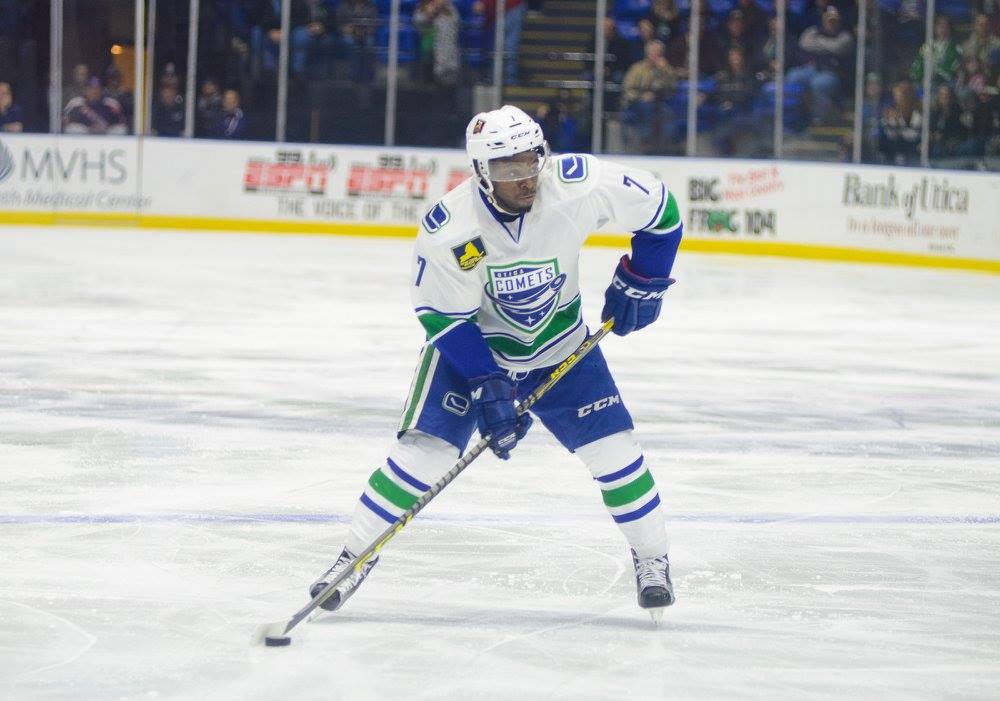 At the other end of the spectrum is 5-foot-9 defenceman Jordan Subban, brother of PK and the Canucks’ 4th round pick in 2013.

“Probably the first half of the year he was the most improved player on our team. We challenged him right from Penticton (Young Stars tournament) on. He accepted it, he plays hard.”

But with Subban, size is always the question mark.

“Size is a factor for him, he knows that, we’ve talked about it. And he’s going to have to perfect certain parts of his game if he wants a chance to play in the NHL. But I did like the way he progressed last year. He does a lot of things well offensively.”

Subban scored 36 points (11-25-36) in his rookie year with Utica, leading all defencemen in scoring.

Looking for a bounce-back year for Cole Cassels 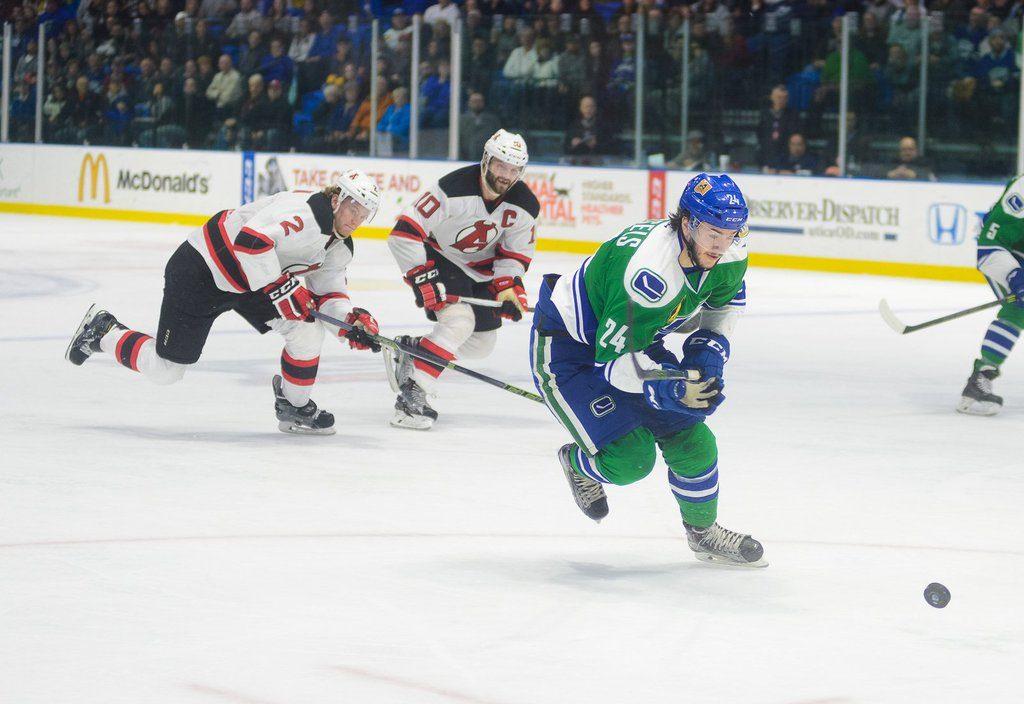 A year ago at this time, Canucks fans were buzzing about Cole Cassels, who had just “shut-down” (not really) Connor McDavid on his way to winning a Memorial Cup with the Oshawa Generals.

Cassels played through an abdominal injury for half a season and had a long recovery over the summer. It wasn’t until mid-August that he started skating again, and that meant he couldn’t prepare in the summer the way most young players need to for the jump to pro hockey.

“It was a tough year for Cole, without a doubt. We had him on a plan for the first three or four months, a workout priority over playing. His games revolved around his workouts.”

The two-way centre got a rude awakening in his first AHL season, finishing the year with just 2 goals and 5 assists in 67 games.

“It was a tough summer for him, he had a tough year, but throughout the process I don’t know if I yelled at him once, where a lot of young guys you’re barking at them a lot of times. He gave us everything he had. For me it felt like he was playing behind the eight ball a little bit and we tried to keep him afloat.”

“It’s up to him now. He’s got a full summer under his belt. The reports I’m getting back is that he’s been working exceptionally hard and making some big gains. I’m excited to see him, every year you’re excited to see how young guys come back year one, two, three.”

Is Gaunce a winger or a centre? 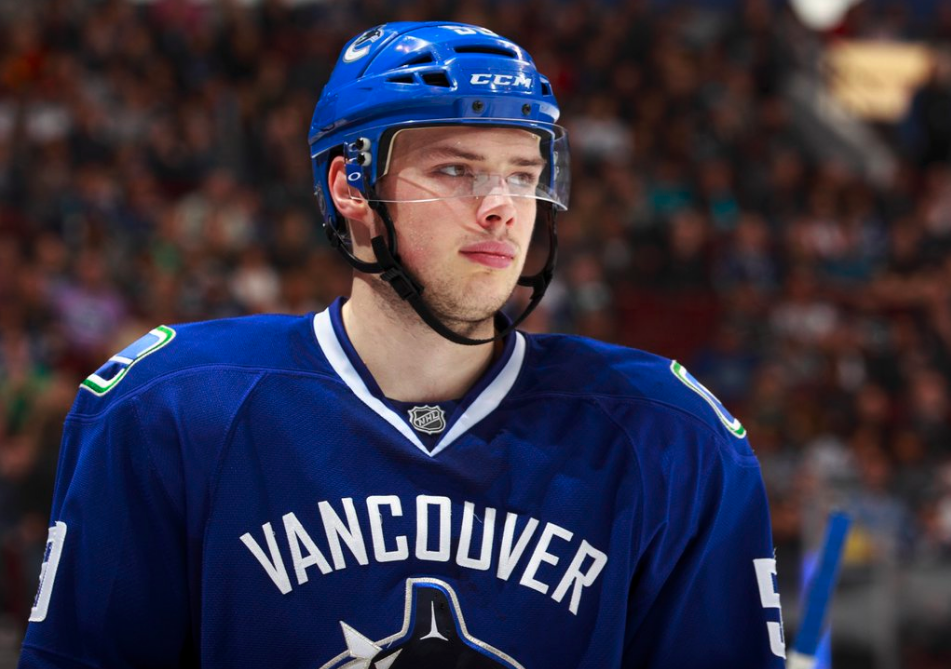 Cassels will look to take a big step forward in his second AHL season just like Brendan Gaunce did last year.

Gaunce, who played centre in junior, was moved to the wing when Green got his hands on him.

“I think it was vital for him to play the wing early in his career. He didn’t play direct enough, he wasn’t hard enough to play against, he didn’t finish enough hits. I don’t think anyone wants a big, soft centreman. They want a guy that plays with some bite, and is hard to play against.

“We felt that putting him on the wing was going to force him to play a certain way. I thought also his foot-speed in the middle wasn’t quick enough when he first came in the league.”

It appeared to work, as Gaunce excelled last year and appeared in 20 games with the Canucks. The 22-year-old was reverted back to centre at times as well, which begs the question: is he a centre or a winger?

“I go back and forth with him,” Green said, disagreeing that it could hurt his development.

“He’s going to have to be that hard player to play against, can play up and down in your lineup, can play wing, can play centre. Those players are invaluable.”

Demko needs to bring it 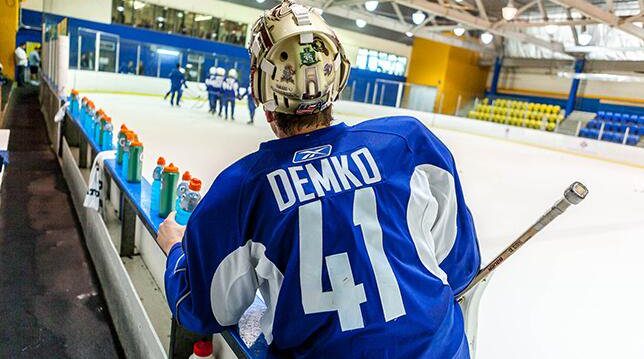 Thatcher Demko has never appeared in an NHL exhibition game, but he’s already a household name in Vancouver.

The 36th overall pick in the 2014 draft put up lights-out numbers last year for Boston College, finishing the year with a 27-8-4 record, 1.88 goals against average, and .935 save percentage.

Demko will share the net with veteran AHL goaltender Richard Bachman next season, and it remains to be seen who will get the bulk of the work.

“I haven’t put too much thought into it,” Green said. “I know last year was easy, we had two really good goalies, I split every game.

“I’m anticipating it might be different this year, but you just don’t know. I’ve never seen Demko play. I know he’s a really good young goalie, top-end prospect that we’re excited about. You hope he can come in and play 50 games, but you don’t want to put too much on a guy and you’ve just got to wait and see.”

Demko will get the net based on merit next season, and that should go a long way to deciding where he plays – Vancouver or Utica – in 2017-18.

“It’s a tough position, goaltending,” Green continued. “A goalie’s got to be able to bring it. I’m confident in Demko, I know the organization is. But there’s no way that I’m going to sit here without seeing him play, to say, he’s going to play this many games. He’s definitely going to play, and hopefully he’s ready to play 50 to 60 games, and challenge Bachman. Bachman’s a really goalie in that league, there’s a reason that he’s done well. In a perfect world I’ve got two guys that push each other every night.”