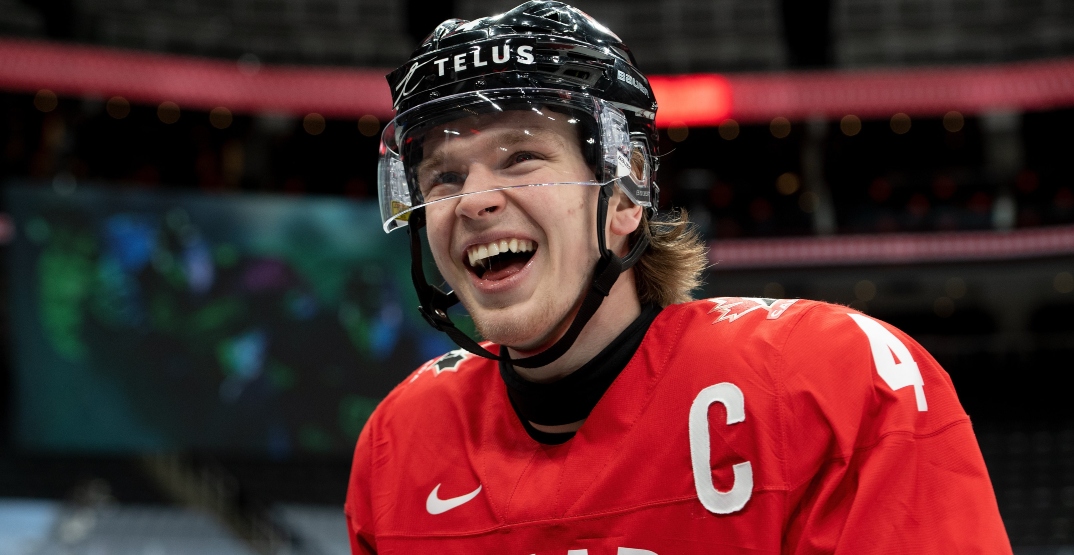 It may not quite have been 16-2, but Team Canada completely overwhelmed another opponent in round robin play at the World Juniors on Tuesday.

Quinton Byfield led the way with six points and eight different players scored for Canada as they crushed Switzerland 10-0 in a game that wasn’t close.

Byfield’s fourth point was his first ever World Juniors goal. Just over five minutes into the third period, with Canada already up 5-0, Byfield showed some nice hand-eye coordination as he deflected Jamie Drysdale’s shot out of the air and in.

Byfield scores his first with soft hands in front of the net 🥅 pic.twitter.com/wGkKibWw2r

It may have been a long wait for Byfield’s first World Juniors goal, but he only had to wait a few minutes for number two.

The Canadians wasted little time grabbing the lead in this one thanks to Philip Tomasino, who continued his hot start at this tournament. Tomasino took a pass from Byfield and snapped his fourth goal in three games by Noah Patenaude’s blocker.

Quick snipe and Canada is up 1-0 pic.twitter.com/uRRWhcnaGB

Canada outshot Switzerland 13-3 in the opening frame, but wasn’t able to extend their lead. Failing to convert on a lengthy 5-on-3 power play didn’t help.

Canada was able to capitalize on a power play early on in the second period, though, as Dylan Cozens knocked home a loose puck in front of the net.

Cozens’ fourth goal of the World Juniors pulled him back into a tie with Tomasino for the team lead.

Just over six minutes later, Canada extended their lead further. Byfield made a nice move at the blue line before passing off to Calgary Flames first-rounder Connor Zary in the slot. Zary’s shot missed the net, but the puck came back out in front off the boards and fellow Flames prospect Jakob Pelletier was there to put it home.

Nifty hands from Byfield leads to the goal for Canada 🇨🇦 #WorldJuniors pic.twitter.com/be0lecAJiv

Canada kept their foot on the gas pedal. Ryan Suzuki knocked home a loose puck on the power play and Connor McMichael found the back of the net as well. Byfield, the second-overall pick of the Los Angeles Kings in October and the youngest player on Canada’s roster for the second straight year, picked up his third assist of the game on Suzuki’s goal.

The Canadians went back to their dressing room with a 5-0 lead and a 37-7 edge in shots through 40 minutes, having completely taken over the game in the second period.

Byfield’s pair of third period tallies extended the lead to 7-0, and he’d get his sixth point later when he set up Pelletier’s second goal of the night. Cole Perfetti and Kaiden Guhle also scored to keep the blowout going.

When it was all said and done, the final shots were 52-15. We’re assuming these guys loved every minute of it.

I love this. Fans outside the #WorldJuniors bubble in Edmonton cheering on Team Canada, with players spotting them on their walk to the rink. pic.twitter.com/tJgExn1scS

Canada has taken care of business the way they were supposed to in Group A so far. Now the real tests begin. They’ll take on Finland on New Year’s Eve to determine the top seed in the group, then take on a team from the tougher Group B that will cross over for the quarter-finals.

The puck drops against Finland at 6 pm ET/3 pm PT on Thursday.