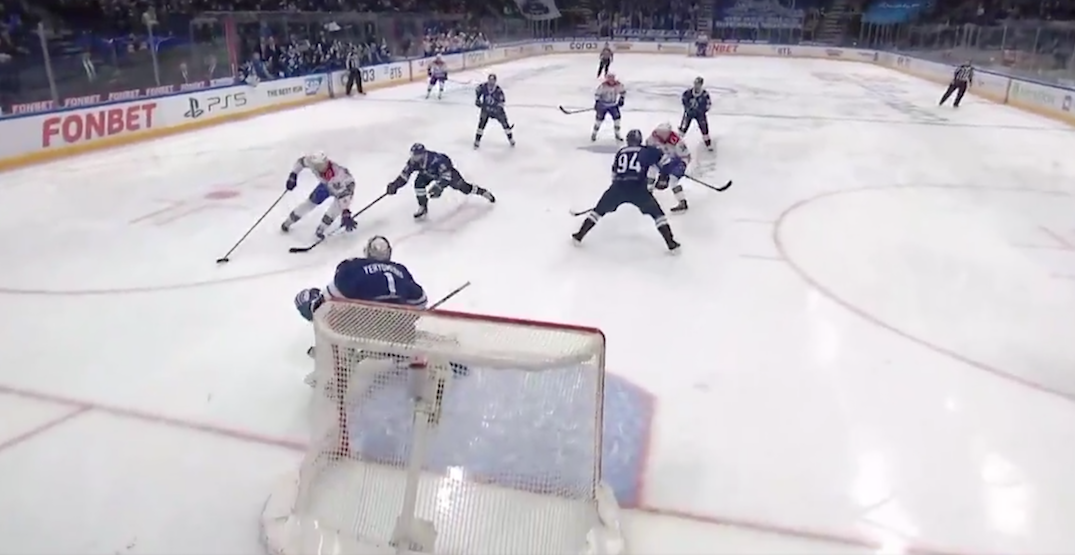 The Vancouver Canucks’ power forward of the future gave fans something to get excited about today.

Vasily Podkolzin scored a beauty for SKA St. Petersburg, blowing by a defenceman before barging to the front of the net to score the opening goal today’s playoff game against Dynamo Moscow.

SKA won the game 3-2 in overtime, giving them a 2-1 best-of-seven series lead in the Gagarin Cup conference semi-finals.

Podkolzin’s time with SKA, which is nearing an end, has been plagued by a lack of opportunity, as Russian teams typically don’t give a lot of ice time to young players. The 19-year-old has been playing more in the second half of this season though, including 16:11 of ice time today. The six-foot-one right-winger now has four points in eight playoff games.

Here are a couple of Podkolzin highlights from Saturday’s game, courtesy of Elite Prospects’ director of film scouting, Cam Robinson:

Kirill Marchenko bangs home the rebound on the PP to put SKA up 1-0 late in the 3rd.

No one outworks Vasily Podkolzin.

He was hobbled for about 30 seconds on this PK. He ends it by laying out for a block. pic.twitter.com/PqhHLRGAai

The Canucks will surely be conflicted following his progression during the KHL playoffs, as they want to see him succeed, though the sooner his team is eliminated, the quicker they can get him to North America.

Podkolzin will likely sign an NHL contract after SKA’s season comes to an end, with the former first-rounder likely joining the Canucks soon after.