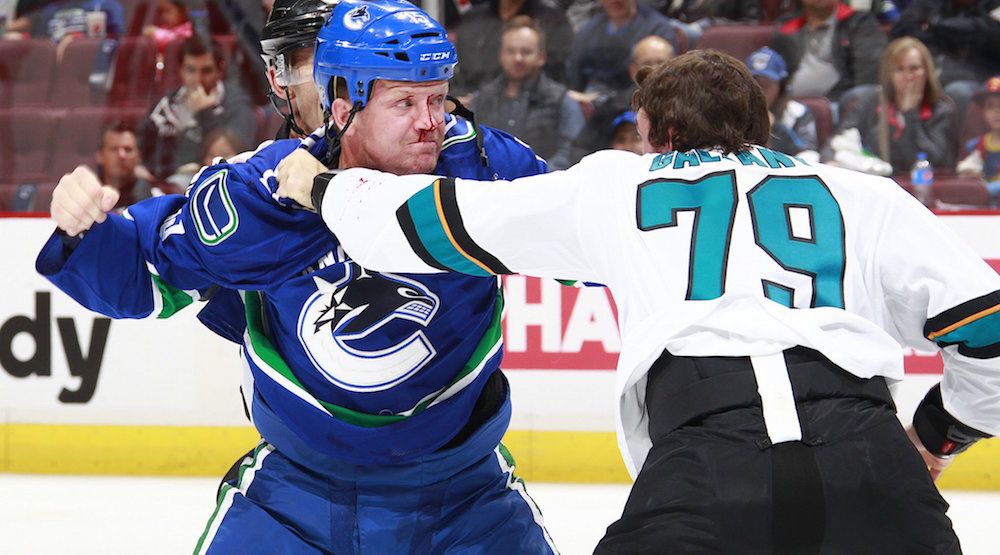 With just two preseason games left, the Vancouver Canucks don’t have a shortage of options for picking their opening night roster in 2016.

They’re coming off a season that saw them slip to third-worst in the NHL, so they would be wise to look at all their options.

GM Jim Benning has gone on record as saying that the team wants to keep eight defencemen this season, a smart move given how often defencemen get injured, which leaves just 13 spots up.

Coming into camp, it was a foregone conclusion that Henrik and Daniel Sedin, Loui Eriksson, Bo Horvat, Sven Baertschi, Jannik Hansen, and Brandon Sutter would make the team. Two other spots should be claimed by veterans Alex Burrows and Derek Dorsett, based on reputation, if nothing else.

That leaves four spots where a strong preseason campaign could be the difference between the NHL and Utica/waivers. Last year a good preseason saw Adam Cracknell and Ben Hutton earn a spot, while Linden Vey and Frank Corrado were tossed on waivers.

Will the same happen this year?

Here are seven players who appear to have the best shot to claim one of the last four spots.

#Canucks are genuinely counting on Anton Rodin and he's not 100% recovered from his knee ligament injury yet: https://t.co/MetzFvdScX

The MVP of the Swedish Hockey League had a few question marks around him coming into camp, notably his health. Anton Rodin has been rehabbing an injury all summer, but has looked good so far.

He has two goals and three assists through four preseason games, which leads the Canucks in scoring. He’s also tied for fifth in league scoring.

He’s also shown a quick release that will surprise goaltenders. He’s a lock to make the team.

Markus Granlund came into camp pencilled in by many as the Canucks’ fourth line centre behind Henrik Sedin, Sutter, and Horvat.

Head coach Willie Desjardins had some interesting comments regarding Granlund after Monday’s game, which should give us a clue for his status.

“I don’t like him as a so-called fourth line centre, because I don’t think he gets enough minutes there,” Desjardins said. “I like him in a different place.”

Let’s assume after two points in three games, that place isn’t Utica. It looks like Granlund will indeed find his way onto the team, but as a third-line winger.

Having Granlund playing the wing tells me that the #Canucks are considering other options like Gaunce and Ruutu possibly being the 4C.

Granlund is a centre who the Canucks are moving to the wing, while Brendan Gaunce is a centre-turned-winger-turned-centre-again.

With Granlund moving to the wing, it opens up a spot at fourth-line centre. Enter Gaunce, who should battle with PTO invitee Tuomo Ruutu for that spot.

Gaunce has looked strong thus far, despite contributing just one goal and no assists in four games. If it’s a race between him and Ruutu, the tie goes to 22-year-old former first round pick over the 33-year-old on a PTO.

Lots of people seem to like what Ruutu's done. Problem is he's 33 years old, and that's kind of a danger age. (See: Higgins, Prust, Burr)

It’s always an uphill climb for players on a PTO, and even tougher when you need to bump a young player off the roster. That’s what Tuomo Ruutu has to deal with.

Also against him: he’s not a natural centre. If they’re open to him playing both the wing and centre, then maybe he has an outside shot at the last forward spot.

Ruutu will need to turn heads if he hopes to make the team. I don’t think he’s done enough yet to warrant a spot.

Jack Skille has been here before. Last year at this time he was on a PTO with the Colorado Avalanche. He earned a contract then, and that’s what he’s hoping to do this year.

At 29 years-old, he’s younger than Ruutu and less injury-prone too. On Monday, wearing the number nine on the back of his jersey, he looked like a motivated Zack Kassian bulldozing to the net on a scoring chance. Also like Kassian: he’s disappointed on the scoresheet, still looking for his first point of the preseason.

The seventh overall pick in the 2005 draft has an outside shot at a spot on the fourth line or 13th forward spot. But again, when you’re on a PTO, it’s an uphill climb.

Willie asked if he would cut Etem any slack given his wife has just had a baby, "Probably not." #Canucks

Emerson Etem has not impressed many with his play so far in the preseason.

He showed good energy at times on Monday, throwing a nice hit and having a couple of scoring chances. But playing with Horvat and Baertschi, Etem’s line did not have a good night by the advanced stats. Etem’s even strength Corsi was a team-worst -10, despite not having to start in the defensive zone all night.

“The big thing with him though is that he needs to score,” Desjardins said of Etem, who has no points in three games.

Will Willie give Etem a break because his wife just gave birth to a baby boy?

“Probably not, I think it’s tough, there’s too many guys that are fighting for spots.

Virtanen skated on his own this morning, Desjardins said he'll be good to go soon.

Lastly, Jake Virtanen, the sophomore winger who unlike last year, can be sent to Utica.

Virtanen could benefit from some seasoning in the AHL to work on his offensive game and because of his age (he’s 20), he doesn’t require waivers.

But Virtanen injured his shoulder in the first preseason game, so he’s behind the eight-ball already. If they’re unsure about his ability to play on at least a third line, it’s an easy move to ship him to Utica to start the year.