No one saw this coming. Tuesday was as much of a roller-coaster ride for Canucks fans as the three days surrounding last season’s Heritage Classic.

That’s saying something considering in that three-day span Roberto Luongo was benched, Eddie Lack was lit up, Daniel Sedin was injured and Luongo was traded.

The amazing thing is how the day started off so normally. Vancouver was down 2-1 in the series against Calgary and fans still truly believed they were going to win Game 4 and win the series in six. But by nightfall so much had happened it felt like a week has passed, not one day.

1. A normal start to the day

Back to the day starting as expected – it began with a debate about the Sedins’ ice time.

Kuzma: Sedins admit they could use more ice time http://t.co/KjfDvscCwW

Trevor Linden appeared on the radio with Sekeres and Price and quickly calmed everyone down, saying it was something minor, maybe Burrows was having a little fun with the media. He said Sven Baertschi (who was called up, leading to more speculation about injuries) would likely not play, and Burr probably would.

In retrospect we should probably have remembered how Linden had no problem convincing CTV he wouldn’t be taking over the Canucks last year despite the opposite being true – but we didn’t.

Linden even managed to get everyone including Matt and Blake talking about normal things like the Sedins’ ice time again by mentioning he’d had a talk with Willie Desjardins about the issue.

2. Burrows goes to the hospital

The calmness didn’t last long. We were hit over the head with this.

In a split second Canucks fans were worried more about Burrows the human than Burrows the player.

A lot of speculation followed. Canucks PR released a statement saying it wasn’t life threatening and the ambulance and hospital visit were precautionary. Didn’t stop a bunch of idiot Flames fans from showing their moronic side, though.

@timmyk16 @timmyk16 …you do know that a broken rib can puncture the lung and make it difficult to breathe or are you just narrow minded?

I won’t give them any more space in this post, though. Let’s be honest, if Michael Ferland went to the hospital, there’d be a bunch of idiotic Canucks fans saying crappy things about him too, and it’s quite simply because idiots are everywhere. Rioters in Vancouver, morons who don’t want Burrows to be treated in Calgary – they’ll all end up in the same place in life, no worries there.

Somehow a reporter in Quebec got the scoop first (and he somehow always manages to do this).

And right before the game, we heard this.

Burrows update: still in hospital, but expected to be released tonight. #Canucks #TSN1040

Those concerned about Burrows’ health could breathe again.

When fans heard Burrows was headed to hospital, their on-ice fears about the injury were tempered by the idea that Baertschi would fit in the top-6 and they wouldn’t miss a beat.

Logic dictated Radim Vrbata would fill in for Burrows alongside the Sedins while Baertschi would jump in with Bonino and Higgins. The win was still a foregone conclusion.

Then this happenened during the pregame skate.

Brandon McMillan with the Sedins; no Baertschi; Linden Vey in for Brad Richardson.

No chance that was happening. Couldn’t be. Logic held out hope:

Desjardins very coy, skating McMillan with the Sedins in warm-up. Vey did take Richardson’s spot between Matthias and Dorsett. #TSN1040

Desjardins was being coy and cunning – throwing Bob Hartley off his scent before throwing down the gauntlet and hammering the truculent, gutsy Flames with so much skill they wouldn’t know what to do.

Skill was everyone’s solution for defeating the relentless Flames’ forecheck, after all.

Baertschi will not play tonight. McMillan will. Lines will be juggled. Interesting one coming up here in Calgary. #Canucks

Why did Willie do it?

@omarcanuck McMillan is #21. Last game Flames put in their #21 (Raymond) and it worked out well for them. That’s the best explanation I got.

In retrospect this is too logical an explanation for anything Desjardins does. Need proof?

Vrbata didn’t start the game with the Sedins. Hansen did. Vrbata kicked things off with the same linemates (anchors) as last game – Bonino and Higgins – neither of whom have been pulling their weight in this series.

Just like that, the game was over before it began.

Desjardins had the horses – prior to Game 4, the Sedins had been great and needed a finisher, Horvat and Hansen were all world, and Dorsett was working his tail off. Yet, he failed to use them while hiding the ones who’ve become liabilities – Nick Bonino, Luca Sbisa, Kevin Bieksa and others.

It really is that simple – play the guys who are going, limit the ice time of those who aren’t. It’s not rocket science and 90 percent of the fans coaching from their couches would’ve done better.

Or go with this guy (Bonino blocking a pass): 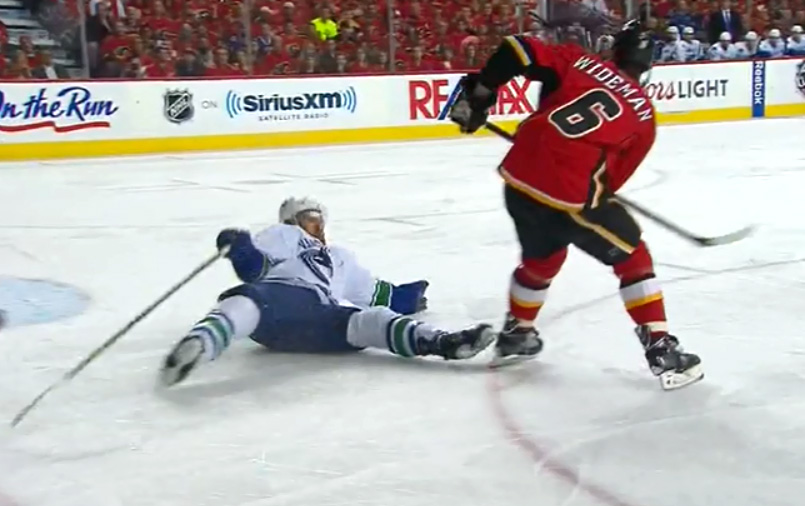 To the fans we go:

That quick shot of Willie telling McMillan to get out there. He was probably like “Me? Still?” #Canucks #vcbcanucks

Let’s give Willie a chance to explain, though. Ben Kuzma asked him to walk through his coaching decisions after the game.

“I don’t think there’s a lot to walk through. Those are the guys we felt would be the best tonight, and that’s who we went with.”

Did it have anything to do with playing the types guys who brought you here?

“No, we had to go with what we think’s our best lineup at this time. All the guys worked too hard all year not to go with who we felt would help us most tonight.”

And how do you need to play Game 5 to win it?

So there was no loyalty involved and Desjardins truly believed he was putting the team in the best position to win.

With McMillan in and Baertschi out.

With Vrbata’s potency wasted alongside ineffective Bonino and Higgins.

With Horvat’s potency decreased because Hansen was taken away.

And with Hansen negated because he’s never been a great fit with the Sedins.

At this point, Sbieksa shouldn’t even be a thing. Where’s Frankie Corrado? Where’s Ryan Stanton?

Both would move the puck better. Neither would panic half as much.

But Sbieksa is a thing. And this is what it looks like.

Even scarier than this picture – the fact Willie has it hung on his wall in his man cave.

As far as Desjardins had fallen in fans’ esteem with his first round decisions, he still hadn’t been dealt the worst insult of all.

But after Tuesday night, and after saying the Canucks played well in the first and third periods, this comparison was deserved.

So, is there any optimism going into Thursday’s game?

Absolutely, but President Linden has to have a long talk with his coach and write step-by-step instructions on that clipboard of his.

Step 1: Vrbata with the twins, and roll them out tons.

Step 2: Hansen back with Horvat, and make them line 2.

Step 3: Matthias and Dorsett spotting in as line three.

Step 4: It’s the playoffs so don’t even bother with line four.

Simple changes, really, though they might be too much for Willie to grasp. The other option is for Miller to shut the door and win the game and series himself.

It’s all so easy.