With the Canucks’ riding a five-game losing streak, the team has lost almost all credit it built up with fans through the first 26 games of the season.

Good thing they won 3-2 in overtime Saturday, but Canucks nation will want to see it against other, non-Albertan teams. Again.

The Sedins managed three points against Calgary but fans will want to see them do that against stronger teams too.

So what did the Canucks gain Saturday?

Well, they ended the losing streak (which was very important), they bagged two points in the standings (which is even more important), they witnessed the birth of a third Green Man (maybe important?), and they scored a goal without touching the puck too.

All in all it was a fun Saturday night game.

Here’s that empty netter scored on their own net by the Flames.

Daniel and Henrik didn’t have a night to remember as far as creating scoring chances – they were minus-1 and minus-2 in even strength corsi +/-, amongst the worst Canucks players – but they stepped up when it mattered.

@omarcanuck oh how I wish that was true….

Silence the critics they did.

The amazing thing about the Sedins is, like the pigeon lady in Home Alone 2, they show up when it matters. Although Chris Tanev scored the OT winner, Hank and Danny did all the work setting it up.

Don’t take any credit away from secret-sniper Tanev, though. He took his time with the puck, picking the top corner and making no mistake on the goal.

After the game Scott Oake asked Tanev if there could be a better way to celebrate his 25th birthday (which was Saturday, btw).

“No. It’s awesome to get the win – to get the overtime winner. It’s good to finally get out of this losing streak.”

2. The spirit of sportsmanship 1

Halfway through the second period, Jannik Hansen was hit by Dennis Wideman in the chest into the boards resulting in a scary moment for everyone watching.

While team trainer Mike Burnsteain was talking to him on the bench, Hansen collapsed. He’s between Daniel and Henrik here – you can barely see him because he’s just fallen forward. 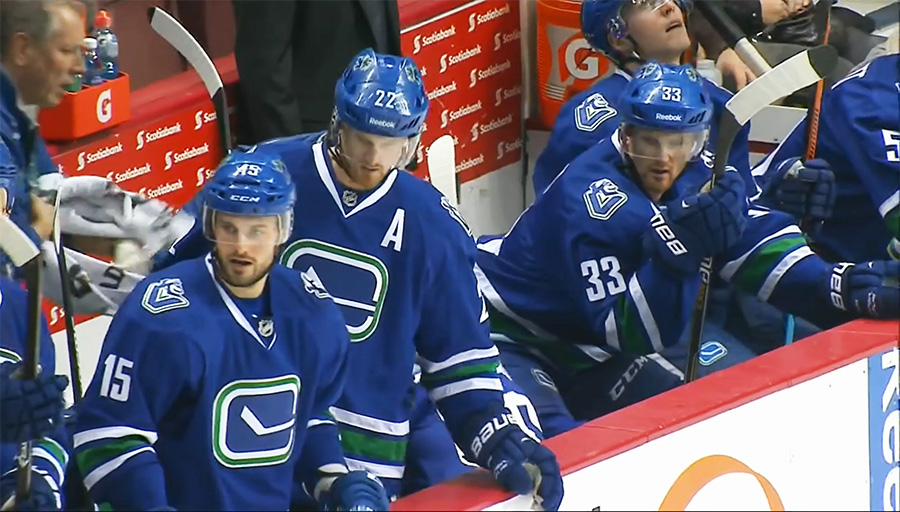 A second later, this was the scene, as Hansen’s teammates were jumping up and down yelling for help. 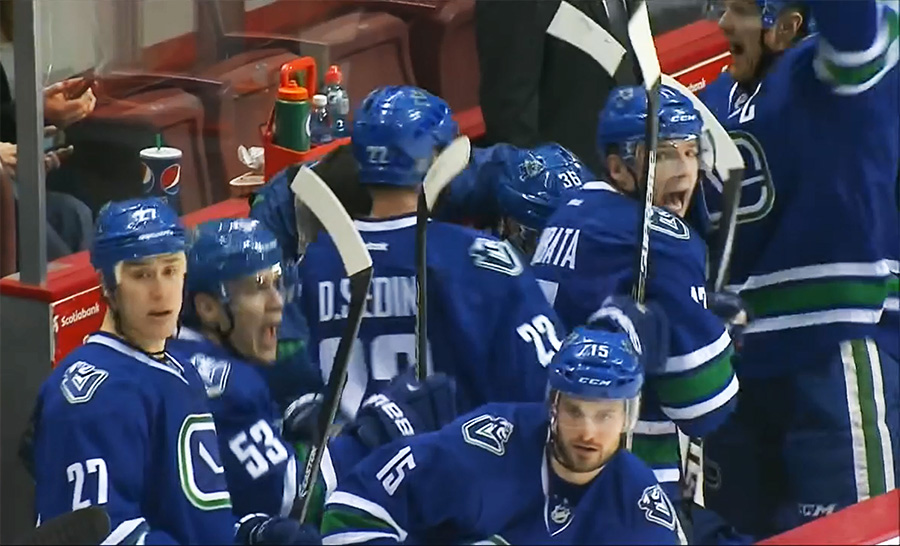 By the end of the period, Sportsnet’s Scott Oake reported Hansen was up walking around and looking okay, but he would be out the rest of the game for precaution. Before he reported that, the Flames Twitter account sent this.

Well wishes go out to Jannik Hansen, who was helped to the #Canucks room after taking a big hit.

Over a week ago, Ottawa’s Chris Neil forced Derek Dorsett to fight him despite Dorsett telling him he had an injured hand. As the fight ended and Dorsett was being held by the refs, Neil got a cheap shot in, which he followed by showboating to Sens fans and acting as if he’d won the fight.

That’s an example of shitty sportsmanship that no one anywhere should emulate.

Early in the first period of Saturday’s Flames Canucks game, Dorsett and Deryk Engelland dropped the gloves. Dorsett’s helmet had come off and as he was falling to the ice the taller, larger Engelland made sure to wrap up his head ensuring it didn’t slam into the ice. 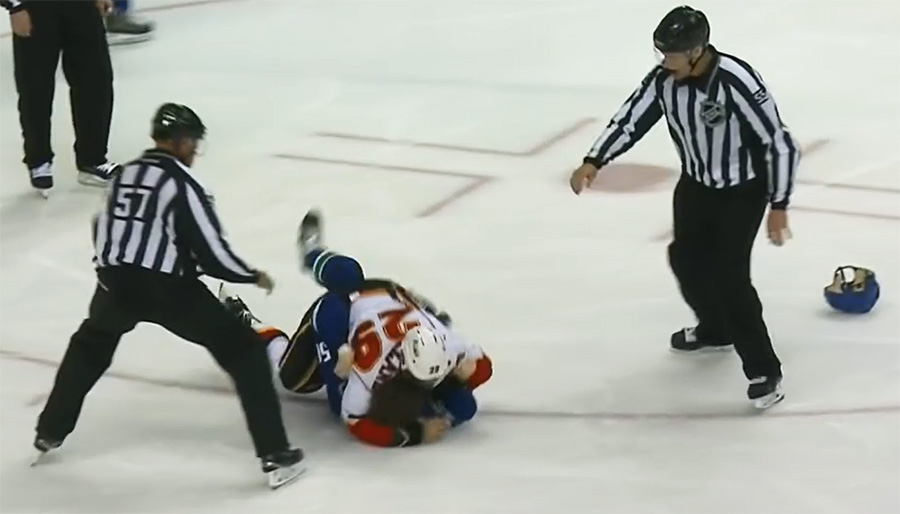 That’s the fighters’ code the way it’s meant to be – you’re trying to do your job and punch the guy’s face in, but you don’t actually want him to get hurt in any serious way.

People have been saying these posts are anti Miller. Look – I’d love to write positive things about him. I did earlier this year when he was playing well, but lately he hasn’t given us much reason to.

Both of Calgary’s goals on the Canucks were questionable.

The first – Miller stopped the puck with his glove, but he missed grabbing it and put it directly on David Jones’s stick.

The second was a shot from Johnny Gaudreau that Miller knew was coming, yet it slipped completely undeflected through his five hole. Before the first Calgary goal, Miller nearly allowed a shorthanded five-hole goal as well.

Miller’s not exactly inspiring confidence or cementing his job as the starter a week after his legendary 5-1 debacle against New York.

To be fair, he did stick with Sean Monahan on a breakaway in the third, keeping the game tied at two.

I wonder how many Luongo haters wish he was the #Canucks starter this yr instead of Miller.. RT: for luongo Fav: if your Lying. #vcbcanucks

@Taj1944 tweeted this during the game, expanding on the trade rumours we reported earlier this week.

Apparently Haggerty’s throwing Kevin Bieksa’s name into the mix of guys who could potentially be traded. Pretty ridiculous to think Bieksa, who has a no-trade clause and has always said he loves playing in Vancouver, would accept a trade to Boston.

Oh, and here’s Haggerty on Kassian:

“He’s topped out at 14 goals at the NHL level, and isn’t going to be the offensive finisher that the Bruins desperately need.”

First, Haggerty’s clueless. Kassian has not topped out at 14 goals – he managed it when elevated to the second line down the stretch last year – an opportunity he hasn’t yet been given this year.

Haggerty’s obviously no pro-scout, but Kassian’s value is not nearly as high as it should be, which is exactly the reason the Canucks need to give him a chance playing serious minutes with some half decent players.

The Green Men announced they would be retiring after one last season earlier this year. On Saturday, we saw that like the Sedins they’ve still got some magic left in their back of tricks.

They brought a third member along, prompting this from PITB during the first period.

And who was that third guy? We found out during the third period… 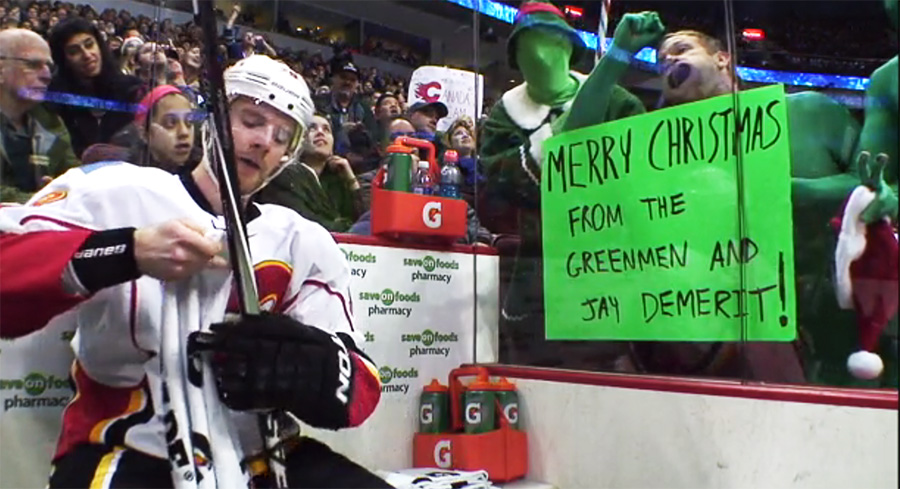 From captain of the Whitecaps to taunting Flames players in the penalty box… retirement really is the sweetest gig.