One hundred years ago, the Vancouver Millionaires won the Stanley Cup. In fact, two popular hockey bloggers of the time, Rob the Caveman Guy and Omarmillionaire, wrote many posts about the team in the VancityBuzz Papyrus.

Here is an excerpt from the entry following their Stanley Cup win:

The Vancouver Millionaires – one of the greatest conundrums in the NHL – have done it again. The team showed up and played like superstars against the Ottawa Senators to clinch the championship trophy. The amazing thing, and what perplexed their coach and fans all season, is that they consistently had trouble giving their best effort against the league’s poorest teams.

As Canucks fans know, the current team appears to take lesser threats too lightly. Fans know this has been the case for several years now. What they didn’t know is it went back all the way to 1914.

Guys, this is my way of telling you the Canucks lost to the Avalanche Thursday. They didn’t show up for the first two periods and they were outshot 31-16 over that span. Vancouver played well in the third but it wasn’t close to enough and they lost the game 4-1.

It was not real good or even good. It was not a happy moment. But you know what? We’re going to focus on the positives today because it’s the right thing to do.

1. Check out the standings

First of all, let’s look at the standings. 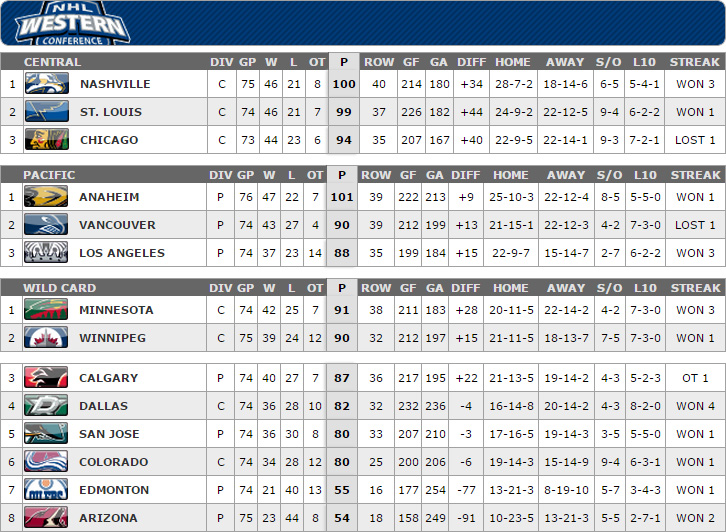 See the Pacific Division – that’s Vancouver staring down their noses at L.A. and Calgary (let’s ignore that the Canucks are standing on their toes so they can stare down their noses).

Do the Canucks have some big games coming up? Yes. But don’t worry, people – they’re against really good opponents. Strangely enough, this may work in Vancouver’s favour.

2. Check out this power play goal

Remember when Yannick Weber finally made it onto the first power play unit Tuesday against the Jets and then he scored a goal?

He did it again on Thursday.

Ok, so maybe it wasn’t the most power-playee goal you’ve ever seen, and maybe as much credit should be given to Avs backup goalie Reto Berra as is given to Weber for the goal, but we are looking at the positives here.

3. The quote that won the day

Ray Ferraro made his daily appearance on TSN 1040’s afternoon show Thursday and the guys were talking about how bad the white pants portion of the Millionaires’ jerseys looked.

One of them (I believe it was BMac) said something about Moj wearing white pants. Ray’s reply:

“Moj in white pants is like a drive-in theater.”

Told you we’re trying to lighten the mood here.

Oh and as a side note: Moj, BMac and Taylor doing the afternoon show together is quite an enjoyable listening experience. Surprising? Maybe. Entertaining? Definitely.

4. When Vancouver last won the Cup…

With the Canucks wearing Millionaires jerseys and celebrating the 100 year anniversary of Vancouver’s Stanley Cup, the #WhenVancouverLastWonTheCup hashtag was flying around. Here are some of the funnier tweets.

#WhenVancouverLastWonTheCup Brian Williams had the play by play.

You mean he didn’t disappear for ages only to pop up for the Olympics every two years?

Jagr had already been in league 5 years #WhenVancouverLastWonTheCup

His beard was just starting to have a couple of white whiskers then.

The puck was a piece of coal #WhenVancouverLastWonTheCup

I can picture Blake reading out the telegrams.

“We’re receiving a telegram from Tanbir here: The Millionaires sadden me STOP I am highly angered at the moment STOP Sbisa is a buttox STOP Yet I still believe we shall win the Cup STOP”

5. Winner of When Vancouver last won the cup

The photoshap crew held a Vancouver Millionaires photoshap contest during the game.

I created the title image of this post for it, but change never came and I didn’t feel right submitting it.

Here’s the winner of the contest.

Though this entry was the one that had me ROFL and LMAO.

Don’t think this slogan would have captured the everyman hockey fan in this town quite so well pic.twitter.com/z0vC7LozgL