Speculation going into this game was that Mr. Béliveau’s pregame ceremony would pump Montreal up and leave Vancouver flat.

But the Canucks came ready to play, and one minute into the game Nick Bonino had a glorious chance to score, foiled only by a regular Carey Price save (meaning it was jaw dropping).

Very fast 1st period.. Nice to see the boys have this kinda jump in game 7 of a road trip.. #vcbcanucks

After that chance, the Canucks remembered they shouldn’t try to win as it would ruin the night in Montreal, or they realized how tired they were at the end of this seven-game road trip…

though Ryan Biech thought he had them figured out when he tweeted this during the first.

If that was their strategy, they forgot the second part of it (some would call it the most important part) – taking over and winning the game. From the shot chart, you’ll see what I mean.

Montreal went up 2-1 with five minutes left and they never looked back, winning by a 3-1 score.

You don’t need to do much more than look at the game’s shot chart (from war-on-ice.com) to see how the game went. 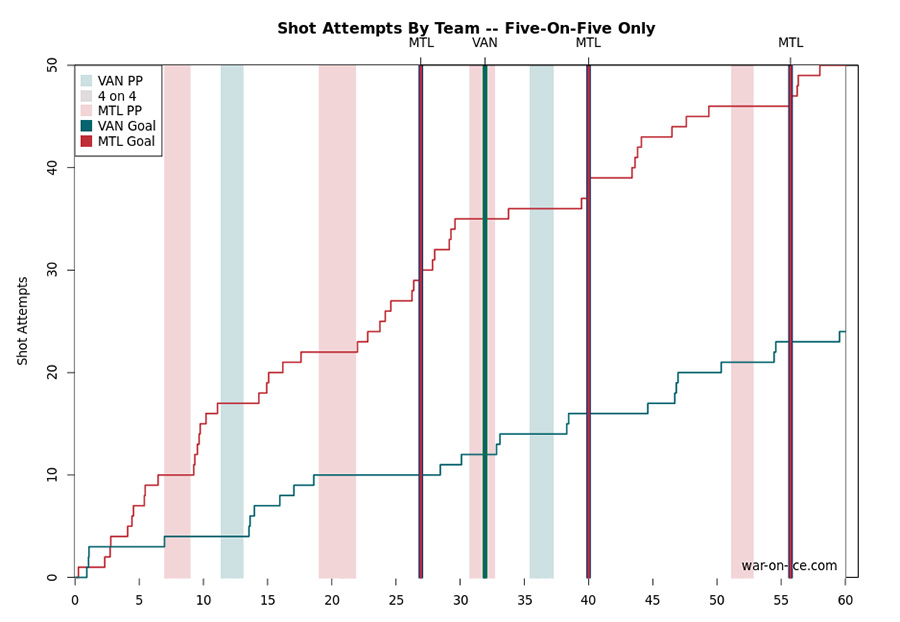 The Habs took over after the second minute, and while they didn’t dominate the scoreboard – the game was a 1-1 tie until the 15th minute of the third – the ice surface looked like it was sloping towards Vancouver’s net for the rest of the game.

2. Vancouver’s best players were their…

Most nights this season if you looked at the corsi chart you’d see Radim the dream right at the top, followed by the Sedins. Alex Edler has consistently been in that mix too. The second liners – Nick Bonino, Chris Higgins, and Alex Burrows – have been right behind them, until the few games prior to the one in Montreal.

The top line was bad.

The second line actually created Vancouver’s best chances, especially in the third, but from the 35th minute, Bonino was replaced by Bo Horvat at centre. He did well, but that tells you how well they were doing before the change.

3. Hansen and a nice shorty

For a brief moment in the second period, Canucks fans had hope. It came when the Canucks scored an unexpected shorthanded goal (I know that’s redundant), tying it up at 1-1 and keeping themselves in the game.

And who else would be on the receiving end of an extremely difficult-to-control aerial pass from Kevin Bieksa, feathering it over to Derek Dorsett for the goal, but Jannik “no-hands” Hansen.

Even in the worst Canucks games, Hansen’s proving his doubters wrong.

TSN’s Aaron Ward made an appearance on TSN 1040 Tuesday morning, and when Dave Pratt asked listeners to submit their comments through the regular channels, Ward used it as an invitation to go off…

“I’m sure there’s some bloggers out there in Vancouver who would love to do that… I was doing a game, and one of the morons decided to go at me but doesn’t tag me on Twitter.

I love to do this – everybody’s like, ‘Oh my god, you search your name on Twitter?’ and I’m like, it’s not so much narcissism, it’s idiocism – I try and weed out the morons that sit there, and they actually follow you and take your information, whatever you’ve got going, and they’ll write something about you and go with it.

They also decide to rip the crap out of you whenever they can, but they don’t tag you. So, they love to be critical of the mainstream media, but when it comes down to having anything to do with the media, some, not all – actually there’s a whole bunch of guys I love going back and forth with… – but there are some absolute morons who I cannot believe call themselves (clears throat) bloggers, and if I’m a blogger and it was a union, I’d kick them out.”

So who was he talking about? On Monday, our own Ryan Biech wrote this tweet.

I won’t believe any Bruins trade talk until Aaron Ward tweets and confirms it.

Sure, it wasn’t original, but it definitely wasn’t mean spirited.

We’ve seen Wardo and many others make jokes referencing his trade-deadline error too – mistakes happen, he owned it, it’s cool – and Ryan thought he was making a harmless joke.

@ryanbiech Hilarious and original. You write for a living? Sorry

Can’t take a joke? RT@TSNAaronWard: @ryanbiech Hilarious and original. You write for a living? Sorry

Thought it was done there, but after the appearance on the morning show, Ward had to have the last word.

@RobTheHockeyGuy @ryanbiech I didn’t call you guys out by name,why so sensitive? I blocked who I was referring to. I let it go days ago.

From Ward’s radio rant, it’s clear he was talking about Biech (who, btw, is doing strong work here at VCB and should not be kicked out of the bloggers’ union). Guess sometime between Wardo’s deadline-day error and now, he forgot how to own it.

I asked John Pitarresi (@OD_Pitarresi), our correspondent from the magical land of Utica, for an update on the Canucks prospects. Pitarresi covers the Comets for the Utica Observer-Dispatch.

How are Hunter Shinkaruk and Brendan Gaunce playing? Do you think they could fill in if the Canucks have an injury? (they’ve managed 9 and 8 points in 24 games respectively)

The point totals are a bit low, but no one on the Comets is really piling up points. The team just doesn’t score much. Both are getting better all the time.

Shinkaruk shows great flashes on occasion – speed and creativity. Gaunce usually has lined up with Wacey Hamilton and Carter Bancks, and they’ve drawn a lot of praise for their possession and forechecking.

Both are responsible players working hard at both ends. Are they ready to fill in up there? Tough question. I’m guessing they are a little green yet.

Do you think Brandon DeFazio could be a scorer in the NHL? (14 points in 23 games)

He’s tireless, he does everything well, he’s a team player, he’s willing to do the dirty work and fans love him. He is a dirty goal kind of guy, with a great nose for the net and he leads the team in shots (65) by a wide margin.

Can he score up there? No idea, but his personality is more that of a fullback than a tailback or wide receiver.

Are there any other standouts amongst forwards?

There were a lot of guys looking good after a 3-game road trip that resulted in 5 points – including picking up one without scoring a goal (against Oklahoma City).

The veterans have been excellent – Cal O’Reilly, Dustin Jeffrey – and Alex Friesen has played well since coming back. Two interesting ones – Ronalds Kenins, the kid from Latvia, has shown very well. He’s strong and smart. I think you’ll be hearing more about him.

Alexandre Grenier is a much better player than he was a year ago. He’s seeing the game better, being creative and he’s a presence on the power play.

Has anyone stood out to you on defense? Who would be the next call-up after Corrado?

The defense is really beat up – four of the top six did not play on the trip. Bobby Sanguinetti and Alex Biega have played well and Biega deserves a look.

(Ed note: Amongst d-men points, Sanguinetti is tied for 14th in the AHL, and Biega for 35th)

On the goaltending – is Joacim Eriksson a step down from Jacob Markstrom?

Markstrom (broken finger) might be back this week. I don’t think there was much of a dropoff with Eriksson at all. Markstrom wasn’t at his best in the last couple games I saw. I think you could flip a coin and not go wrong. Cannata is not far behind, either.

Couldn’t write a post about this game without including the tribute to Mr. Béliveau.

A few Canucks players and coach Desjardins had some words about Mr. Béliveau after attending his wake on Monday.

Burrows: “My grandma was a big fan of his. he was her favourite player.”

All the stories we’ve heard about him since his passing last week remind us of how hockey players used to carry themselves and why Canada is so proud of the history of the game.

Mr. Béliveau was one of the best players ever, but he was more importantly a role model who found time for everyone. That humility and class is what we’ve come to expect from all hockey players. Mr. Béliveau set the example for everyone who followed.

Montreal did a wonderful job on the tribute, which you can watch again here.

A couple of lines from the song, translated: