The Canucks continued their 7 game Eastern road trip with a disappointing 5-2 loss to the Toronto Maple Leafs. It is not so much that the Canucks lost, but how they lost. Let’s just say that Ryan Miller’s play didn’t exactly squash the Eddie Lack supporters.

Disco Stu (@StuElmes) hits the nail on the head with this tweet. Then follows it up with another gem. When you are right Stu, you are really right!

Dear Morons, Eddie Lack is not our best chance for continued success this season. Sincerely, Reality

3. No Quit In Canucks

The Maple Leafs really had no business being up in this game the way they were, but the Canucks just kept coming. Does this year’s team show any of the characteristics of last year’s? Not at all.

Love the no quit in this team. Nice to see them be the best team on the ice even though they are down 2… #tanev #vcbcanucks

Nice to see Daniel Sedin scoring again regularly. It wasn’t so much the goal he scored, but he had some serious velocity on the 3rd period power play shot that rang off the post. It bodes well for the Canucks if Daniel can return to even 75% of the sniper he used to be.

This hit was pretty nasty. Shawn Matthias did not return to the game and looked pretty out of it when ushered into the Canucks dressing room. I would think this is a suspension, but we all know that there is a different standard the NHL uses when a Canuck is involved. Let’s see if they get this right. It should be a 2-gamer. Funny enough the Hockey Night In Canada crew spent the intermission focussing on Alex Burrows snow shower of Jonathan Bernier rather than discussing this hit.

How do you know that your friend is a die-hard Leafs fan? Prior to the start of the game my buddy texted me that the Canucks were getting a break because Leo Komarov wasn’t going to be able to dress for the game tonight. In actuality, I think the Canucks game plan revolved around Komarov and “Lightning Leo” not being able to lace them up tonight really threw the Canucks for a loop. Like the Leafs or not (and I hate them), you have to love their fan’s passion! 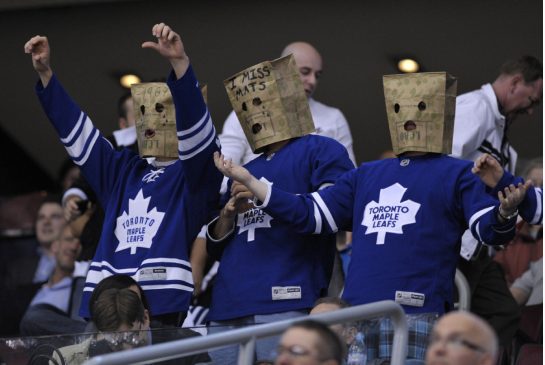 No worries Canucks fans! The Canucks are 3-2 on this 7 game road trip and play a struggling Ottawa Senators team tomorrow.