The game billed as Luongo vs Lack didn’t disappoint, with the two goalies matched up against each other in a showdown in the shootout. And now for the real stories of the game in our post-game SixPack (feel free to drink a SixPack while you read this): 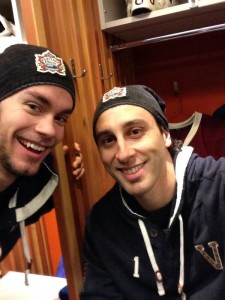 Lots of talk about the “bromance” between Lack and Luongo on the broadcast today. I thought both goalies played well (though neither were spectacular), both having to deal with some suspect defence in front of them.

Congrats to Alex Edler Minus 30 is harder to get to than most realize.

Lots of seats here to choose from, Bieksa found a great one for that goal

2. All aboard the Jensen Train 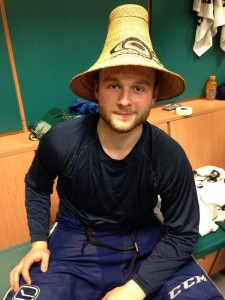 Count me as one of the people that was a little skeptical about what impact Nicklas Jensen could make in the NHL, considering the way he struggled for a large part of the season in the AHL, but boy was I wrong. Jensen has to be the biggest bright spot for Canucks fans right now. The kid is showing that he belongs, and just might secure a regular spot in the Canucks lineup next season (though there’s lots of work to do before then). He scored again tonight and has fit-in well with Henrik Sedin and Alex Burrows. The trio seems to have found a bit of chemistry, as they were on the ice for all three Canucks goals. In case that wasn’t enough, Jensen also seems to be a reasonable option in the shootout. 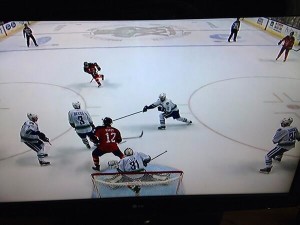 It hasn’t exactly been a great season for Jannik Hansen so far this season. The picture above shows Hansen chasing well out of position on the penalty kill for Florida’s first goal. His man is the guy shooting the puck on the point, but instead he is on the bottom right side of the picture. Yikes.

4. “You know they play soccer before the games…” 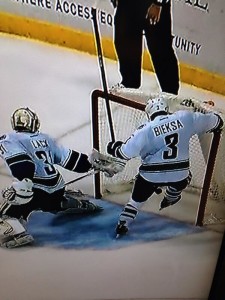 Bieksa can be one of the most infuriating players to watch at times, but it’s plays like this that keeps him in my good books… at least for now.

Bieksa, a better goalie than Hamhuis. He controls his rebounds better.

Ever wonder why all the empty seats in Florida, particularly the best seats at centre ice? Even when the lower bowl is pretty full, the section at centre ice is often pathetically empty. Well it turns out there is a reason for it. It’s all part of an ill-advised upscale section called “Club Red” that isn’t exactly popular.

Thing about Jensen and Matthias: they’re trying to prove they belong every shift. That’s the great thing abt having young players in lineup

I have really liked what I have seen from Shawn Matthias so far and it seems Torts likes him too. Matthias had almost 23 minutes of ice time today and looked very motivated to stick it to his old team. Matthias, who scored 14 goals in 48 games last season, looks like he will solidify their third line centre position for the first time since Manny Malhotra’s eye injury.