If you’ve watched the Canucks this year, you saw this coming a mile away. Columbus, the fifth worst team in the NHL, coming into town on the second half of a back-to-back; the Canucks well rested and on a two-game winning streak – easy win, right?

The Canucks lost 6-2 in the end. And now we try to cheer you up.

Before giving up on your team Canucks fans, take a look at this and breathe. 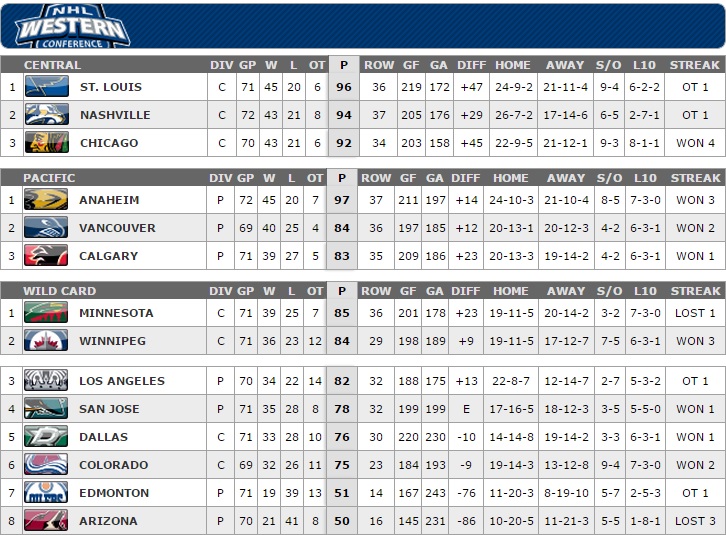 While losing to the lowly Blue Jackets was depressing, disappointing, pretty pathetic, it’s not even close to the end of the world. The Canucks are still looking good to make the playoffs.

And on the bright side, this loss to Columbus should give Vancouver extra incentive to come out flying against the Kings on Saturday.

Last June, Gino Odjick wrote a letter to the fans containing some shocking news. From the letter:

About two months ago I was diagnosed with a rare terminal disease called AL amyloidosis… It’s hardening my heart and my doctors aren’t sure how long I have to live. Initially they thought years, but now they think it could be a lot less. I could be down to months or even weeks.

The prognosis wasn’t good back then but in February the Vancouver Sun published a positive update on Odjick. From Gino’s mouth:

I’m low on energy sometimes, but I’ve had nothing but good news since (I began treatment) in Ottawa. It was touch-and-go here before I went, but things have straightened out and I’m pretty happy about that. The doctors were surprised and happy at the same time.

If that Gino update didn’t make you smile, maybe this tweet from the Canucks during the Columbus game will.

Now there’s a ticket promotion fans can stand behind.

If you didn’t watch the game you’re probably wondering if Eddie Lack was the problem. That or you saw he allowed five goals and already decided he was.

Vancouver continued the sloppiness in this fashion and Lack was pulled halfway through the third after letting in five.

Pretty much sums up the Canucks’ defense after the first period.

Before you finish reading this, you should realize the Canucks looked like they were ready to play against Columbus.

They looked so ready that they had their best period this season in terms of shots on goal, with 20.

Once they had the 2-0 lead early in the second, most fans (and probably all the Canucks) thought the game was over.

This quote from Daniel Sedin tells the story.

Daniel: “It is one thing losing to a team if they really get going and play real well, but I thought we gave it to them.” #Canucks

Lots has changed since this time last year.

The Canucks are sandwiched between Anaheim and Calgary for second in the Pacific Division rather than looking at the playoffs from the outside.

Part of last year’s problem was bad luck – the Canucks suffered so many injuries to key players last year – Santorelli, Henrik, Burrows, it would take too long to list all of them here – life really was unfair.

But a big part of it was coaching too.

Yesterday, Ed Willes wrote a column in the Province, where certain players talked about the differences in coaching last year to now.

John was my way or the highway. The player-coach relationship was different. Willie is a lot more down-to-earth. I don’t think I’ve heard him chew out a player yet…

It’s the four lines… (Desjardins) wants us to be a deep team. John’s thing was we have to win this game, then we’ll worry about the next game. He played some guys too much and didn’t trust the fourth line as much…

The first day of camp was one of the hardest practices I’ve ever had… We’re not out there a lot but we practise hard for 45, 50 minutes We didn’t practise a lot last year.

Maybe last year guys felt they didn’t need to show up because they were going to play for seven minutes… You can’t win that way.

It’s not exactly breaking news that Torts was a disaster and Desjardins is doing much better, but it’s always amazing hearing the players talk about it. Especially the Sedins, who usually stick to some variation of “Torts is a great man,” when asked about the coaching change.

With Senators fans throwing hamburgers on the ice for Andrew “the Hamburglar” Hammond in Ottawa, you couldn’t blame Lack for wishing Canucks fans might toss some of his favourite food out for him.

This tweet from the Canucks – it didn’t look like a good idea. Inviting fans to throw (extremely messy) food items – or anything, for that matter – on the ice is never a good idea.

Alas, the empty seats at Rogers Arena didn’t oblige. No tacos appeared on the ice despite Rob the Taco Guy’s helpful tweets.

Taco Time: bad tacos, but they’re cheap and probably would be easy to throw pic.twitter.com/SYPekMp2rs

The only thing thing thrown to the ice in this game was the Canucks pride, along with the two points they could’ve used.

@omarcanuck it’ll be the taco the town