What a game. What an incredible victory. Seriously. Calgary beat L.A. 3-1. Wow.

@omarcanuck too many other good games.

Brad was watching the end of the Flames game, by the way.

Back in Vancouver, the Canucks were taking care of business. For those who were watching, things went well. The Canucks dominated Arizona 5-0, Eddie Lack grabbed his second shutout of the season, and Dan Hamhuis finally scored.

Playing against the lowly Coyotes, Eddie Lack didn’t have the toughest night of work. Still, Vancouver allowed some high quality shots at the end of the third, making him work for the shutout late in the game.

Hey @eddielack, I found you a new avatar. #Canucks pic.twitter.com/oox1u3Rxuq

Paterson asked Lack if he feels like starting Game 1 should be his opportunity if Ryan Miller’s healthy.

“I don’t really feel that I’m the guy to speak about that. I’m sure Willie and the coaching staff have a plan and I’m just going to try my best during practices and everything. I probably have one more game. I’m just going to prepare myself as well as I can for that and we’ll see what happens.”

Paterson wasn’t convinced, so he followed up his question, leading to this wonderful exchange:

Paterson: How badly do you want to play in the playoffs?

Eddie (cutting Paterson off): That’s a stupid question you know?

Paterson: I ask a lot of dumb questions.

Eddie: Obviously I really want to play. I’ve been feeling good lately. It’s been a fun run here, battling to get in and everything, so obviously I want to play.

So which way is Willie Desjardins leaning? This from Monte Stewart’s sports blog:

“You never make that decision right now,” said Desjardins. “That decision will be made before the first playoff game. But, saying that, I think Eddie’s played really well. We needed him to step up. We had a lot of hockey left without Ryan, and he did a terrific job for us and he certainly got us into the playoffs. So you always take that into consideration.”

Is there a point in continuing the media circus surrounding the starting goalie decision for another week? Desjardins could end the debate right now by telling the world Lack will be in net for the Canucks next week.

I know after what Vancouver’s gone through with its goalies, the fans want no part of the it.

Don’t think they’ll have a choice though. Perhaps we should appreciate Willie D’s homage to the Canucks storied history as he drums up the goaltending situation.

While Dan Hamhuis has had an up-and-down season – battling through injury, deciding to forego surgery and keep playing, looking slow at times, being a steadying force at other times – one thing that hasn’t been up and down is his goal scoring.

It’s been down. Only down. Coming into Thursday’s second last game of the regular season, Hamhuis had zero.

Not that he’s ever put up big numbers in terms of goals, but in case you’re wondering, zero would’ve been a career low.

But Daniel Wagner saw something.

Dan Hamhuis looks like he wants to score his first goal of the season.

After Wagner tweeted this, Hamhuis split Arizona’s defense and nearly scored what would’ve been one of the Canucks top-five goals of the year.

He didn’t end up scoring there, but he did score later.

And then we saw something even more rare than a Hamhuis goal. He smiled.

While the Sedins scored a beauty to get the Canucks on the board, we’ve talked about them tons in the SixPack this year. A guy we haven’t talked about enough is Yannick Weber.

Closing in on the end of the season, Weber’s getting a ton of attention for the Canucks’ unsung hero award. His two goals against the Coyotes, getting him to 11 on the season, will help his case.

Canucks fans can dream, can’t they?

4. Sbisa is getting PAID

Any chance Charles Dickens was looking into the future at April 7/8, 2015 in Canucks history when he wrote that?

On Tuesday, the Canucks clinched a playoff spot when Edmonton beat L.A. The very next day, Vancouver announced they had signed Luca Sbisa to a 3-year contract extension that will pay their most mistake-prone defenseman an average of $3.6 million each season.

Speaking about Sbisa’s contract on TSN 1040 Thursday, Bob McKenzie said top-four defensemen are worth about $4 million in the NHL, and given Sbisa hasn’t been a top-four guy in Vancouver, his contract “is little bit higher than what some people would say is acceptable.”

Take it for what it is – McKenzie lives in Toronto and hasn’t watched every Sbisa game as closely as locals have. It’s a blanket statement about what a 5-6 defenseman should be worth.

Rhys Jessop, on the other hand, is someone who has watched Sbisa play every game, and is an expert at looking at the underlying numbers. Rhys heard people talking about how Sbisa has improved through the season, and he looked for proof.

Rhys included this graphic and the below analysis in his Canucks Army article: 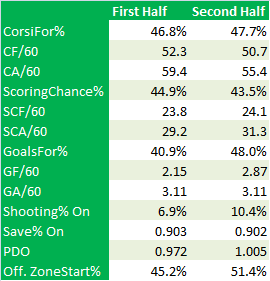 Despite a rather significant upswing in offensive zone starts, Sbisa’s Corsi For percentage and ScoringChance percentage have remained close enough to his first half rates that we can say they’re basically the same. Sbisa is still getting routinely out-possessed and, more concerningly, remaining extremely permissive as far as scoring chances against go.

There’s a lot more in the article, but here’s Rhys’ conclusion on Sbisa:

There’s really no sugar coating it: right now Sbisa is not good enough to be an NHL regular. He’s been terrible this season, and terrible for every other season of his NHL career. Since 2012, he has been one of the very worst defensemen to receive regular NHL minutes.

And on the idea of the Canucks signing Sbisa (keep in mind this article is from March 19):

(Sbisa’s) “put-up-or-shut-up” seasons should have been the last couple of years and he simply has not done enough of the ‘putting up’ to warrant a team committing nearly $3 million to him.

I highly doubt that Canucks brass are delusional though, so even if Sbisa is back next season, I can’t see it being for more than one year.

Oh ye of too much faith, Rhys.

So is Canucks brass delusional? Jim Benning spoke to the media about signing Sbisa later yesterday.

“He plays his best games in those heavy games (against Anaheim, LA, San Jose). He’s a guy that can separate forwards from the puck. He has the strength and he’s young.”

“He’s been good for us. That one stretch when we had three defensemen go down on that road trip out east, he really stepped up. He was one of the leaders back there. He’s continued to improve all year. He’s physical. He blocks shots. He’s an old kind of throwback, stay at home defenseman.”

What’s scary is the numbers say the opposite of what Benning believes to be true. It’s clear the Canucks see potential in Sbisa and that’s what they paid for, but is it well placed?

From watching Sbisa, you realize he’s pretty much the opposite of Chris Tanev. Tanev almost always makes the right play. He stays calm, reads the opposition correctly, and always makes a smart clearance or pass. He makes great decisions.

Sbisa does not. This season he has panicked, he has given up pucks countless times, and he has done this consistently. Where Tanev has all the mental game a defenseman can have, Sbisa has none of it.

You might say at 25 Sbisa has a lot more learning to do, and he should be given a chance, Problem is he hasn’t shown signs of having that mental game.

Oh and one more thing – the best argument I’ve seen in favour of Sbisa’s contract: “Pretty sure Jim Benning knows more about hockey than you.”

Given his resume, I’m sure that’s true. All that knowledge didn’t help him with Sbisa’s contract though.

The secret to Sbisa’s contract

Given the above, this comic may be the only explanation for Sbisa’s contract.

5. The goods on Dorsett’s contract

We’d be remiss not to mention Derek Dorsett’s contract extension – four years at $2.65 million per.

For a fourth liner, it’s a lot, according to McKenzie: “It’s unusual for those guys (fourth liners) to get four year contracts.”

According to Benning, Dorsett “has the heart of a lion” and he’s a mentor for young players as well.

Given that information, I’ve put together this line-by-line breakdown of his contract:

Not so bad when you look at it like that, no?

Being serious, Dave Tomlinson made a great point on the pre-game show today. He said if Benning had to pay a little extra to avoid having a no trade clause in the contract, it was worth it. A depth forward with the Dorsett’s playoff experience will be easy to trade to a team getting ready for a long playoff run, so the risk is pretty low.

With all that happened on the NHL scoreboard tonight, let’s take a minute to appreciate the Canucks first round matchup…

I have never been so happy about a Flames win in my life.

Canucks fans cheered for the Flames, they were happy Calgary won, and they assaulted Twitter with an endless torrent of pro-Flames tweets.

Thankfully, they can now stop that nonsense.

The Flames are officially public enemy number one. This is going to be fun.