Start training the riot police (Vancouver’s version of “plan the parade route”), this Canucks team is for real.

When Jim Benning was hired as GM, he said he was going to add depth up front, specifically to the bottom six. Twenty-six games into the Canucks’ season, we can stop wondering if it’s just an illusion.

Vancouver’s depth proved itself once again on Thursday as the third liners scored all of their goals.

The Canucks won 3-0 over Pittsburgh – the NHL’s third ranked team before the game. They shut out the team ranked third in goals scored. They dominated Sidney Crosby, Evgeni Malkin, and the Eastern Conference powerhouse Pittsburgh Penguins.

And they got the shutout with Eddie Lack in net.

1. How Lack got this game

By now you’re probably aware of how Lack became the chosen one to start against Pittsburgh. Aware or not, it’s a wonderful tale, and I present it here.

It all began on Tuesday, when it looked like Lack would play against the Capitals (meaning Miller would’ve faced the Pens).

No. 1 PP unit working Lack’s side at gameday skate. Often a sign for who starts in net

But something changed before Desjardins addressed the media.

Miller will start. Willie was leaning lack but miller made what the coach thought was a good point

Miller said it would be more difficult for lack starting a day after a team day off. Easier to go with the guy who has been playing

That decision started an intense debate amongst fans and media. Was Miller protecting Lack from the rust he’d have from not practicing Monday (Botch thought so), or was he instead protecting himself – taking on the weaker Capitals while throwing Lack to the wolves/Penguins? (Taj’s conclusion).

Miller taking the Pitt game off. So much for the him “looking out for Eddie” BS everyone was saying. Poor Lack getting treated like crap.

I thought Miller was the Canucks #1 goalie? He’s not starting vs Pitt. Why not? Why throw Lack into that game after not playing for so long?

While Taj is the captain of the #TeamLack movement, and certainly one to stir up controversy, he supported his argument, as he often does.

Taj tweeted a link to an article showing that Ryan Miller’s record against the Penguins is pretty crappy.

Miller’s numbers versus the Pens are not very good. His career SV% of 0.886 is his lowest against any team in the NHL. His GAA is only worse against the Detroit Red Wings, at 3.30 with a 0.909 SV%.

Was Miller trying to avoid one the teams he hates playing the most? No idea.

One thing we do know, Eddie Lack’s mom was so worried about her son’s state of mind before the game, she felt the need to calm him down.

Good luck tonight @eddielack nothing to be afraid of pic.twitter.com/XJJEdL1Jnl

Yes, that’s actually a tweet from Eddie Lack’s mom. And yes, his mom is way cooler than yours (and mine).

Hey, we don’t know what happens behind the dressing room’s closed doors or on the team plane. Maybe Wyatt’s got it right.

After the game, Murph asked Lack if he agreed with Miller’s call to take the Capitals of his hands. Lack’s reaction (and make no mistake about the drawn out welll and pause after – it told the real story):

He’s right. It worked out. Guess Taj earned this one.

Is Ryan Miller gonna steal Eddie Lack’s spot in the Three Stars of this game?

And if I didn’t think the Canucks might eventually go with Lack come crunch time, this might be a good idea.

Pittsburgh could use a goalie the #Canucks have one you could trade for. Malkin or Crosby will be fine #VCBCanucks

Check out the Canucks 5-on-5 corsi numbers from the game (from war-on-ice.com): 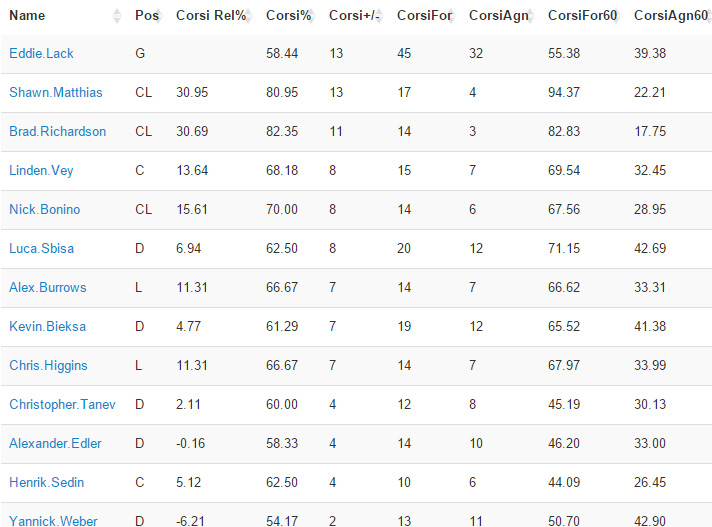 That’s Shawn Matthias, Brad Richardson and Linden Vey right at the top. And for the old fools who hate advanced stats – the trio passed the eye test too.

The third line was magical. They dominated the Penguins like an NHL team against the Oilers. They also prompted tweets like these.

Man, when Vey and Matthias play well, they both look like mini-Berts. Richie’s not hurting them, either. #Canucks

Penguins fans were pretty steamed about Ryan Stanton’s hit on Horqvist, which you see at the start of the clip. Richardson took a viscous slash from Simon Despres to make the pass to Matthias from behind the net, though.

And adding to the lore of Jannik Hansen’s 2014-15 season, here he is forechecking the hell out of Pens’ goalie Thomas Greiss and setting Richardson up for a shorthanded goal.

Travis Green, coach of the Utica Comets was on TSN 1040 with Matt Sekeres and Blake Price today. Some of what he said made me excited.

Matt: Are you worried that (Jacob) Markstrom’s injury may have broken his momentum here? (Markstrom has a broken finger)

“No, not at all… He takes good care of himself… The injury is probably going to be 10 days or two weeks. He hasn’t even been off the ice. He’s practicing every day – he puts a blocker on both hands and works on his movement. I actually expect him to come back and be just as good or better.”

On Hunter Shinkaruk (who has 4 goals and 5 assists in 23 games this season):

“For the average fan who doesn’t know the AHL that well and think some of these first round picks are going to come in and score the way they did in junior, it just doesn’t work that way… He’s learning to play against men, learning to get leaned on.

The thing I really like about Hunter is the compete level… He’s determined to do whatever it takes to play in the NHL. He’s going to get better as time goes on. He’s going to get stronger… His offense will definitely start to progress when he learns the league and when he gets stronger.”

“Gaunce is one of those guys who’s a big body. He’s extremely smart. I’m not too worried about his point totals. When he becomes an NHLer he’s going to be one of those guys who plays up and down your line up, kills penalties, matches up against top lines, is a complementary guy on the second line.”

The Canucks just shut out the Pens and are hanging out near the top of the NHL standings… and they’ve got prospects in the pipeline too. Get excited, people.