Sunday’s Canucks game against Nashville was not completely boring. I’m not joking! After the first period, fans were in disbelief.

When’s the last time a Preds game has been this exciting?

Entertaining period between the Canucks and Preds. Is a sentence that hasn’t been written a billion times.

Anyways it didn’t last. Twitter’s take on the second and third periods:

Did I start watching the walking dead by accident? #canucks

You know it’s turned into a dud when the Canucks’ official Twitter account starts making fun of the team (it’s also a bit weird):

“@Lestat774 This is starting to look like the typical @VanCanucks and @PredsNHL game now…” http://t.co/Qz4kecDxhz

The Canucks lost 3-1 to the Predators and they are now 0-3 in the second half of back-to-backs.

Eddie Lack’s stats so far this season – not overly impressive. 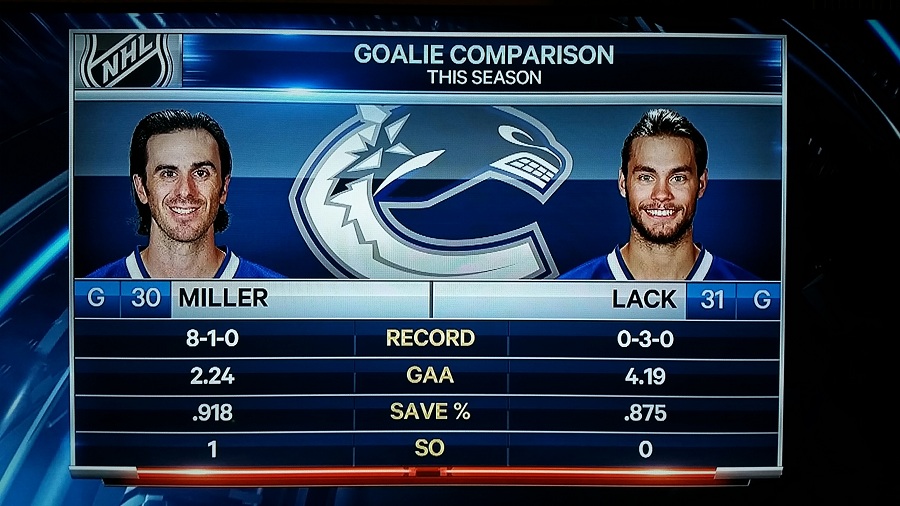 There’ve been some goals he’d like back – none more than Filip Forsberg’s second goal of the game (Nashville’s third) that beat him short side. But all three games he’s started have been the second half of back-to-backs and the team in front of him has looked tired.

Against Nashville, the Canucks only scored one goal. That’s not going to beat most teams, no matter how good your goalie is.

Kevin Bieksa left the game in the first period after being hit in the eye with a puck, leaving five defensemen to play the rest of the game.

I’m not a big fan of telling a player to wear a visor after he’s hurt, but I like this tweet.

Bieksa’s eye injury? The puck glanced up into his eye as he was at work in his own corner. There was no blood to be seen, but who knows when the eye is involved. All Canucks fans will sit and wait for a positive diagnosis in the next few days.

When you see a guy at the Canucks game wearing a Sbisa Jersey… #vcbcanucks pic.twitter.com/SmyEgQrwtl

Sbisa had a solid outing. In the first period, after Sbisa laid a solid hit on Taylor Beck, Shea Weber came in to defend his teammate’s honour (meaning knock Sbisa’s head off), and Sbisa didn’t turtle (like many sane people would).

Sbisa not backing down from Weber, yup cool points for that. #canucks

On the ensuing power play (Weber got an extra 2 minutes for jumping Sbisa) Edler scored.

I’m just sayin, but if it wasn’t for Sbisa, that wouldn’t have happened! #canucks

I guess she’s the one buying the Sbisa jersey.

Here it is (including my free advice):

Tons of well-priced barbers on Dunbar, Olli. Make the trip before you leave town.. pic.twitter.com/r84YP2F7mV

Mike’s response is gold, Jerry, and I mean roundteen gold.

@omarcanuck maybe they could keep a few strands and attach them where his eyebrows should be.. #WhatUpWithThat

5. What about the #FancyStats?

Having mentioned their one goal, it’s important to note that shots were not too far apart – 33-27 Preds – and Corsi for was even closer – 56-54 Preds.

The Canucks were competetive all game long.

Something strange has happened to Jannik Hansen since his promotion to the second line.

Against Edmonton, he had one shot on net and one blocked shot. Against Nashville, he had zero shot attempts. And he wasn’t horrible offensively. In the first period, he made a beautiful pass to Chris Higgins on a 2-on-1 and in the second he set up another glorious chance.

What’s off is that in the right mindframe, Hansen would’ve probably put both those pucks on net himself.

To me, all the talk of him admitting he changes his game when playing on the second line has gotten to him, and he’s now getting afraid to try anything himself.

See what happens when Jannik Hansen gets promoted. Starts trying to dangle d-men. No. No. No.

Maybe fans and media should let him play his game. He’s never been a prolific scorer, but he has filled in for the top-six in the past, and done a solid job of it.

Oh, if you’re wondering where the Tweet of the Game has gone, we’re starting a new era in our Tweet of the Game contest. As of tonight, everyone whose tweet is mentioned in our sixpack will be entered to win a $100 gift certificate to the Charles Bar, drawn once a month.

Yes, you can be entered multiple times, so get to work.