On a night that paid tribute to one of the all-time Vancouver Canuck greats, the current squad laid another egg and squandered an opportunity to create some distance between themselves and those looking in from outside of the playoff picture.

Be honest, when did you ever think you’d hear the words “highly anticipated” when describing a game against the Panthers?

With Roberto Luongo making his return to Roger’s Arena on Thursday, it was one of the most anticipated games of the season and while the first period definitely didn’t disappoint, the rest of the game was pretty depressing if you are a fan of the Canucks as they dropped a 3-1 decision to the Florida Panthers.

Even more depressing? Probably Ryan Miller who undoubtedly is feeling a little forgotten these days:

So if your throat is still sore from all of the Luuing you did today, why not grab a Vancity Buzz #Sixpack and moisten those vocal chords back up!

1. I Think There’s Something in My Eye. Excuse Me…

As expected, the Canucks honoured Luongo’s time in British Columbia with a video tribute during the first commercial break in the game action. Not surprisingly, it brought the feels in a big way:

Roberto Luongo salutes the crowd following his video tribute from the #Canucks. pic.twitter.com/P0OWQLU13p

Luongo’s reaction was pretty special as well, although that’s odd to say considering he didn’t even watch the video. Bobby Lu has always been an emotional guy and as a goalie, he needs to maintain his focus as much as possible during the course of a game. Which explains why he couldn’t watch the tribute or he would have gone full Mats Sundin.

QUICKLY NOW SCORE ON HIM WHILE HE'S CRYING

It was a fantastic moment for Roberto Luongo, the Canucks, and the fans for a few different reasons. Obviously, it was great for Luongo who received the recognition he so badly deserved during his time in Vancouver. It was great for the Canucks organization as they took full advantage of the opportunity to honour a gigantic part of their history and hopefully buried the hatchet in the process. And finally, it was a great moment for the fans who hopefully have some degree of closure for one of the most polarizing player-fan relationships in Vancouver Canuck history.

Stirring, chilling, standing ovation for Lu. As loud as the place has been all season. And as it should be.

2. I Think There’s Something in my Eye. Excuse Me – Part Two

Based purely on the feedback received on Twitter, that was the worst game of the season for the Canucks. or at the least most disappointing

There were three things that almost made me cry watching this game:

1. Roberto Luongo owned the Canucks and finally completed his victory lap over the entire league as Vancouver was the only team he had never defeated.

I wonder if any cap geeks out there can figure out how much the #Canucks are paying Luongo to beat us tonight…. #vcbcanucks

2. The power play was a complete embarrassment tonight. The Canucks were down 3-1 early in the third period and received 5-on-3 man advantage for 40 seconds after Alex Edler took a Dave Bolland high-stick to the face. The Canucks did not even register a shot.

3. Tonight was a wasted opportunity because as I mentioned in the Game Day Report, the Canucks need to be taking advantage of their games in hand. San Jose, Dallas, Minnesota, Winnipeg and Los Angeles all lost tonight meaning this was the perfect opportunity to pick up some much needed leverage in the Western Conference. This was truly a squandered opportunity.

3. The Kids Are Alright 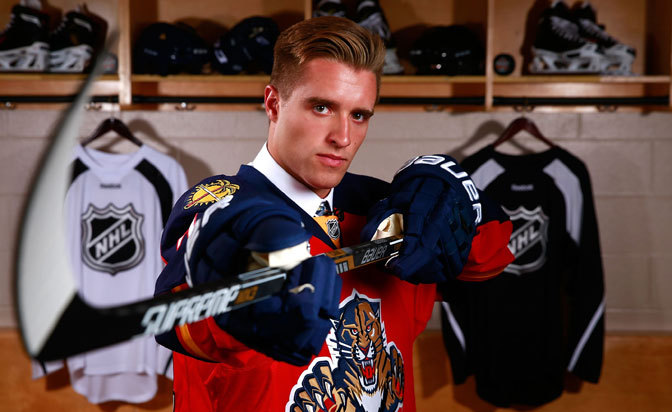 It appears that after years of high draft picks and barely a sniff at the playoffs over the past 15 years, the Florida Panthers may have finally found a way to properly develop their young players.

Led by Jonathan Huberdeau with two goals and an assist, the kids carried the offensive load for the Panthers against the Canucks with their speed and causing all sorts of problems for the good guys.

Aaron Ekblad continued his (Florida Panthers) record breaking season by adding another assist to his already impressive point total. He has already passed Ed Jovanovski for most points recorded by a rookie defenceman. And this is only in half of a season.

While the intermission Sportsnet panel inevitably debated which goalie should be considered the best in Vancouver Canuck history (hint: It’s Roberto Luongo), Rich Sutter dropped a bomb by going all in on former Canuck goalie Richard Brodeur:

Sutter was debating with John Shannon who vehemently believes that “King” Brodeur should be considered the best goaltender in Canucks history due to the fact he carried a below .500 team through three rounds of playoff hockey during the early 1980s when defence hadn’t been invented yet (Damn you, Jaques Lemaire…). Although he does have a point, Rich Sutter took exception by attacking Brodeur instead of simply arguing the merits of the other two candidates.

It was an odd segment but very interesting nonetheless. I don’t think many people have heard anything negative about Richard Brodeur until now. Only about his stellar playoff performance before being ventilated (and rightfully so) by the powerhouse New York Islanders of the 1980s. It’s always interesting to hear how tension can arise in any team environment. Unfortunately, those stories are few and far between because of the team first mentally that’s ingrained in most hockey players. If you have a problem, it stays in the locker room.

I have to admit, the Luuing was a really nice touch to start the game. It was great to know that Roberto Luongo won’t be soon forgotten at Rogers Arena and for one last time, the majority of the fan base was behind him and hoping for a god performance.

Except it got a little bit old once Luongo started to school the Canucks.

There was still a game to be played and I’m sure the current Canucks were probably a little confused as to why the fans were still encouraging the goaltender that their team was trying to score on.

Just to reiterate what I said earlier, Luongo will always be a huge part of the history of this franchise. But the first period tribute and courtesy Luu’s should have provided enough closure for everyone to move on and start supporting the Canucks that actually want to be here.

6. Here’s a Depressing Fact for Everyone

The last time the Florida #Panthers won in regulation in Vancouver was, March 7th, 1994. Horvat, Ekblad and Barkov weren't born yet.

If there is one thing I truly hate, it’s long-term streaks being snapped. This is pretty much the same feeling I had when the Canucks finally lost to the Leafs last season.

Good Night everyone. I need a beverage…