For Eddie Lack, revenge was a dish best served on ice.

Ouch, let me try that again.

The important thing is the Canucks took a two goal lead against the Islanders into the third period and this time they held on for the 3-2 win. (rather than letting in seven like last time around).

Islanders fans in the Arena were not impressed.

I’m guessing the long faces are in reaction to seeing how ridiculous they look on the jumbotron.

Kevin Bieksa will probably be a force for the Canucks when the playoffs come around because he’ll be focused and alert. Unfortunately, Vancouver’s not halfway through their season yet, so he’s prone to the kind of brain cramps only Bieksa can have.

During the first period Bieksa was marking Matt Martin in front of his own net, and as the pass came from Travis Hamonic, all #3 had to do was take Martin’s stick.

Remember when they taught you to take the player in front of the net's stick, Bieksa? Like the first time you ever played hockey?? #Canucks

But Bieksa didn’t remember… and Martin tipped in the puck.

During the second period, Bieksa made up for it by setting up Nick Bonino.

Good Bieksa was back. For a few minutes.

Unfortunately Casual Kev returned for a shift in the third. With two chances to clear the puck, he screwed up both, leading directly to Mikhail Grabovski’s goal.

"It's okay Kevin, I'll be back soon." pic.twitter.com/z38gdLuFJ9

The Sedins have been somewhat ineffective lately, especially at even strength. While they have a couple of good shifts a game, there haven’t been many games where they’ve dominated opponents with their cycle like they were doing early this season.

So finally, Alex Burrows was reunited with his old friends.

Why did it take so long? No idea. You’d hope Desjardins would be ahead of casual fans on his line changes, but this one was a long time coming.

What Willie Desjardins was saying:

“I think his history is what influences me, more than anything. He’s played there in the past and I think he just gives us a different look.”

Not the fact he’s been one of the most consistent Canuck forwards this year at creating chances in the offensive end?

Not the fact he’s made players around him better all year?

Not the fact he’s having a renaissance year, proving last year was an injury-filled anomaly, and could thus fill his old role alongside the Sedins like he used to?

Henrik Sedin was excited about it. His comments on the last time they played with Burrows:

“It was a while ago… I don’t think we’ve had more than a few shifts here and there the last two years. It should be fun.”

Burrows with with the Sedins was no more potent than the top line has been with Vrbata lately. Still, Burr fit into the cycle well, and they did have a few exciting chances.

Stick with it, coach – there’s some magic left in this line.

Still, he wanted this one.

"It's the biggest game I wanted back last year, feels good to get another shot." @Eddielack → http://t.co/WiE8XhWKQA pic.twitter.com/yr801e8Wtb

He got the win. His stats: two goals allowed and a .913 save percentage.

And now I present our resident mathematician Ryan Biech.

Those numbers for Eddie are great – given that he was getting all the crappy starts at the beginning of the season. #Canucks

As long as Zack Kassian’s in the lineup (and not traded to another team) I’ll have to reserve an s-pack spot for him.

If he has a bad game, he’ll be scratched, and if he has a good game, coaches/management will say “show me more.”

Against the Islanders, he had a good game. He was physical, he used his size and he even helped set up a goal. You’ll see it on the replay 30 seconds into this.

KASSIAN WITH A SHOT ON GOAL!! Get him on the top line!! * Quoting Kassian lovers * #Canucks #vcbcanucks

You'd think Desjardins and Benning would see the lovely passes from Kass and put him with some finishers, though? #Canucks

Fine. But so does Wagner.

@ADanielWagner Put him with Bonino, please.

Some more tweets about the man-beast.

Ok who are you #9 and what have u done with Zack Kassian! #Canucks

Another sweet dish from kass…. #Canucks

What did Desjardins think of Kassian’s play?

Willie on if Kass' physical play made him happy:I dont know,when Zack plays hard he's good.I dont think that's a word that would describe it

Kassian was great. Thing is, Linden Vey, who played for late-scratch Radim Vrbata (illness), also had a great game. Neither Vey nor Kassian should be scratched next game based on their their performances against the Isles.

Actually, libraries are louder than Vancouver’s hockey arena these days with all the people typing away on their laptops.

Maybe I should give the fans a break though. We all know Tuesday’s game was a speed bump on the way to this week’s main event (see number 6 for more on that).

The idiots who applaud at the end of movies are louder than this crowd.

With the Canucks up 2-1 in the second period, someone started the wave.

Tell him to shut up. RT @_Twurtle: The guy beside me is starting the wave it's going down #canucks

A wave with a one-goal lead. What have we come to, Vancouver? Are we Hurricanes fans now? 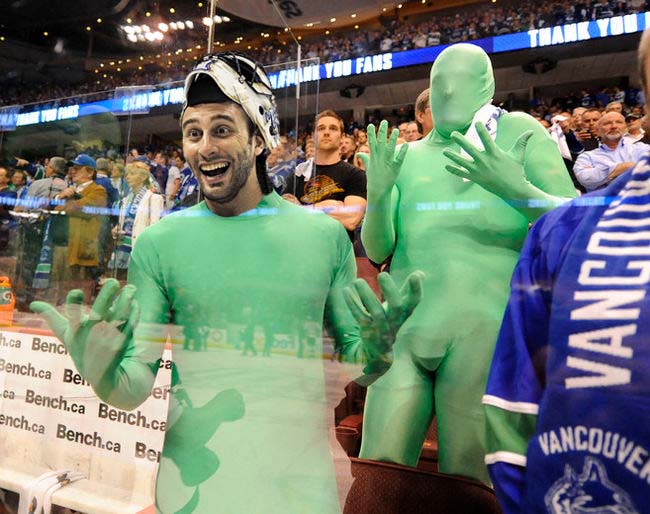 A month ago, I was tweeting about how if Luongo had got to play in the Heritage Classic, he’d probably still be a Canuck. Some disagreed with me.

@_EllieNuck_ I don't think that trade would've happened without the Heritage Classic snub.

At his media availability after practice Tuesday, Luongo was asked if things would’ve been different had he got that start. His reply.

“That goes without saying, and if I would have played I probably would maybe still be here. Who knows?”

Some are calling it a “troll-job” by Lu, and something he snuck into the end of his media availability. It wasn’t. Luongo was asked in the middle of the presser if getting that start would’ve made a difference, and he answered it honestly without a hint of sarcasm or a smile.

Makes sense – right after the game, Luongo had his agent Pat Brisson call Mike Gillis to demand a trade. Gillis gave Brisson the green light to shop Luongo, and Florida bit. You know the rest of the story.

But before you get too upset Canucks fans, Lu said he’s moved on. He said his only regret from his time in Vancouver is that he never brought the city a Stanley Cup.

We feel the same, Roberto.