After losing 5-3 to Detroit on Sunday, the Canucks needed a strong start against the Capitals.

Vancouver got the start they wanted, playing a dominant first period and grabbing a one-goal lead. Then they let Washington up off the mat.

The Canucks never trailed in the game, but the Capitals were better in the second and third.

Lucky for Vancouver, Daniel Sedin and the power play showed up, leading them to a 4-3 win over Washington.

Here are the shot attempts by both teams from war-on-ice.com. 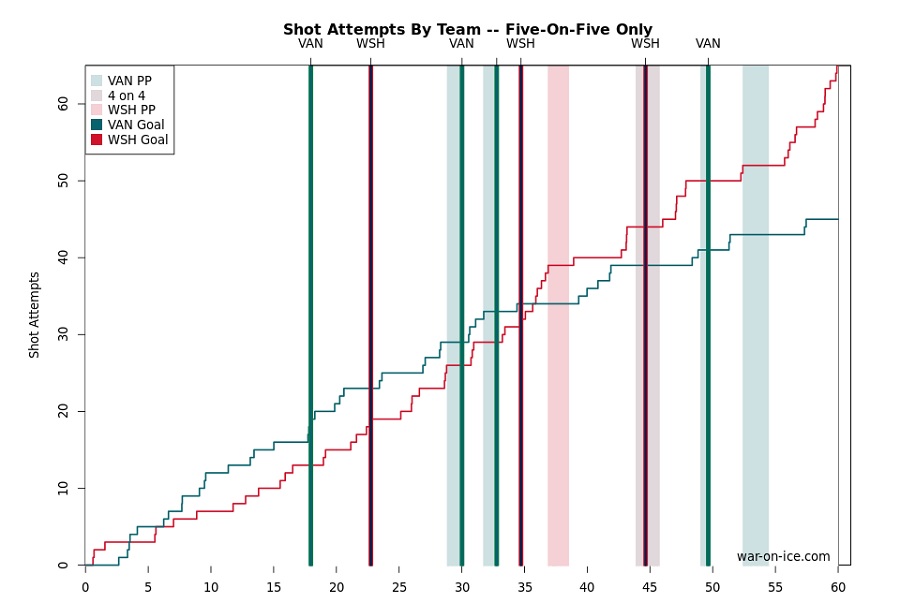 You can see the Canucks were great in the first 20 minutes. Even strength corsi for was 21-15 for Vancouver after one.

After that the Capitals steadily took over. Corsi for in the second was 25-15 Washington, and in the third 17-9 Washington.

2. Lucky for the power play

While the Canucks power play hasn’t exactly been firing on all cylinders this season – it’s still ranked 17th in the league – it has now struck three times in their last 2 games. Yep, it’s hot like Jennifer Lawrence.

Extended Power Play work for @VanCanucks during morning skate in WSH.They’ve scored a PPG in 2 of the last 10 games (both being on the road)

Remember when Ryan Kesler had to lobby for practice last season? Not that it anyone disagreed with his assertion that practice would help (except Torts, I guess), but he was right.

Daniel scored both power-play goals for the Canucks. Here’s the first.

Let’s for a second take for granted how awesome Daniel and Henrik are, and give someone else some credit.

Linden Vey… After Radim Vrbata takes the slapper, he retrieves the puck and plays it behind the net. Vey goes for the pass but at the last second, lifts his own stick, allowing the puck to get to Henrik.

It was a brilliant play that allowed Hank to tap the puck to Daniel for the quick shot, on which he scored.

Halfway through the third period, Daniel scored his second power play goal of the game.

3. Daniel’s reaction to his slapper

Sportsnet’s Dan Murphy asked Daniel about the slap shot after the game.

Correction – it’s been a while since Daniel scored on a slapper. He’s been taking slap shots quite regularly since the start of the season.

Daniel on winning goal: “The puck was rolling. I closed my eyes and I shot it.” #Canucks

Remember the last time a Sedin made a bone-head play in his own end? Me neither.

Henrik made a big mistake against the Capitals, though. With the teams playing 4-on-4 and about 15 minutes left in the third period, Hank decided to try a no-look pass to Sbisa. It’s right at the start of this clip.

Hank’s play caused the Canucks to be stuck in their own end, leading to Washington’s tying goal just seconds later.

The pass also adds considerable doubt to the theory that Henrik has eyes in the back of his head. That’s all it is, though – doubt. I could show you thousands of passes that would prove he does have them.

With Canada’s World Junior camp invitees being named on Monday, a debate began over whether Bo Horvat should play in the tournament or stay with the Canucks.

Against the Capitals Tuesday, Horvat was the only centre out of Vancouver’s four to have a winning record in the faceoff circle at 5-2. (Hank 7-12, Bonino 10-12, Richardson 5-5).

He also made a beautiful pass to Derek Dorsett for his first period goal, leading to this from Mike.

Attention Team Canada,, you will not be Getting Bo Horvat for the World JR’s this year.. Under ANY CIRCUMSTANCES!! #vcbcanucks

But think about this: when Zack Kassian’s broken finger is healed in a couple of weeks the Canucks will yet again have 13 forwards and be facing the choice of scratching Vey or Horvat (or maybe Kassian) on a night-to-night basis.

Vey’s been great on the power play (so you need him), and Kassian will need to play to get back into form, so sending Horvat off to play for Team Canada might not be such a horrible idea.

Still not willing to let him go?

OK, what if he teaches Vey to take faceoffs before leaving?

After October, we decided to change our “Tweet of the game” contest. Instead of awarding one $10 gift card every game, we switched to one $100 gift card per month.

To enter the draw for December, you just have to have your tweet mentioned in the Sixpack (if you use #VCBCanucks your tweets are easier to find).

We did a random draw during the game, and here’s November’s winner:

Congratulations Mr. Jayman – you’ve won a $100 gift card to use at the Charles Bar or any Blueprint location.

Use it wisely my friend.

(meaning save me a beer)