Calgary and Vancouver have met three times in the playoffs. Each time, the series has gone to overtime of Game 7.

So you can understand why fans and ex players would be jacked up for this matchup.

But seriously tho, this actually happened!! #vcbcanucks #Canucks #Steamer pic.twitter.com/YIfkn3t6Yd

Earlier in the day, Canucks coach Willie Desjardins said the easiest game to steal is Game 1 for the away team.

With minutes remaining in the third, the teams were deadlocked at 1-1 and they looked as if they’d continue the overtime tradition for the series opener. Then Ronald Kenins and Jannik Hansen collided at their own blue line, forgetting to clear the puck and leading to Kris Russel’s winner with 30 seconds left.

Shots were 30-30, even-strength Corsi-for numbers (meaning all shots, including those that didn’t get to the net) were 51-51, and the Flames squeaked out the win with 30 seconds remaining.

The Canucks lost Game 1 by a 2-1 score. The battle is officially on.

1. What a goaltending matchup

Both goalies were on fire.

When Radim Vrbata and Daniel Sedin each have six shots on net and neither score, you know the opposing goalie (Jonas Hiller) is playing well.

At the other end, Eddie Lack played so well he had everyone in Rogers Arena chanting his name every time he made a save.

After Kenins and Horvat collided late in the third, the Canucks were pinned in their end. Luca Sbisa and Kevin Bieksa were stuck on the ice, and they didn’t even come close to retreiving the puck to relieve the pressure.

On the Flames’ winning goal, Lack couldn’t find the puck through the screen and he barely reacted to Russel’s shot.

It was a bad sequence with bad timing, and it’s what cost Vancouver the game.

If Vancouver’s going to do well in this series, they’re going to need the following three players to step up: Bo Horvat, Jannik Hansen, and Ronald Kenins.

All season long the Canucks’ fourth line has provided energy whenever the team needed it. They’ve been the ones to pull the team out of lulls by throwing big hits and driving the puck to the net.

When you watch it here, you’ll see it was pure determination by him and his linemates that forced this puck in the net.

Bovat was a happy man.

Vancouver was the better team early on, outshooting Calgary 13-10 in the first period.

Jannik Hansen was flying at such a pace that as he danced up the boards on one play, CBC commentator Jim Hughson called him “the Artful Dodger” as he pulled away from his check.

Which led to the birth of his new name…

Here’s a chart from war-on-ice.com showing the top Canucks performers from the game. 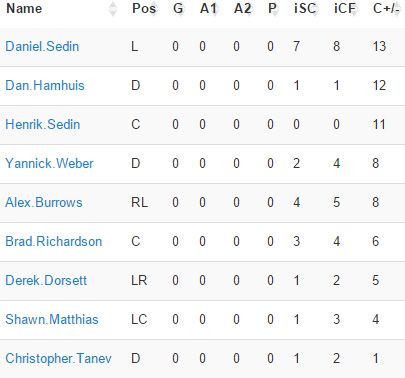 From three minutes into the game, the Sedins were putting on a show, passing back and forth and looking unstoppable. It looked as if they might put up four points each by the end of the night.

They didn’t, but you can see from the stats above (focus on the Corsi +/- column), they were all over the Flames all game long.

Strangely enough, so was Dan Hamhuis, who’s had a bit of a shaky season. He had a good game too, making a bunch of calm, smart defensive plays, and jumping into the play and having some of Vancouver’s best scoring chances on the night.

The ever so clueless Sportsnet displayed this “live” shot of downtown Vancouver during the first period.

Holy shit it suddenly got dark in Vancouver. pic.twitter.com/8bUD50KfKb

It’s been easy to be critical of the fan experience at Rogers Arena this year. Canucks fans did the wave at ridiculous times (during the third period of close games), they sat on their hands instead of cheering, and the team had its announcer telling fans when power plays started.

One thing the team thankfully did not do was hand out signs like these.

I thought they were good hockey fans down in Nashville?

The game ended with Vancouver tied with Calgary in shots and with the Flames scoring one more goal just before it ended. This was with the Canucks playing a sleepy second period where they were outshot 10-4.

Just imagine if they kept up the pressure they started the game with through the second and third periods. It would’ve been a walk.

Fans will be upset they didn’t do that, but as we’ve witnessed all season, the Canucks play better when the pressure’s on. Down 1-0 in their first round series – they’ll be feeling the pressure now.

Cool, so Canucks in 5. It’ll be better winning at home #vcbcanucks

Will the Vancouver Canucks rebound from a Game 1 loss to win the series? in Vancity Buzz Polls on LockerDome