On Wednesday Scott Rintoul of TSN 1040 asked Chris Higgins if he’s turned the page on last year’s games against the California teams. His answer was surprising because it wasn’t the typical “fresh slate” response.

Higgins said the Canucks remember those games because they played so poorly in them.

Judging from Thursday’s game against the Sharks, not only did they not forget those games, they didn’t forget to play the exact same way.

What I’m trying to say is the Canucks were bad against San Jose Thursday.

But somehow the Canucks won 3-2. Read on to see how.

1. Miller could do this in his sleep

While the team may not have changed how it performs in California, Jim Benning’s biggest aquisition of the summer changed the game’s outcome.

Once again, the most amazing part about a stellar Ryan Miller game was how UN-amazing it looked. Like an accountant punching numbers into a calculator, Miller stands in front of the net and stops pucks. He goes to work and does his job like it’s the easiest thing in the world.

There was a scare right at the end, though – with San Jose’s goalie pulled, the Sharks scored the game tying goal… just after the buzzer went to end the game.

Miller: “It hit somebody in front and went across, and they were able to get a stick on it (pause) so somebody’s on our side.” (because it went in after the buzzer, he meant)

You’re damn right somebody’s on your side, Ryan.

Nick Bonino has been on fire lately. After that shortside roof job last game if anyone was wondering if he’s just getting lucky, or he’s really that skilled a sniper, he pulled this off to get the Canucks the 3-2 lead:

What you can’t see from that angle is how close Bonino placed that shot to the left post. It was just another dirty sniper goal from the guy sporting this new dirty stache. 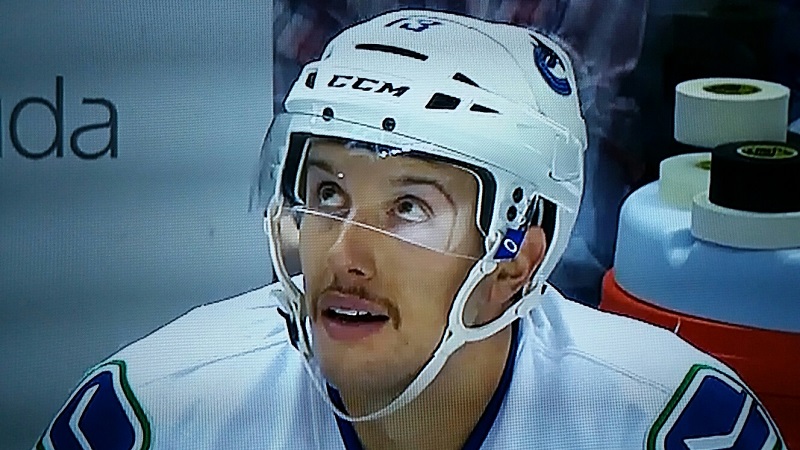 And if we were still doing only one Tweet of the Game, Bonino might’ve won it himself here (which would obviously have been his biggest achievement of the night).

@VanCanucks thanks to my own teams Twitter account for that pic of my sick flow. Not sure what I did to piss off whoever runs it right now!

Soon after that Bonino goal, Raffi (yes, that Raffi) created this hashtag:

yo @strombo dude, #Canucks lead Sharks 3-2. could get used to this!! #Boninophone

PITB made it even bigger.

Best hashtag RT @Raffi_RC: yo @strombo dude, #Canucks lead Sharks 3-2. could get used to this!! #Boninophone

And of course Wyatt had to add his own twist.

And… back to hockey!

Just before the game, we found out Zack Kassian wouldn’t be playing because he had a lower body injury (doesn’t sound like anything serious) from the Colorado game. Because of this, Bo Horvat got to play.

He ended up with only 7:18 of ice time by the end of the game. Funny thing is he was noticeable – and not noticeable in a way that makes you say “WTF ARE YOU DOING?? GET OFF THE ICE” (like we’ve been saying with Luca Sbisa most of the season) – noticeable like “whoaaaa dude, that was sickkk.”

Horvat winning a lot of his battles already makes him one of the better 4th liners in years.

At one point in the game, Horvat even snowed Antti Niemi when he was covering the puck. That’s a pretty gutsy play – you know the cavalry’s coming to get you when you pull that stunt. His teammate liked it:

Canucks players live tweeting from the bullpen #vcbcanucks “@TomSestito23: Bo just spraying the goalie like the boss he is #Beauty”

If you didn’t hear the news during the day on Thursday, NHL COO John Collins said that “jersey sponsorship is both ‘coming and happening.'”

This had NHL fans on twitter up in arms as they pictured those gaudy European jerseys that look more like grandma’s patchwork quilts than hockey jerseys.

I liked this take though.

The idea is getting a lot of negativity, but I think jersey ads could be a lot of fun: pic.twitter.com/3xzTWwxck5

My favorite exchange happens with the ref at the 1:50 mark:

Ref: “Oh really? We’ve already gone over that, didn’t we?”

Ref: “I like him, it’s you two I don’t like.” (referring to Kass and the Nashville player next to him)

K, that’s it for tonight. Remember, if your tweet was mentioned in this post you’re entered into a draw for a $100 gift certificate to the Charles Bar or any Blueprint location. Good work.