The Canucks desperately needed a win to solidify their bid to make the post-season and thanks to the heroics of Eddie Lack, Vancouver defeated the Los Angeles Kings 2-1 in a shootout.

It’s been a long time since I’ve felt this nervous about a hockey game. Actually, it’s probably been a good four years, but I’m not going to get into that right now.

Anyways, tonight’s match with the LA Kings was gigantic in terms of playoff positioning. With a win, the Canucks basically punch their ticket to the post-season. Lose, and all of a sudden things don’t look so fantastic with the final two games against Arizona and Edmonton suddenly becoming that much more significant.

Thankfully, the Coyotes and Oilers are two of the worst teams in the league and the Canucks should surely be able to handle that right?

Fortunately, it may be a moot point now as the Canucks prevailed over the Kings and moved to 97 points on the season.

I’m definitely celebrating with a SixPack.

There is no other way to describe the Canucks’ victory over the Kings tonight.

Also, it was nerve-racking from start to finish:

Wow, I literally almost blacked out in that last 30 seconds. Too much stress. #VCBCanucks 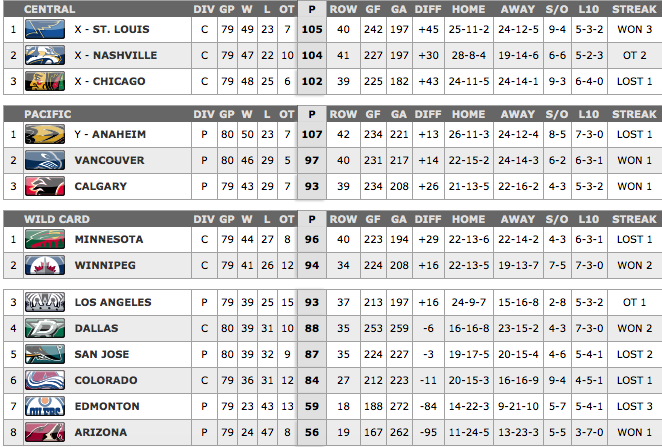 The victory puts the Canucks up four points on both the Calgary Flames and Kings, although both teams have a game in hand. That game, however, will be played against each other which means Vancouver is in even better shape to make the playoffs.

But as nice as the security is, the goal now should be to lock down second place in the division to secure home ice advantage in the first round.

2. They Still Got It

As big as the win was for the Vancouver Canucks, the biggest story of the game could easily be how dominant Henrik and Daniel Sedin were from start to finish.

Sedins wearing these mofos down.

And remember, this is against the Big Bad LA Kings who have made a hobby out of neutralizing the twins and making them as ineffective as Linden Vey (more on that in a moment).

After trailing the Kings for 50 minutes and the outcome of the game looking grim, the Sedins decided to put on a show for the Vancouver faithful:

Not only was this goal a throwback to the Sedins of old, but it was also Henrik’s 700th career assist. And it couldn’t have come at a better time.

Man, the Sedins were fluent in dolphin in that play. How would Henrik know Daniel was there?

If you don't like watching the Sedins, then you've got a significant character deficiency

And how did that play even develop?

Daniel on if he knew Henrik was going to pass it to him – "I had a feeling." #Canucks #twins

Should we even be surprised?

As wonderful as the outcome was for the Canucks, there are still a few areas of concern for Vancouver that Willie Desjardins should probably try to address over the final two games of the season.

Horvat goes 5-for-7 in circle, has two good scoring chances. Willie D needs to think about some PP time — to at least win faceoffs. #Canucks

lol… #Canucks with a too many men penalty… go figure…

For god sakes learn to count. It's not hard. Five skaters. Five. You morons.

Face-offs and too many mens = the #Canucks Achilles heels.

My suggestion is to hire someone other than Chris Tanev to pump the team up before games. These brutal starts have got to stop.

Like Corey Hirsh said on the Sportsnet broadcast, they are letting teams dictate the play and when you get into the playoffs, the game might be over by the time the Canucks figure it out.

The early story of the game was Sven Baertschi receiving the scratch in favour of Ronalds Kenins.

Kenins in, Baertschi out, as expected #Canucks

It was an interesting turn of events for Kenins as it seemed like he had become Willie’s scapegoat and easy answer if he did have to scratch a player. But realistically, it made a lot of sense because the Kings are a hard-hitting team and you need someone who is willing to hit them back.

Not to suggest that Baertschi couldn’t hold his own, but Kenins has proven he will take on the biggest and meanest that the NHL has to offer.

Kenins did have himself a productive game, just missing an opportunity to tie the game in the second period.

But as the Canucks were struggling to tie the game in the third period, I couldn’t help thinking that Baertschi might be more useful in this situation as Kenins has had some issues putting the puck in the net recently.

If only there was a solution that would see both Sven Baertschi AND Ronalds Kenins in the line-up.

Should this even be a question anymore?

No shot attempts for any of Matthias-Vey-Dorsett through 2 periods. Be interesting to see how much they play in 3rd #Canucks

This isn’t to say everything hinges on Linden Vey, but Shawn Matthias has disappeared since being relegated to a line with Vey and Dorsett. Individually, Matthias, Vey and Dorsett are very useful players. But as a unit, they are not getting the job done.

So what can be done?

I would have left baertschi in swapped vey for Kenins n put matthias at Centre.

With the playoffs all but assured and only two games left against Arizona and Edmonton, why not give Baertschi-Matthias-Dorsett a chance?

For the first time ever, most Canuck fans were actually hoping to see the Canucks make it to the shootout.

I wanna see me some #lackdance.. Get this shootout boys! #Canucks #vcbcanucks

It’s a odd feeling that is only present because Vancouver has two aces up their sleeves in Radim Vrbata and Nick Bonino.

But what happens when both aces are stymied?

Full credit goes to Chris Higgins for scoring the lone goal, but Lack is the hero of the night.

But he’s always the hero to this lady:

I would pay to see Mama Lack, the Horvats and the Shinkaruks watch a game together.