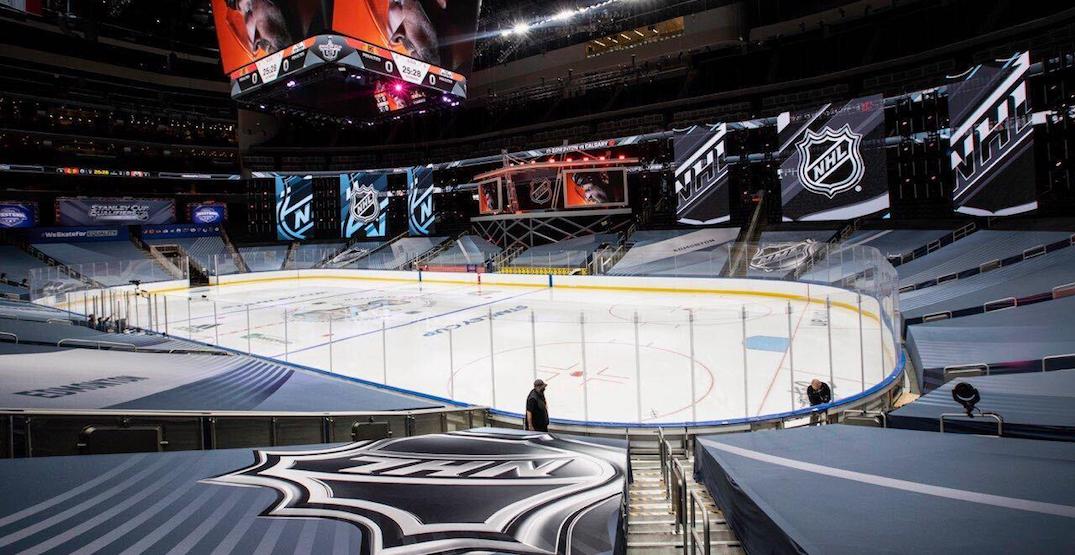 There won’t be any fans in the stands but the show must go on when the NHL begins playing games that matter this weekend.

The hub city setup looks impressive, as Rogers Place in Edmonton and Scotiabank Arena in Toronto have been given made-for-TV makeovers. Empty seats have been covered with banners, while a number of digital displays have been set up for an impressive backdrop for television broadcasts.

Those broadcasts will have 32 different camera angles at their disposal, 12 more than a hockey game during normal times.

So the arenas won’t feel empty, and they won’t sound empty either. EA Sports, the Burnaby video game maker that produces the popular NHL series of games, is supplying the league with fake crowd noise to avoid awkward silences.

Players should still be more audible than usual though, which is why the league is instituting a five-second delay to bleep some of the colourful language known to be spoken in hockey arenas.

All 24 participating teams have provided the NHL with digital content, which will be used at the league’s discretion during the playoffs.

A Canucks spokesperson told Daily Hive that the team has supplied the NHL with fan chants previously recorded on Zoom, “go Canucks go” chants from in-arena recordings this season, and that “Whooo!” recording you always hear after goals are announced at Rogers Arena.

The team has also supplied the NHL with various announcements from Canucks PA announcer Al Murdoch, including the team welcome (ie. “welcome your Vancouver Canucks!”) and the last minute of play in each period.

As far as music goes, the Canucks’ intro song, goal song (“Ain’t talkin’ ’bout love” by Van Halen), and victory song (“I’m still standing,” by Elton John) have been supplied to the NHL, as have popular in-arena sing alongs like Sweet Caroline and Take on me, as well as walk in songs for each period.

Even the team warm-up mix, as selected by Canucks players, has been submitted.

The Canucks aren’t exactly sure how these assets will be used yet by the NHL, which is understandable given this has never been done before.

Perhaps in addition to last line change, the “home” team can get full control of the DJ booth? Maybe hearing their home PA announcer will give Canucks players an extra boost of energy against Minnesota in Games 1, 2, and 5?

The Canucks say they’re also producing a “pre-game countdown show,” that will run on Canucks social media platforms leading up to the start of each game. This will be similar to what the team usually does before games at Rogers Arena to hype up fans for the game, and will include a produced playoff video.

Even team mascot Fin will be incorporated into the digital show somehow.

The pre-game siren will also be in use, with a “deserving healthcare worker” cranking it before each game, as part of the pre-game show.

CRANK IT UP BURR!!! 🎉 pic.twitter.com/LL0jwoaJWv

We should get our first sense at how everything will look and sound today, when exhibition games begin. The Philadelphia Flyers and Pittsburgh Penguins will be the first teams on the ice in Toronto, beginning at 1 pm PT. The Canucks play their lone exhibition game tomorrow against the Winnipeg Jets at 7:30 pm PT, from Edmonton.

Game 1 of the Canucks vs Minnesota Wild Stanley Cup qualifying round series is on Sunday at 7:30 pm PT.