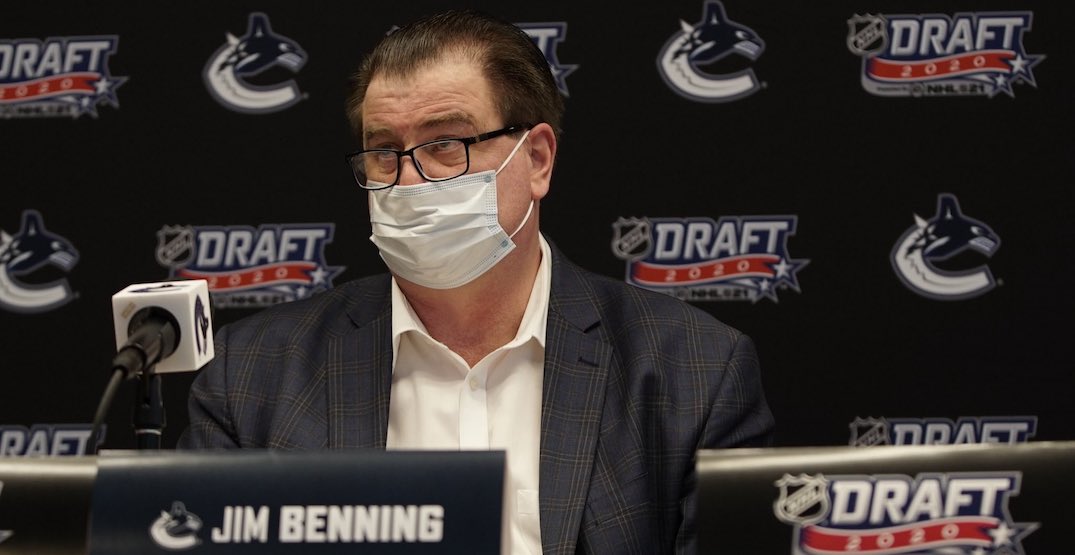 Without a pick in the first two rounds, the 2020 NHL Draft took a while to get going for the Vancouver Canucks.

GM Jim Benning had to wait until the third round to make his first pick, adding three defencemen, one winger, and one centre on Wednesday. The draft was held virtually for the first time ever, with Canucks management setting up a “war room” in Vancouver.

A look inside the #Canucks room on Day ✌️ of the #NHLDraft. pic.twitter.com/w0yWvAbxEs

Without a director of amateur scouting since Judd Brackett left for the Minnesota Wild, Todd Harvey was left to run the scouting staff for the Canucks.

Here’s a look at who they added to their prospect pool.

"He had an awesome year last season…"

Elite Prospects’ scouting report describes Jurmo as a smooth skater and “one of the best puck-rushers in the Finnish U20 league” last season. Jurmo has made the move to pro hockey this season, playing in the Liiga in Finland. He had 28 points in 43 games last season with Jokerit’s U20 team.

Congrats to @jacksonkunz9 on getting drafted to the Nucks #gosioux

The Canucks grab Jackson Kunz at #113. One of the youngest players in the class. 6'3 forward who played centre and wing in high-school prep circuit. Off to NoDak.

Not a great skater.

Kunz has size, but skating is a weakness for him, according to Elite Prospects Director of Film Scouting Cam Robinson.

A native of Grand Forks, Kunz is committed to the University of North Dakota.

According to the panel, Truscott could be an Alex Edler type defenceman and his favourite player? Quinn Hughes. 🙌#CanucksDraft | @ToyotaPacific pic.twitter.com/mURJCp3NpG

The Canucks added a second defenceman in the fifth round, snagging Michigan-born blueliner Jacob Truscott from the US National Team Development Program.

Truscott scored 21 points in 47 games with the USA’s U18 team, and added 11 points in 19 USHL games. Committed to playing NCAA hockey with the University of Michigan, Truscott is a “technically skilled passer who can thread the needle in all three zones,” according to Elite Prospects’ scouting report.

“You really want this guy on your team. He’s really smart, understands all these situations in the game, knows how to play with good players.”#CanucksDraft | @ToyotaPacific pic.twitter.com/7uZKXwRSXO

Vancouver looked to Russia for their sixth-round selection, snagging centre Dmitry Zlodeyev 175th overall. Zlodeyev had 28 points in 42 MHL games and is splitting time between the MHL (5 points in 7 games) and VHL (3 points in 5 games) this season.

Import pick D Viktor Persson has been drafted in the 7th round, 191st overall by the @Canucks!
Congrats Vik! 🔥🔥🔥
📸 @nnathalieemma pic.twitter.com/a5wG2gOPKf

The Canucks used their last pick on Swedish defenceman Viktor Persson, who will join the Kamloops Blazers of the WHL for the upcoming season.

An offensive defenceman, Persson had 18 points in 26 games with Brynas’ U20 team last season.