Considering they’re playing without their captain and first line centre, the Canucks are doing well.

Vancouver got a point and Sunday’s game was fun to watch.

Hopefully Canucks fans enjoyed the four-goal outburst Sunday, because games like this won’t come around too often.

Unfortunately Florida won 5-4, in a shootout.

Now, before you yell “Miller lost in a shootout?!” at your smartphone or laptop, he didn’t – he was injured after taking the first shot. Yes, now you can yell.

But don’t freak out too much.

Let’s start with this.

With Henrik out, Daniel Sedin didn’t hesitate to fill the void. The cool thing is he’s still playing his own role too.

Wondering how that’s possible when Hank’s normally the passer and Daniel’s the finisher?

Check out this 2-on-1 goal with Jannik Hansen.

Daniel’s first pass – a laser under Gudbranson’s stick – was worth an assist. His finish was worth a goal.

So yeah, he deserved a goal and an assist on it, and now you see how he’s filling the Hank void.

You may not believe this, but the Canucks have somehow managed to show up two games in a row.

They didn’t outplay the Panthers, but they kept up with a young, fast team, and they were in the game the entire time.

You can see that from the possession chart (from hockeystats.ca) 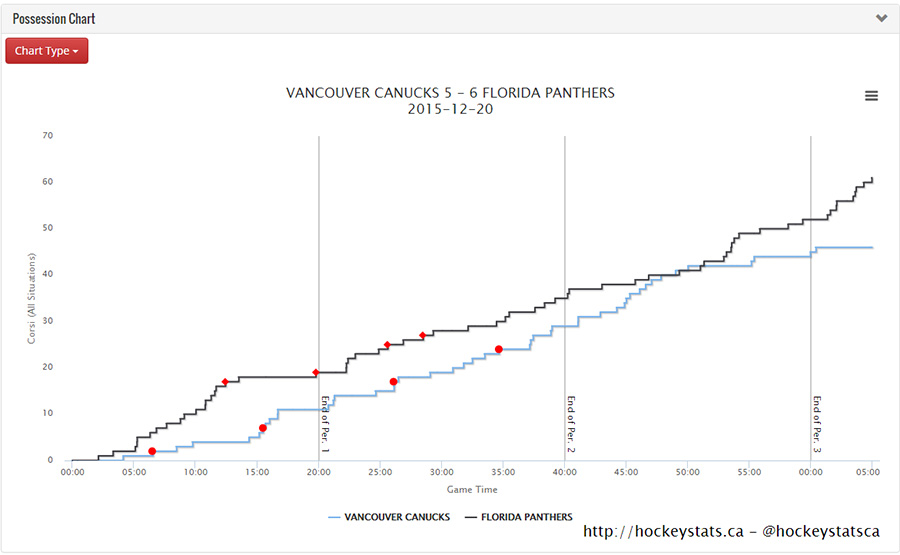 More on how Vancouver looked in OT:

Truly remarkable how bad the Canucks are at 3-on-3

How are the Canucks SO bad at this?

Canucks hiding their tanking intentions at first, but in OT they tried their best to do it. pic.twitter.com/kmScYSNB6B

Before going on, let’s give Willie credit for two things:

a) the Canucks looked better defensively in OT. They came back quickly and formed a tight triangle, keeping Florida on the outside.

All three of those pairs have had chemistry during 5-on-5, and McCann and Hansen need to be anchoring their own OT lines now. Now if we could stop him from starting Bartkowski in OT…

Some of you might remember I bumped into the Horvats at a game in Chicago last year.

There, his dad Tim told me they often make it to their son’s games around Detroit, Buffalo and Ontario.

Horvat looked like he had downed five red bulls before Friday’s game against Detroit, so I thought the family must be providing that extra spark.

@omarcanuck yeah they were, I met them at the game and then was hanging out with them at casino sports bar in Windsor later that night.

So Benning should buy them a place in Vancouver.

On Friday, Horvat made one of his best plays of the year to set up Baertschi for his goal.

On Sunday, he carried his momentum and did it one better against the Panthers.

Great play by Horvat. Maybe an even better play by Baertschi to roof it.

Baertschi’s showing those offensive skills Benning loved him for. Can he do it on a regular basis? More importantly, can he win puck battles? Or is he destined to be another Steve Kariya?

(Anyone get the Steve Kariya reference? …crickets…)

4. So many PK issues

In the last SixPack I wrote, I was critical of how some are taking snapshots of Canucks players out of position on the PK. Anyone can do that, I said – PKs have to be mobile, so of course they’ll go out of position sometimes.

But when Biega tried to clear the puck on the PK during the first period, where did Bartkowski think he was going?

He left his man near the front of the net, shaded towards the boards but didn’t go all the way and he got caught in no man’s land. Oh and the guy he left in front of the net was Jaromir Jagr.

In the second period, the Canucks did the exact opposite – when Jagr had the puck near the net, two defensemen went to him – this time Tanev was covering him and Weber skated across the ice from out of nowhere – leaving Barkhov wide open for the pass and goal.

Now, while I can’t deny Vancouver’s positioning on the PK is bad, I’d still say it’s the personnel who’s at fault. Bartkowski and Biega is not a good look on the PK, neither is Weber.

The morning show producer made some good points earlier Sunday.

How good & consistent has Luongo’s career been? Career SV% is .919. For comparison, Ryan Miller has had 1 season with SV% higher than .919

We won’t get into that Luongo contract and who’s paying it, though.

No doubt Luongo’s having a better season than Miller, and despite never winning a Vezina, he’s been the better goalie over the course of his career. On Sunday, though, Miller went old school.

On this shot from Huberdeau, Florida’s TV crew thought Miller saved it, while Vancouver’s crew thought it hit the post.

Check it out yourself, it’s a tough one.

I’d say Miller got it. And if he did, it might be his best save this year.

In overtime, Miller had another glove save for the ages to keep his team in the game.

Too bad he cramped up before the game ended, because he might’ve won the battle Sunday.

Sports Illustrated had an article on the Canucks Saturday. The first line: “What the heck are the Canucks doing?”

It states that despite the Canucks looking like “a rudderless ship” (their words), Benning has a plan:

The way Benning says his system works, it’s to identify future core players early, deal with unavoidable growing pains in the NHL and rely on veterans as mentors.

“When you think a young player can come in and make your team, you want to make sure you have enough veteran support to help bring them along,” Benning said. “So when things are not going well, the veterans can show them the ropes.”

The Province added with an article on Brock Boeser, their 2015 first round draft choice, Saturday.

If you read it, you’ll no doubt get excited about Boeser’s abilities, as did the redditors: 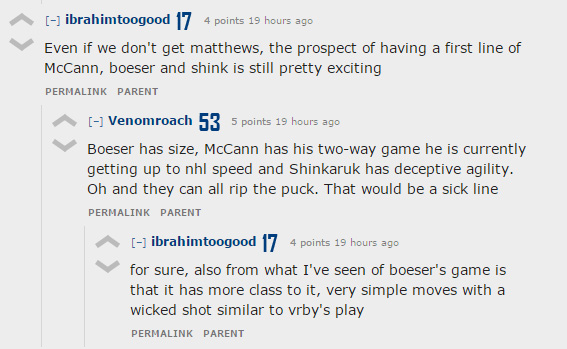 While these may be tough times for Canucks fans, the fact that we’re seeing light at the end of the tunnel shouldn’t be taken for granted. And both Gillis and Benning should be given credit for the prospects coming in.

I’ll leave you with the last line of the SI.com article:

It might not work, but this is the Canucks’ plan. Time will tell if it’s a good one.

Reading this over as I’m about to hit post, I’m wondering why I included such an obvious and unhelpful statement.

Oh well. As the wisest man in Vancouver once said: It is what it is.
[youtube id=”MWP6TacD7g0″]