Wasn’t the Florida game supposed to be a night where fans filled the air with “Luuuu” chants and everyone left smiling?

Wasn’t the best goalie on the ice supposed to be the one who used to play for the Canucks?

And after Daniel Sedin scored the winner, ending Florida’s 12-game winning streak, in overtime no less, wouldn’t you have thought that would be the biggest story coming out of the game?

Boy do I have news for you.

First, the score. Vancouver came back from a 2-1 deficit to win the game 3-2 in overtime. Daniel Sedin scored Vancouver’s first and game-winning goals, Jake Virtanen scored the tying goal, and I’d have had plenty to write about had it ended there.

But it didn’t, so I’m considering expanding this to a 8 or 10 pack. Just need to find a player with better abs than Higgins to use in the graphic.

Those watching the game were shocked to see this scene right after Daniel ended the game with his OT goal.

After celebrating, Daniel skated towards Florida’s bench and said something that started it all.

Henrik commented on what Daniel said post-game: “It was nothing towards their team, we’ve got a lot of respect for them. It was towards one guy, and he knows who he is. He acted very inappropriately. That’s something we hear a lot of every game, but that crossed the line.”

Asked what was said, Hank replied, “No, I’m not going to say that.”

DSedin on scrum: "Things were said by one of their players on the bench to some of our players (before OT). There should be more respect. "

Hearing it was Thornton who was having words from Florida bench which may have started things. #Canucks #panthers.

The Panthers weren’t the only ones trashtalking the Sedins. The team’s colour commentator, Denis Potvin, got into it too.

@strombone1 yes but what does this mean? please help. pic.twitter.com/55HX1li3yO

Potvin: “The Sedins are pointing fingers now. Normally they only use those fingers to lick peanut butter off their bread. What are they doing?”

Potvin apparently continued, calling Daniel a “low life” which has to be one of the biggest achievements of his career all things considered.

2. Daniel had a hockey accomplishment too

Lost in him being called a low-life, Daniel scored his 346 and 347 goals, which tied him with Markus Naslund as the Canucks’ all-time goalscoring leader.

Beautiful goal, as always. Vrbata, Sedin, Sedin – you don't say? Hey that might be a good line combo eh? @omarcanuck

Nice idea, but the Vrbata-Sedins experiment was broken up and not reunited until the very end of the third period, where it looked dangerous once again.

They scored on the power play in overtime.

And you already know what happened after that.

It looked like it was going to be Luongo’s night.

After he stoned Burrows for one point-blank save early, Burr gave it to him.

The Panthers ended the first period up 2-0 with Luongo stopping everything that came near him. You can see the difference he made from the possession chart through one. 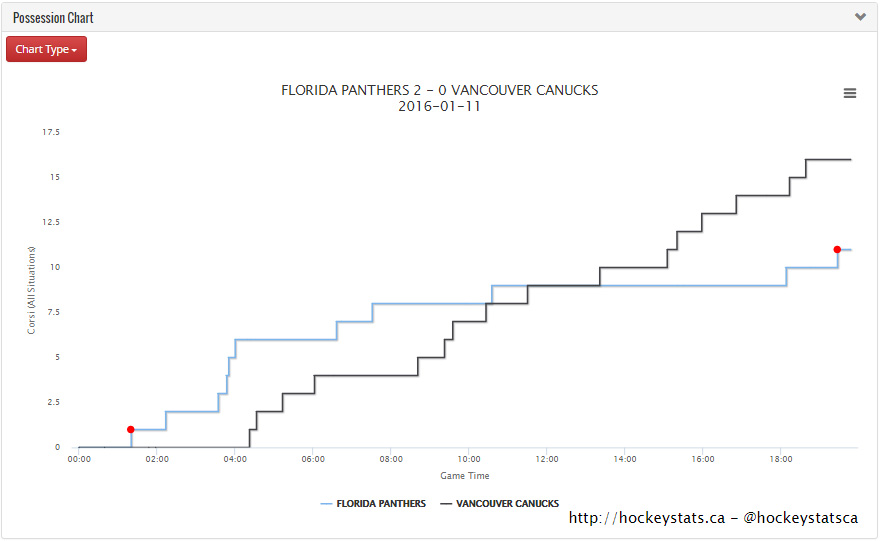 If you thought Luongo was going to post a shutout and Florida would keep the streak going, you weren’t in the minority. Obviously that scoreline didn’t hold.

Markstrom put on a show against the goalie he was traded for. He had three right at the end of the game that pushed his team to overtime. This one off a guy who has just a little experience putting pucks in nets.

The angle doesn’t show how good the save was.

@omarcanuck no one has ever won a trade involving Luongo. Not the Islanders, Panthers or Canucks.

@omarcanuck they won the trade where they got Luongo

Remember when everyone who watched the World Juniors thought Virtanen should be sent back to Junior for the rest of the year?

It was last week. So was the “Goat Medal Winner” headline.

Two games back with Vancouver and Virtanen was one of only five Canucks forwards on the positive side of the even strength corsi stats.

He’s looked like a completely different player than the one who couldn’t get it done in Helsinki, with moves like these.

He also scored the tying goal with a hell of a personal effort.

Starting to make sense why Vancouver wanted to make a permanent spot in the lineup for him.

Sven Baertschi got an assist on Virtanen’s goal and has four points in three games.

He was on TSN 1040 earlier Monday and had some interesting comments on what it feels like for a scorer to be struggling to put the puck in the net.

“Sometimes it’s tough mentally because you’re trying so hard. Once in a while you hold the stick a bit too tight because you haven’t found the back of the net for a while, so you start to tense up and the puck for sure isn’t going in.

“When you shoot on net you have to be relaxed about it, really think about where you want to shoot it. I think that’s what we’ve been doing – all the goals we’ve scored, the last play we’ve had is always an accurate pass or a hard, accurate shot, and that just comes with being relaxed at the last second.”

Watching him play Monday, you saw a skilled guy playing with tons of confidence. He was making no look passes on the power play, trying to cut outside in on rushes, and looking very dangerous.

Writing SixPacks earlier this year, I was critical of his inability to win puck battles, but he’s found the solution. Basically, he’s become so shifty with the puck, he doesn’t have to win battles anymore.

Roberto Luongo held court with Vancouver media Monday and he was asked how much fun it is to be back on a winning team.

“Yeah, that’s one of the reasons this whole thing happened. I didn’t go there to just retire. I went there to turn the corner as a franchise, get them back in the playoffs, and make a run. I want to have at least one more crack at it, if not more.”

On what Jagr’s doing at his age:

“He’s a freak of nature. I’ve never seen anybody like that before. It’s incredible the things he’s doing at his age. The work ethic he has away from the ice. All the stuff he does on the ice as well to prepare and be strong and be the player he wants to be, is amazing.”

Why things are going so well for him now:

“I’ve been working on my game a lot, as always. Things I started working on, unfortunately in Vancouver, heading back to Florida that I’ve got much better at. I just feel comfortable with the way I’m playing right now.”

Yep, it could’ve been you, Vancouver.

And on how the conversation on his face being on Eddie Lack’s mask went down.

“There was a lot of laughing. I wasn’t quite sure what was going on for a while. I’m still not quite sure, to be honest with you. It’s very flattering, is all that I can say.

“I did try to make him understand we’re still competing against each other in the same conference, so I wasn’t sure if the team would like that or not, but that’s Eddie. I just went with it.”

If you didn’t foresee the Monday-night Panthers matchup being the game of the year at Rogers Arena, you’re not alone.

Oh, and one more thing happened. 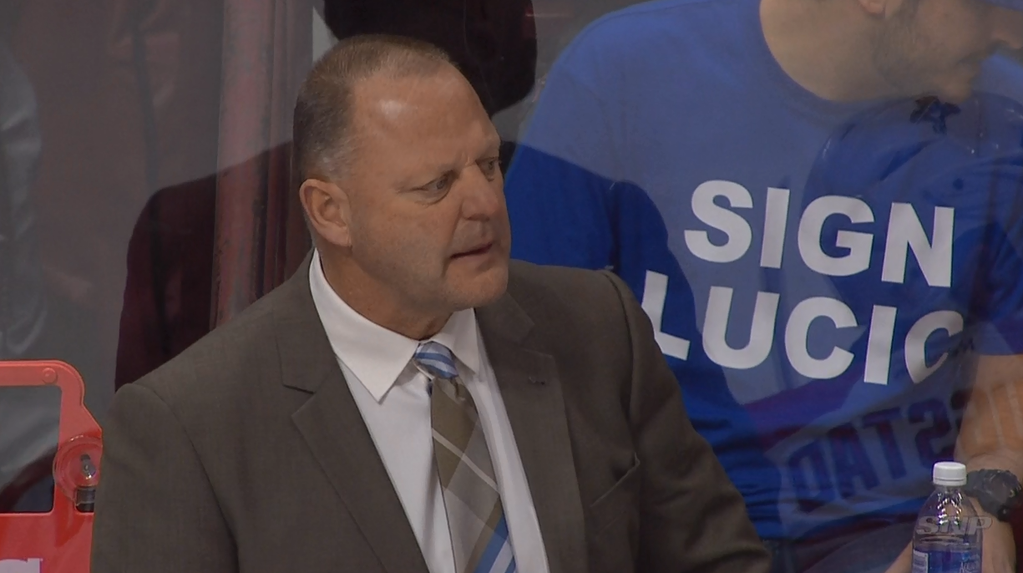 Note: Thanks to Ryan Biech, the best Canucks gif-maker in town, for his help.