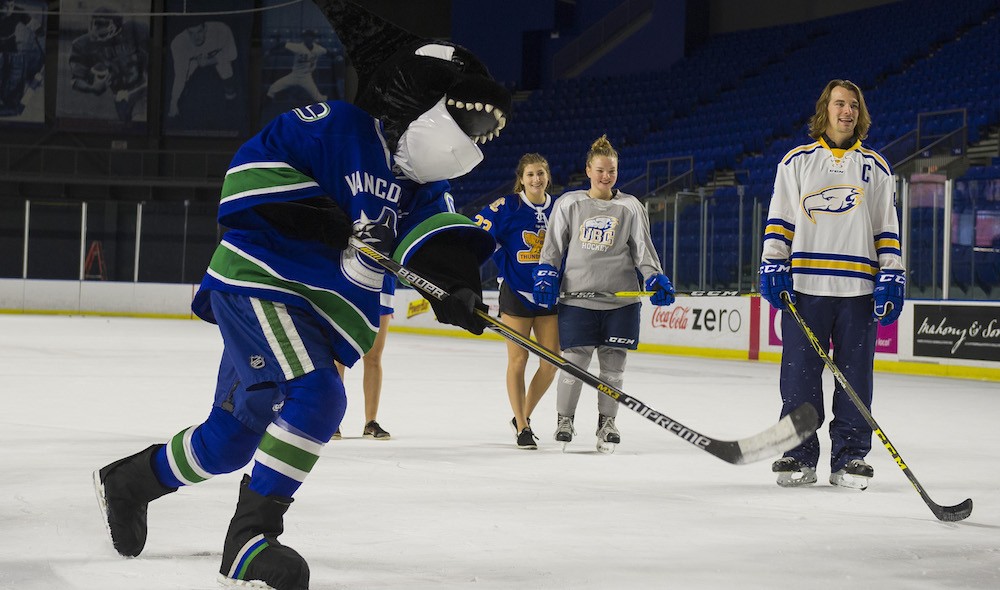 This Saturday at 11 am, fans are invited to watch the Vancouver Canucks at the Doug Mitchell Tunderbird Arena at UBC, where the team will be holding an open practice.

The event is a fundraiser for the UBC Thunderbirds Hockey Scholarship Fund, with tickets costing $47.25, or $36.75 for students. Tickets to the event are redeemable for a future Canucks home game (see below for eligible games).

“This partnership is providing an incredible opportunity to raise funds for UBC Thunderbird Hockey and have a very exciting event on UBC Campus,” said UBC senior athletic director Gilles Lepine. “We will give hockey fans a chance to see the professionals do their work behind the scenes and it will be the opportunity of a lifetime for our Thunderbirds to share the ice with their heroes.”

“The quality of men’s and women’s hockey at the university level is so impressive,” said Canucks head coach Willie Desjardins. “I’ve coached varsity hockey in Canada and some of my most memorable hockey experiences came at the CIAU level. I also know it offers students a chance to be healthier and well-rounded people because they’re able to pursue their ambitions in both academics and hockey.

“Many varsity hockey players also go on to play professionally as well. Even if they don’t, every one of them receives a first class education. UBC’s hockey program is such an important part of the university and we’re happy to support in any way we can. We’re looking forward to a great event on Saturday.”