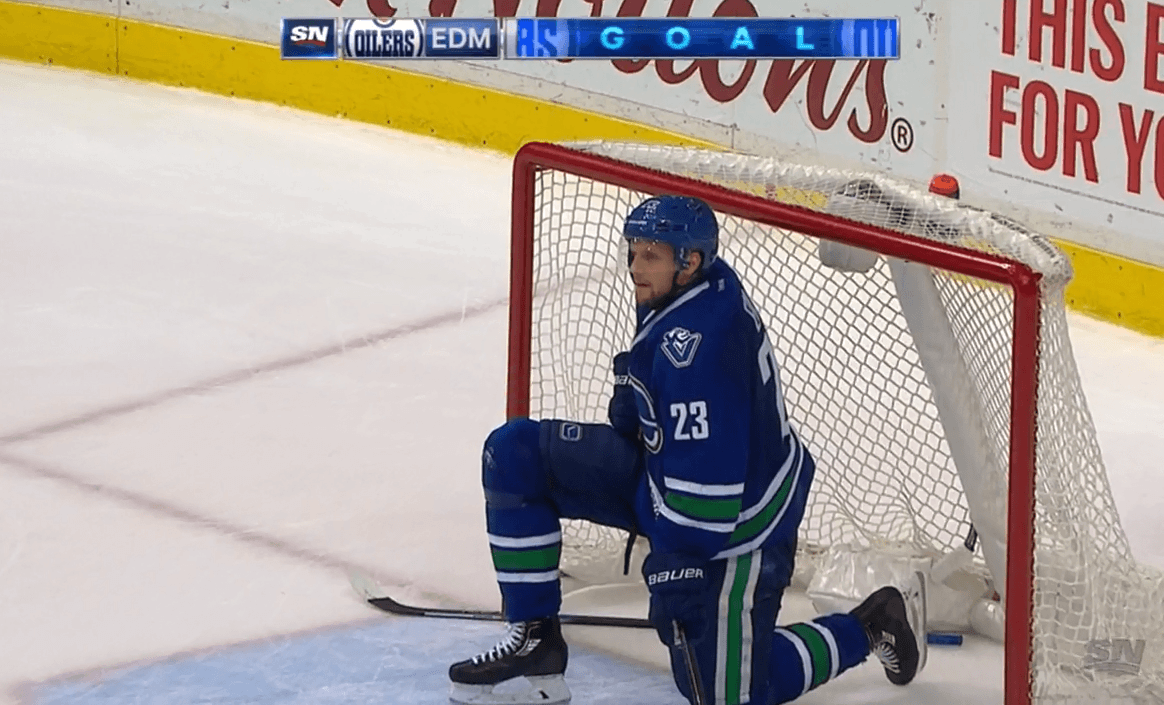 There’s a scene in the Matrix where Keanu Reeves’s character is taken into an interrogation room by Agent Smith early on in the movie. The premise is that Keanu is living two lives, and one of those lives has a future, and one of them does not. Agent Smith warns Keanu to make the right choice lest he have to bring the hammer down on him.

The Canucks this year are similar in that it feels like they have been living two lives this season. They started off the first four games being a team showing that last year could have been due to all the injuries. That this was a team that had some push back, and that reports of their death were greatly exaggerated.

Then there’s been the last four games. The last four games have felt remarkably similar to last year’s Canucks. Lack of offense. Defensive lapses. Solid goaltending. Injuries starting to pile up. Tonight’s game, the Canucks lost 2-0 to the Oilers, and while it was technically a “close game” (the Canucks had chances to tie the game in the third), nothing about the game made you feel confident about Vancouver.

The question going forward will be, which life will the Canucks choose? Are they just struggling like all teams do at points in the season? Or are the last four games far more predictive of the season than the first four?

Either way, I think we can all agree, Fin is probably at fault for all of this.

Nobody ever suspects the mascot.

Analytics aren’t necessarily going to like parts of Gudbranson’s game that wouldn’t be considered game changing. Things such as:

And to be fair, it’s not like those things can be translated into “ok well Gudbranson hit a guy, screamed he’d ‘eat his babies for breakfast’ and that’s totally the reason the Canucks came back.”

But from a purely superficial, “watching sports for the visuals” part of the game, Gudbranson is fun to watch.

When your team is in a battle, and the other team is taking liberties, and things are getting chippy, it’s honestly fun to sit back and watch Gudbranson summon his inner Willie Mitchell and go to work.

This is different from a Dorsett fight because 1) it wasn’t a pre-arranged marriage fight and 2) Gudbranson is big and mean. Vancouver fans know Kassian isn’t exactly a world beater in fights, but he can easily ragdoll a guy around. Gudbranson, instead, tossed Kassian around, and as twitter pointed out, in a very Jovanovski “One of us is getting knocked out, let’s toss them, son!” way.

In games short on entertainment there is some fun to be had watching Gudbranson snarl along the blue line.

@TheStanchion Watch it slow mo. Erik nailed Kassian. Sit down son for sure!!

Even Gudbranson’s dad got into it, telling people to watch the slow motion to see the damage his son inflicted!

This was tweeted after this:

Yes, celebrating a shut down of one rush might be going overboard, but in a season in which there aren’t a ton of highlights, things like this stick out.

In fact, Gudbranson and Hutton struggled all night to contain McDavid, yet it was Stecher who seemed to handle him the best. Stecher’s speed and smarts showed up once again, as he honestly doesn’t play like someone who is 5″9. He knows how to get in on the right angle to work his stick checks like the bad ass Richmond guy he is.

YOU DON’T DRIVE DOWN NUMBER THREE ROAD WITHOUT LEARNING HOW TO USE YOUR ANGLES IN TIGHT CORNERS. Have you ever tried parking in Aberdeen Mall? Madness.

Essentially he can get the puck out of his zone, and knows how to transition that into shot generation.

Garrett says "you can't give him room down the middle" talking about McDavid. Thing is, they didn't. He made the room himself.

Six Pack Godfather Omar is spot on. McDavid has a way of making you look bad even if you make the right play. He comes at you so fast, and can make a move to the net as easily as he dish the puck off to an open guy, that even if you do the right thing, he can make you look stupid.

It’s the kind of thing Pavel Bure used to do at high speeds, leaving defenseman looking like Dana Murzyns.

McDavid’s goal on the night showed off his crazy speed. Granlund stayed with him for around 1 second before McDavid took off and was gone. It’s like when a 30 year old in beer league has to watch as the 18 year old kid takes off and leaves him in his dust. Except Granlund is 23.

Hutton actually points at Granlund to cover McDavid, but by the time he’s done pointing McDavid is gone, and then Hutton has to get on his horse. But by then, McDavid had seen everything.

This does not bode well for the Canucks over the next 10 years.

As the Sedins get older, their effectiveness will of course go down. This is the cycle of life.

The Sedins game, which has never been predicated on speed, should allow them to continue to be effective players. And indeed they have shown up this year and given us flashes of the Sedins of old at times.

The only thing is, it comes in fewer spurts now. Yes, “spurts” is the imagery I went with.

Sometimes you see a great Sedin shift or two a game. Sometimes it wins you a game like against Calgary earlier this year. The last couple of nights, though, it hasn’t really happened.

Coach Willie did everything he could to help them out, giving them plenty of offensive zone starts (around 85% of their starts in the offensive zone), but it might simply be the Sedins being on a weak team, getting older, surrounded by young whippersnappers like Connor McDavid.

At my first #Canucks game as a fan in five years. The energy here is about what you'd think it be these days.

I don’t know how the game sounded in the arena, but it felt again like a dead building, even with Connor McDavid in the arena.

I think the first team chant was “Go Oilers Go!” in the third period.

There aren’t a lot of talking points from this game, so instead of talking about Skille and why he is on the team, here are some gifs.

There’s Ben “The old hotness” Hutton trying to remind people he used to be cool before Troy Stecher.

As I said, the Canucks had some chances this game, but Talbot played well, and the Canucks couldn’t find the net.

That’s Sbisa and Larson, dressed up for Halloween as an NHL defensive pairing. The scariest costume you will see this year.

On this play, they both pinched down low, and we watched in horror as Skille fired a hard pass in their general direction.

It got turned back the other way, and with Sbisa out of the play (full credit to Larsen for trying to get back and get into the play) Skille did the tried and true “I’m so tried I’m just gonna glide at the end and hold my stick out so it looks like I’m trying” move that I often utilize in hockey.

The only other two notes to take away from the game is that Gaunce and Megna both left with injuries (Gaunce taken down hard going to the net, looked like it might be his back), so expect some line up changes next game regardless.

@TheStanchion If he grabs headphone kid he gonna get shot

When you love Harambe but wanna see Mcdavid pic.twitter.com/T46QKhoJfe