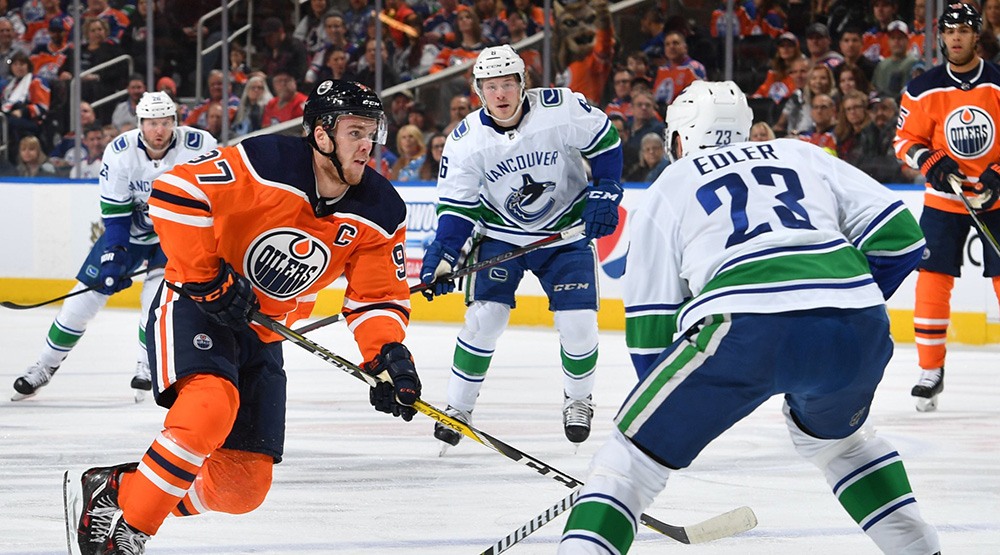 Horvat should be back on Sunday, so there’s one positive.

Start with the score: 5-2 Edmonton.

Sometimes the scoreboard lies and doesn’t really tell you what happened in the game. This one – it was pretty much right on. Edmonton had better chances and Vancouver’s defence just wasn’t good enough.

The Canucks weren’t blown out, they showed up and played hard.

So a two-goal victory? (really it a 4-2 win because the fifth was an empty netter)

That’s about the difference a couple of lightning-fast forwards – the type Edmonton has and Vancouver does not – can make.

Another positive, at least for the fans at home: despite the score, Saturday’s game was great to watch. Sure, 75 percent of that enjoyment came from seeing McDavid take flight nearly every time he was on the ice, but the rest was good too: Markstrom had a hell of a game, Edmonton’s guns were firing, and there was a Boeser breakaway too.

So let’s get into the SixPack.

1. Not the best case for Vegas

Look, no one’s going to have any issues with a player spending his week off in Vegas as long as he comes back and plays well. But starting the game with a shift like this… (he’s back on the right side covering for his defenceman here)

The best thing you can say is he was in the right spot to begin with. That giveaway and ridiculous attempted block afterwards – I mean, it would be great if he were sliding into second base – that’s a lack of confidence, a slow reaction, and just about the worst rebuttal against the argument that Vegas isn’t the best way to recharge and reset for the second half of the season.

Now, if you expected Virtanen to be benched after that horrible giveaway, you weren’t alone.

He may never see the ice again

Not only was that not what happened, instead, he got a massive promotion from the line he started on – with Dowd and Gaunce – to the Sedins’ line.

Unfortunately the Oilers scored again in the first, and guess who was on the ice again…

Nice spin. Give him that.

Before we get to the play of the game, here’s Vancouver’s power play goal that got them to 2-1.

And the play of the game – I’ll let Grady break it down for you:

Nice play by Baertschi to get the rolling puck to sit, stare Talbot down and force him to think shot before making a crisp tape-to-tape pass to Brandon Sutter. #Canucks pic.twitter.com/LXx6aRydkw

I’d take it a step further than Grady did: not only did Baertschi fool Talbot with that uncreal head fake, he forced Oilers’ defenceman Matt Benning to bite hard too, causing that passing lane to open up so he could set Sutter up for the wide open net.

If you needed a reminder Vancouver’s rebuild could be going better, Saturday’s game served the purpose.

You already saw Edmonton’s second goal above, but here it is again – and pay attention to the pass from Jesse Puljujarvi.

The Canucks never had a chance to pick Puljujarvi, of course, but what I’m trying to show here is the impact Edmonton’s young, fast, highly skilled forwards are having now.

Here was Edmonton’s go-ahead goal at the end of the second.

Bit of a mess in front of Vancouver’s net, but it was Tanev and Sutter who failed to box Puljujarvi out here.

And the Oilers’ fourth goal – the one that pretty much sealed the win for them.

Now, while the linesman definitely deserved an assist on this one, Edmonton’s young guns showed once again the results of picking the most skilled forwards with those early draft choices – this one was Draisaitl finishing off Puljujarvi pass.

Stecher, asked about that play by the linesman afterwards: “He came up and apologized. It’s over with and we’ve got to move on.”

CBC was in on reminding the Canucks too, it seemed. During the first intermission, they had a feature on Nik Ehlers.

Hrudey: “You look at his creativity – there are very few players in the game today like him.”

I’ve written in the SixPack before about how some believe the Canucks won’t scratch MDZ because they signed him as an unrestricted free agent this summer.

The argument is they don’t want to discourage UFA’s from signing in Vancouver in the future, so they need to show they treat their UFAs well. Hard to believe, I know, but it comes from a guy who has had a good feel for Canucks management’s reasons for doing things.

Here’s my argument against it: 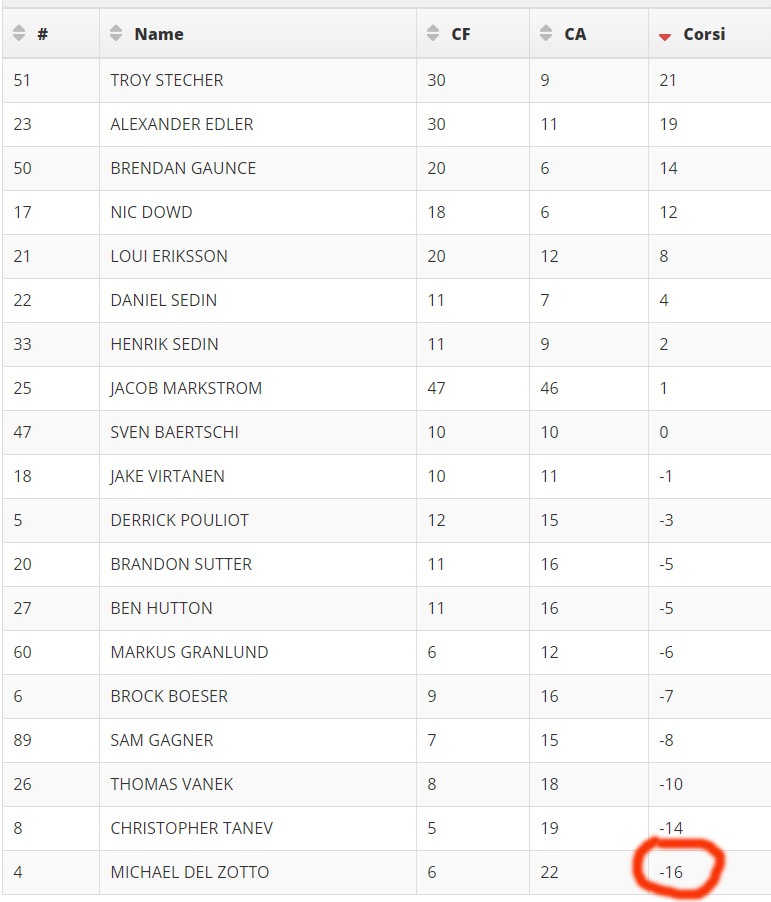 Now, because I’ve faced blowback on Twitter for using single-game corsi stats before, I’m going to explain this.

Shot attempt differentials from a single game may or may not show how good a player is, and really you shouldn’t draw those types of conclusions because of the small sample size (see Tanev near the bottom of this list). What they do show is who had a good game and a bad game.

You can see here that MDZ had a terrible game. The problem is this is becoming a trend, and when something becomes a trend, you can and should start drawing those conclusions.

Vancouver’s young superstar did have one glorious chance to show up the other team.

Would’ve been nice if he scored. Didn’t happen. He’ll get them next time.

You might’ve heard about Darren Dreger’s radio hit where he said he’s heard there will be teams offering $15-million per season for John Tavares this summer.

With the Canucks looking like they’ll have some significant cap-space coming free, it’s only natural some will wonder if they should take a run at him.

The Athletic’s Tyler Dellow gave his thoughts in an article on the Athletic this week. I’m only including an excerpt here, as their articles are behind a paywall.

I’ve kind of rolled this around and concluded that the answer is yes: if Vancouver had the opportunity to pay John Tavares, they’d probably be wise to do it. That’s predicated on a couple of things. First, although the Canucks are in a bit of a messy situation in terms of defencemen, adding John Tavares would instantly give them a high end line. It might even be a way to rejuvenate Loui Eriksson.

Although the Canucks are light on prospects on defence, adding Tavares would free them up to trade for a very good defenceman from their crop of forwards, prospects and (presumably) a relatively high 2018 draft pick.

Dellow also wrote that adding Tavares should “brighten” the timeline the Canucks are currently on.

Interesting. Here are my thoughts.

First – brighten the timeline? I’m going to speak for all of us here: We’re all in.

Second – rejuvenate Loui Eriksson? That also sounds nice, but, I mean, so does the sound of a Big Mac that’s only 10 calories…

Third – see, trading for a quality defenceman is never an easy thing to do (ask the Oilers). A team’s scouts have to target the right guy, and judging from defencemen the Canucks have traded for, my faith isn’t high. Also, Vancouver would have to give up one of their best forward prospects for a top-4 guy. Pettersson? Boeser? Horvat? Now that you realize one of those would likely have to be in that deal, are you still all in?

That’s a tough one. Would you rather watch a guy like Pettersson or Boeser light it up on another team for the rest of his career, even if it helps the Canucks get better now, or would you rather continue watching Tavares score for another team and enjoy the growth of your own team’s prospects from the start?

Canucks fans are already invested in Boeser, and I get the feeling they can’t wait to see Pettersson play in the NHL. I’m not sure the quick fix is really what people would want, and considering there’s no guarantee it works out, it’s a gamble that could cause pain and remorse for a long long time.

Of course, there’s a decent chance the decision to go after Tavares and all the moves that come after won’t be on the current GM’s watch.

I was told this evening that there is mutual interest between Vancouver and Ken Holland. The Canucks will almost positively be parting ways with Jim Benning this offseason. The one thing I have not heard is that Holland will retire.

Does this guy know what he’s talking about? No idea, but I did do some digging and my sources told me “he’s got good sources,” so you can make of that what you want.

Now, I don’t want to get too deep into this here – others have written about it – but if you think Holland is the solution to Vancouver’s problems, you might want to look closer.

If you’re hoping for the Canucks to kick their rebuild into high gear and surround their crop of forward prospects with the right pieces in the coming years, you probably shouldn’t be hiring a GM whose team is struggling to tread water, “stay competitive”, and using the same philosophy as the one you already have here (that maintaining a winning culture and trying to serve two masters – winning and rebuilding – is the right way to go).

And as much positivity as there is around the young Canucks prospects, realize that without a strong group of defencemen coming, this rebuild could look a lot like Edmonton’s did until they finally drafted the saviour.

This gif of Rob the Editor’s feelings upon hearing himself mentioned repeatedly on Episode 1 of the Black Aces Podcast is amazing.