The Canucks ended October with a 7-3 record, which is impressive when you consider they were 4-3 at one point.

So what have we learned in the first month of the season?

Yes, that’s four wins against Alberta’s sorry excuse for NHL teams, but there was one against the Habs who are legit. So let’s split the difference and call it 5-0 against Canadian teams.

2. Vrbata is a gifted goalscorer

He leads the Canucks with five goals, and with the patience and hands he shows around the net, you can tell there are many more coming.

Patience and soft hands – no wonder they call him “the dream”. (By they, I mean me.)

3. Miller is more ready than we thought to take on Vancouver

We thought he wouldn’t be able to handle the media and the scrutiny in Vancouver, but if he plays the calm, unflappable, unbeatable way he’s been playing since the 6-3 loss to Dallas, there won’t be much to scrutinize.

His GAA and save percentage are rapidly improving, but as of Saturday, he’s first in the NHL in the stat that matters most – wins. (He has 8).

Just don’t hover when he’s taking off his pads, and everything’ll be fine.

Any sane person would’ve thought a suspension to Burrows would mean Zack Kassian might finally get a chance in the top-6. But as with the past two Canucks coaches, Jannik Hansen’s honey badger work ethic (and maybe high pitched voice?) has captured Willie Desjardins’ heart. Hansen has taken Burrows’ spot on the second line, but far far more unacceptable – his spot on the second unit power play.

Good thing Kass has a new way of dealing with things – “It was good. It was fun” – or I’d be worried about his reaction to all of this.

Dave Lee-son is back with his popular wallpapers this year and they’ve got a kick-ass new design! Click on the link below the image to download the high resolution zip file. 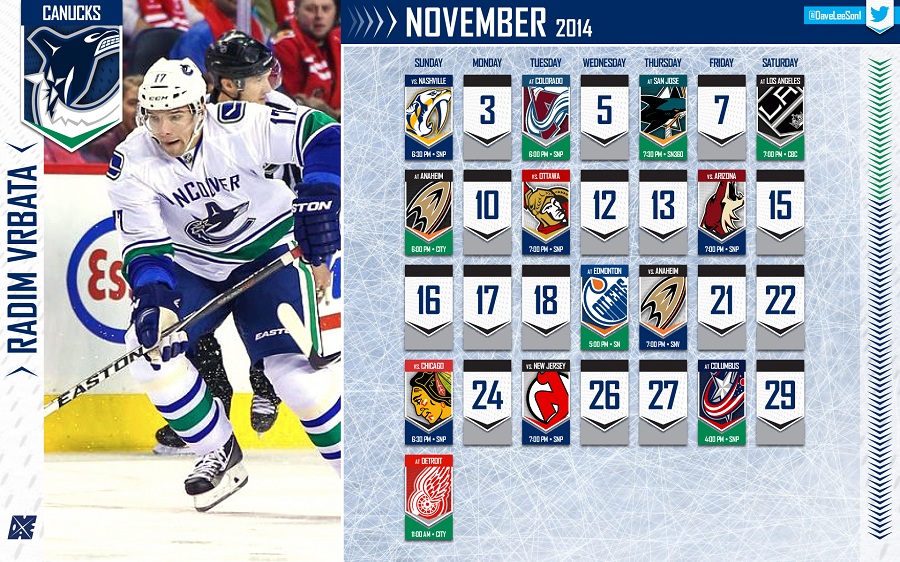