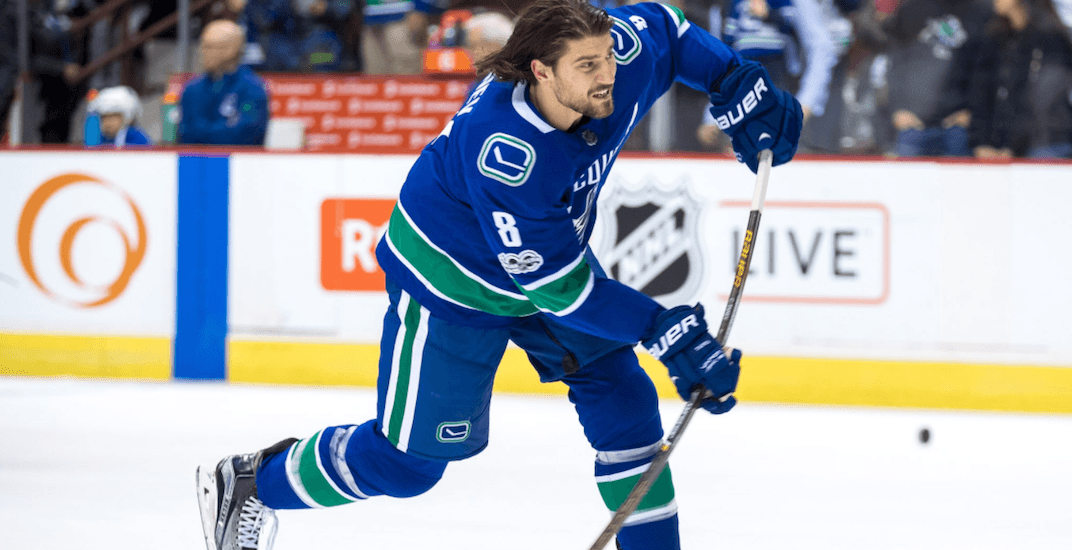 Stop me if you’ve heard this before: Chris Tanev would be a good fit with the Toronto Maple Leafs.

The smooth-skating, defensively responsible Vancouver Canuck has been the subject of trade speculation for over a year now, with Toronto frequently mentioned as a likely destination.

Sportsnet 650’s Rick Dhaliwal reports that, as we head into Friday’s NHL Draft, Tanev is indeed “in play” and the Maple Leafs are interested.

Source : Tanev is in play for sure. The Maple Leafs still have interest. Offers for Tanev not great but could improve this weekend. #Canucks

A deal between the two teams would make a lot of sense.

The Canucks are rebuilding, so dealing the effective yet oft-injured Tanev, who turns 29 in December, could help their rebuild. Losing in the near-term would hurt, no question, but Tanev’s stock could plummet as he enters his 30s.

The Leafs, on the other hand, are in win-now mode after a franchise-best 105-point season last year. They’re good, young, and are ready to challenge for the Stanley Cup. Toronto is loaded up front, set in goal, but thin on defence, particularly on the right side.

They could use a guy like the right-shooting Tanev, who also just happens to be a Toronto native. He has a modified no-trade clause in his contract, which has two more years left at a reasonable $4.45 million cap hit, but it would seem unlikely that Tanev would block a move to his hometown.

And with Kyle Dubas now in charge, you’d have to think the Leafs would be high on Tanev, who is an analytics darling. Former Canucks assistant GM Laurence Gilman is also in Leafs-land now, so it’s hard not to think that a case of Tanev fever has engulfed the ACC to some degree.

It’s not hard to connect the dots.

The question, of course, is the price tag.

Notion is right now that teams are lowballing the #Canucks on Tanev. GMs are well aware of injury history. Best thing Benning can hope for is that he somehow creates a bidding war.

The Leafs have a number of good, young players that would interest the Canucks, but so do the Tampa Bay Lightning and New York Islanders – who could also use a blueliner like Tanev.

If teams get into a bidding war for Tanev, it could drive the price up to a reasonable level for Canucks GM Jim Benning. Not to the William Nylander level as some Canucks fans have hoped, but a level below that.

Other players in the Leafs’ organization likely to interest Vancouver are Timothy Liljegren, a defenceman taken 17th overall in the 2017 draft, and left winger Carl Grundstrom, a 2016 second-rounder that’s already had success in the Swedish Hockey League and the AHL. The former is likely too high of a price, the latter probably too low.

Defenceman Travis Dermott is another player with an upside, having played 37 games as a 21-year-old last season after being taken 34th overall in 2015.

If they’re talking draft picks, the Leafs hold the 25th overall pick in this year’s draft, which the Canucks would probably go for. They also hold San Jose’s second and third rounders.

Both teams are in a spot where they have to do something this offseason. The Canucks, who were dreadful last year, can’t return to training camp with the same lacklustre defence corps as before.

And the Leafs can’t afford to not address their most pressing need on the blueline and suffer a third-straight first round exit.

Really, there should be some level of bidding war for the services of the eight-year pro. He’s as dependable as they come when healthy. Though not a big point producer, he skates well, can move the puck effectively, and makes everyone around him better.