The most amazing Canucks-themed man cave we’ve ever seen isn’t in Vancouver. It isn’t even in British Columbia. Heck, its owner might not even have a good reason for cheering for the Canucks in the first place. 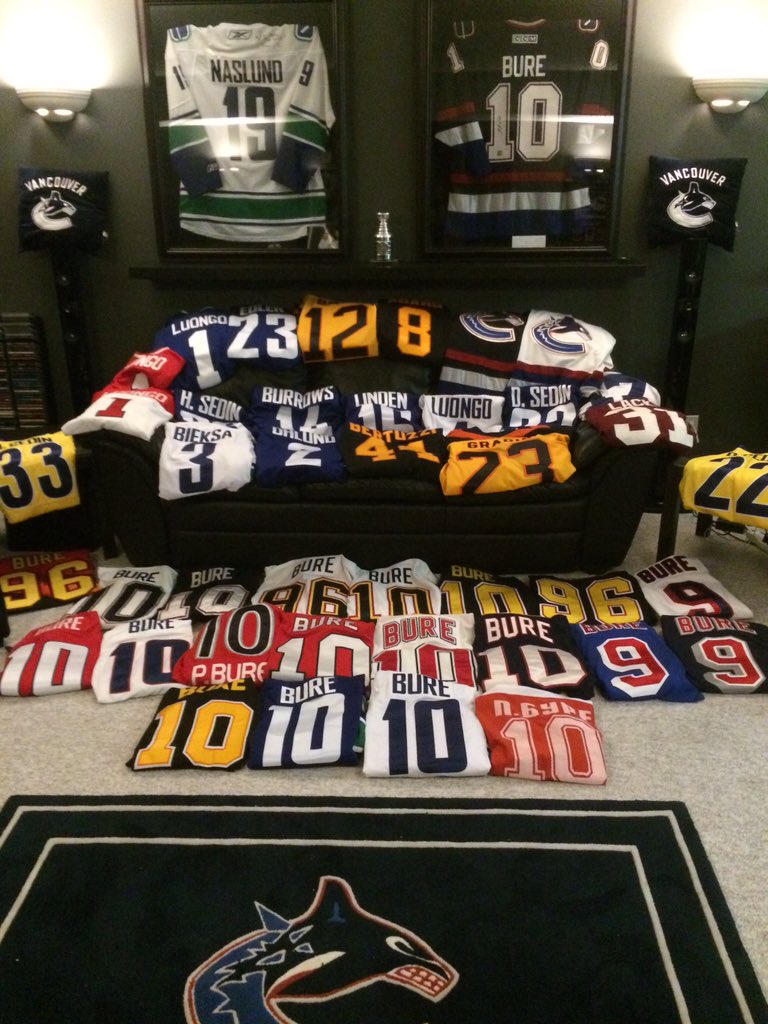 Meet Mike Stefanuk. This is his basement, and he owns every one of those jerseys.

Mike’s collection of Canucks memorabilia stretches far beyond a few jerseys and hats. He has an entire floor of his house dedicated to the Canucks. He doesn’t live in Vancouver, so he gets to stretch his shrine further than 500 square feet.

Mike was born and raised in Saskatoon, Saskatchewan, and, somehow, became a diehard Canucks fan.

We first got wind of Mike’s incredible Canucks man cave after Daniel Sedin’s hat trick earlier this season. That’s when the #TweetDanielAHat hashtag was born.

I asked Mike if he would throw his hat on the ice if he was at a game and a Canucks player scored a hat trick. Of course he would. And he has:

“For sure! I did it in ’94 at neutral site game in Saskatoon. They were playing the Oilers and Bure scored his third goal to win it in overtime. I ran down to the glass and threw my hat on the ice. For some reason, when the team came onto the ice, Geoff Courtnall flicked the hat back over the glass. Some other kid grabbed it and took it home. But I didn’t care.”

You may recognize Mike from his many appearances in our post-game SixPack articles, for which he became somewhat of a regular. But I never knew about this man cave until recently.

I needed to find out more. 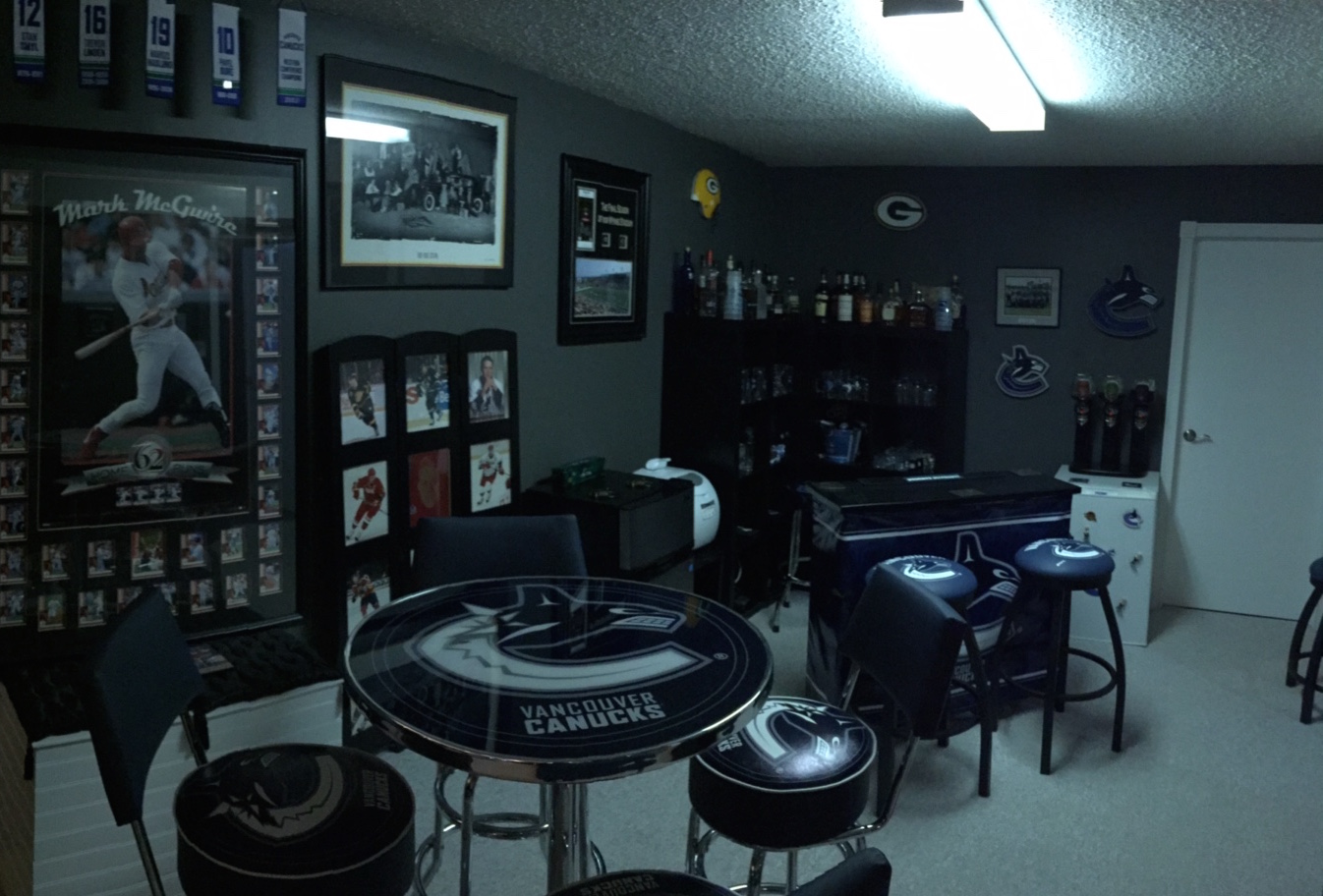 He explained to us that his uncle tried to brainwash him as a kid in the 1980s to become a Habs fan. Mike was going to have none of it.

Forget all those Stanley Cups and an iconic logo/colour scheme, Mike liked the black, yellow, and orange of the Vancouver Canucks.

It was as simple as that. 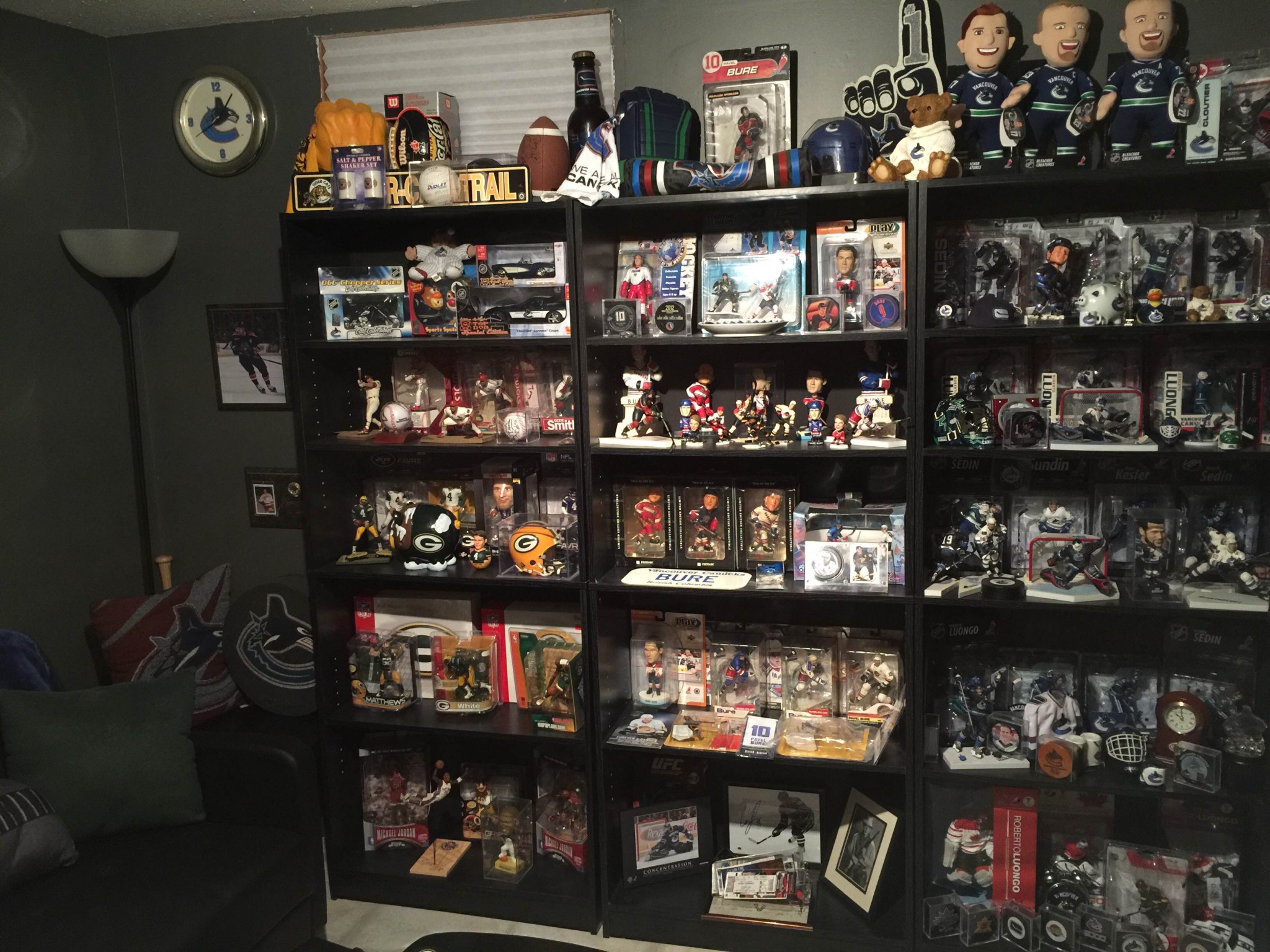 I’m from Vancouver, so I grew up a Canucks fan. That makes sense. But I’m fascinated with fans that cheer for random teams. I’m not talking about all the people around Vancouver that became Red Wings and Penguins fans in the ’90s. It’s easy to be a frontrunner.

Mike is different. Mike is from Saskatchewan but he doesn’t like the Rough Riders. He’s a Ti-Cats fan. Why? No reason. That takes guts. 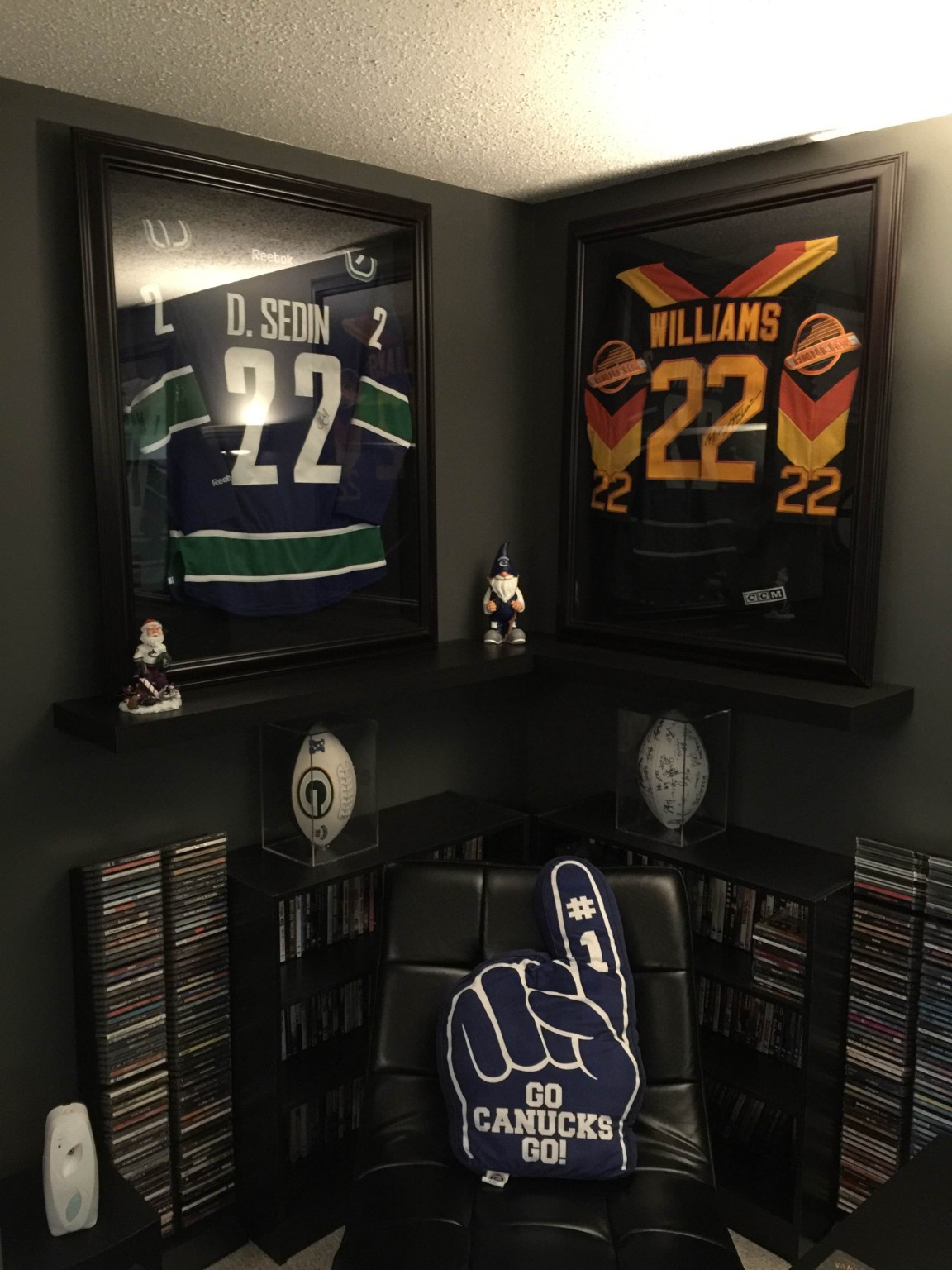 He became a Canucks fan in the ’80s when they stunk in just about every way imaginable. That’s admirable.

We asked Mike how often he’s been to Canucks game in Vancouver. He said he’s only been to Rogers Arena twice.

His last game in Vancouver was for Pavel Bure’s jersey retirement game. Mike might be Bure’s biggest fan. He owns 22 jerseys, about 1,000 hockey cards, and countless collectables of the Russian Rocket. As luck would have it, he was approached by someone on the concourse to participate in a contest on the ice during the 2nd intermission.

He didn’t win, but that’s pretty cool (I assume this clip will be on a video loop somewhere in his basement soon).

Here are some more pictures from the cave: 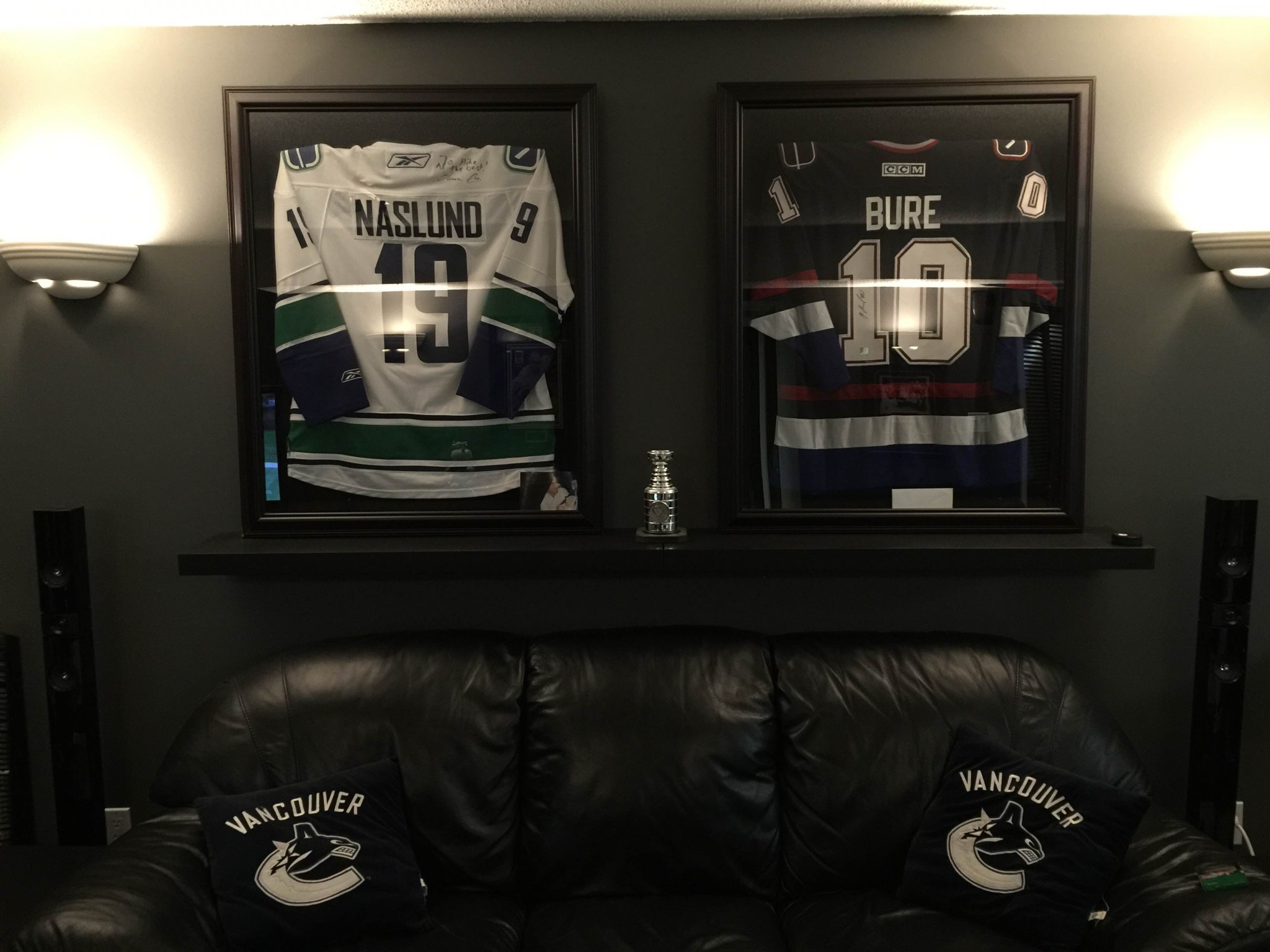 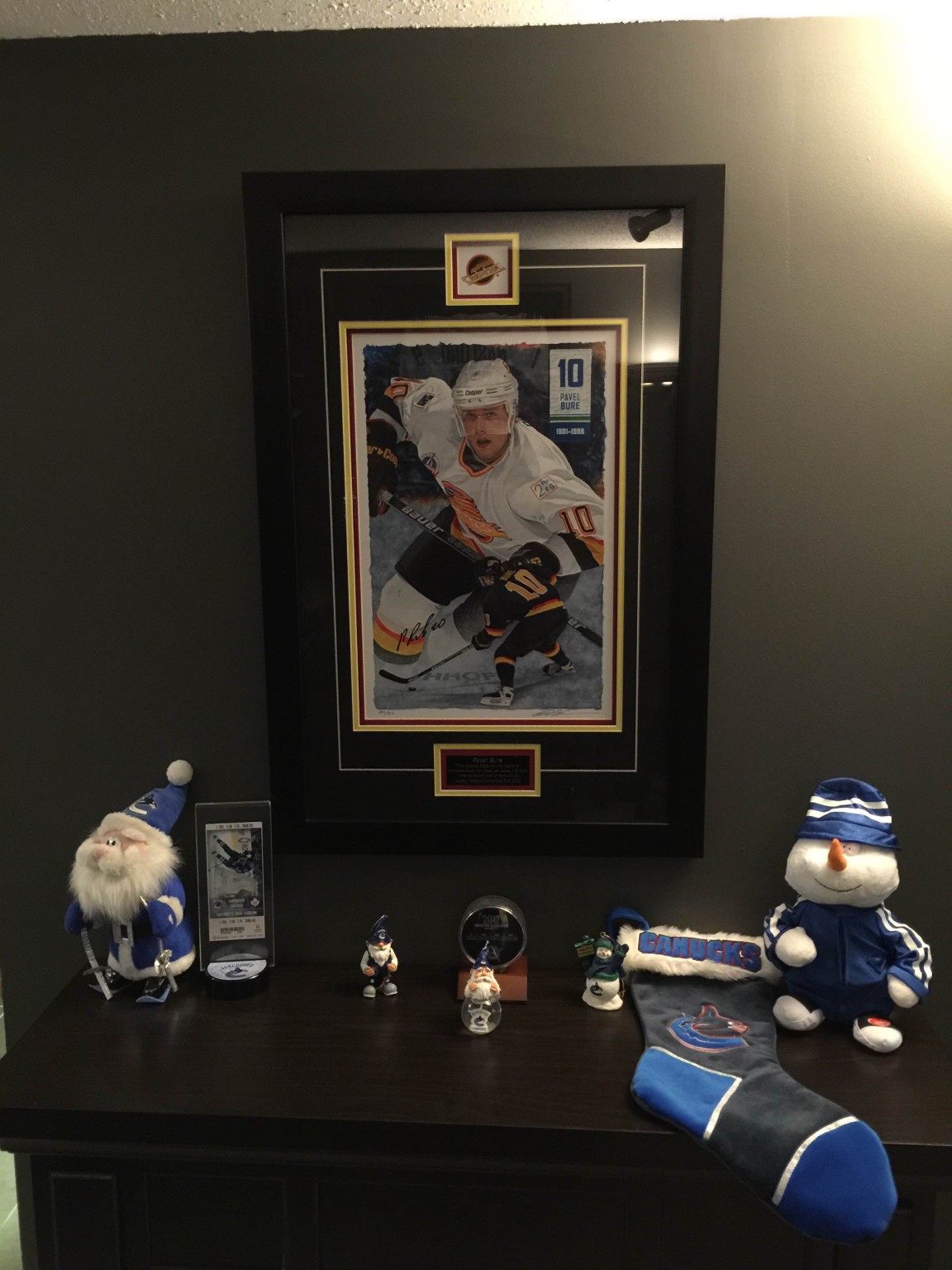 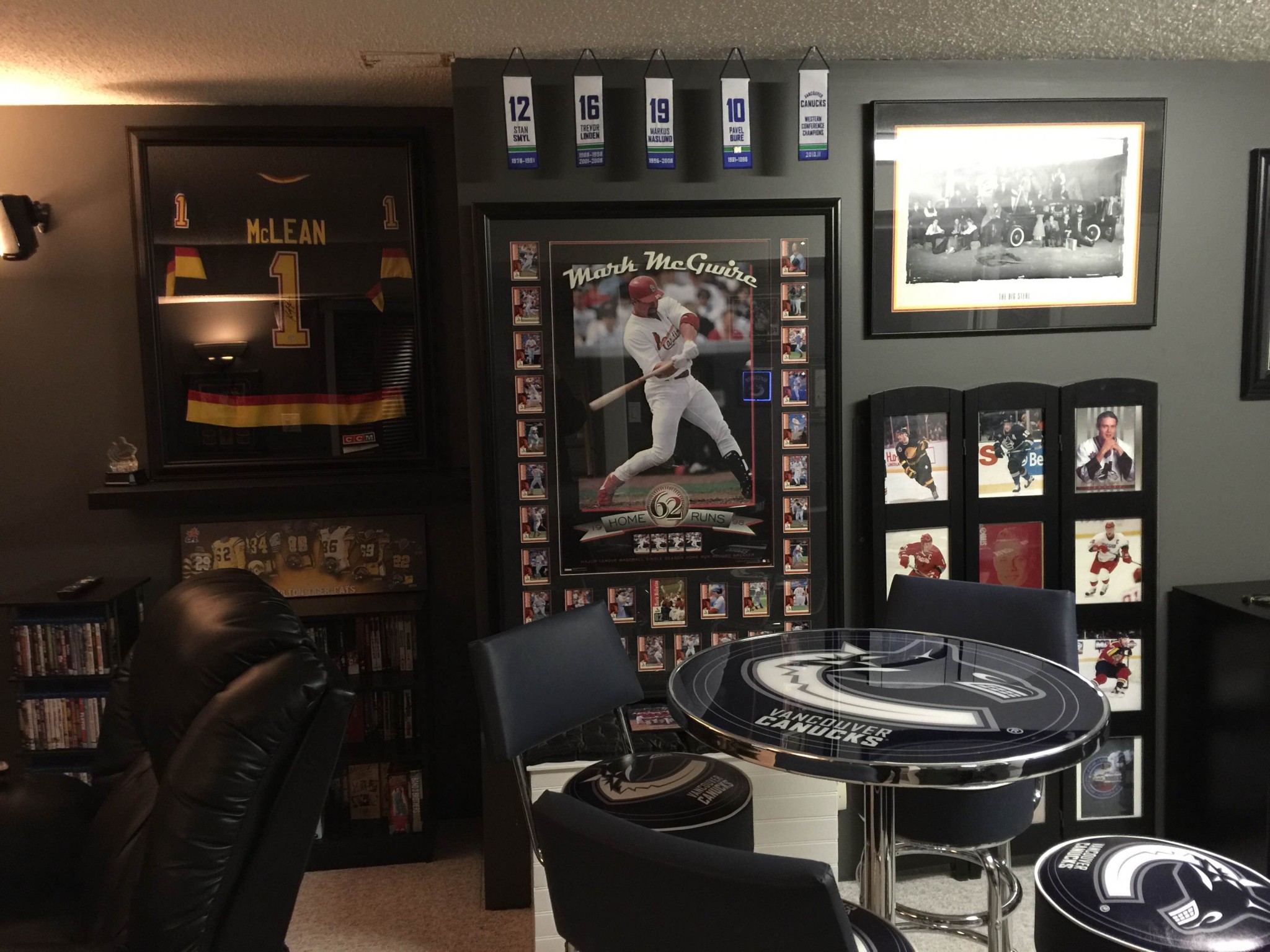 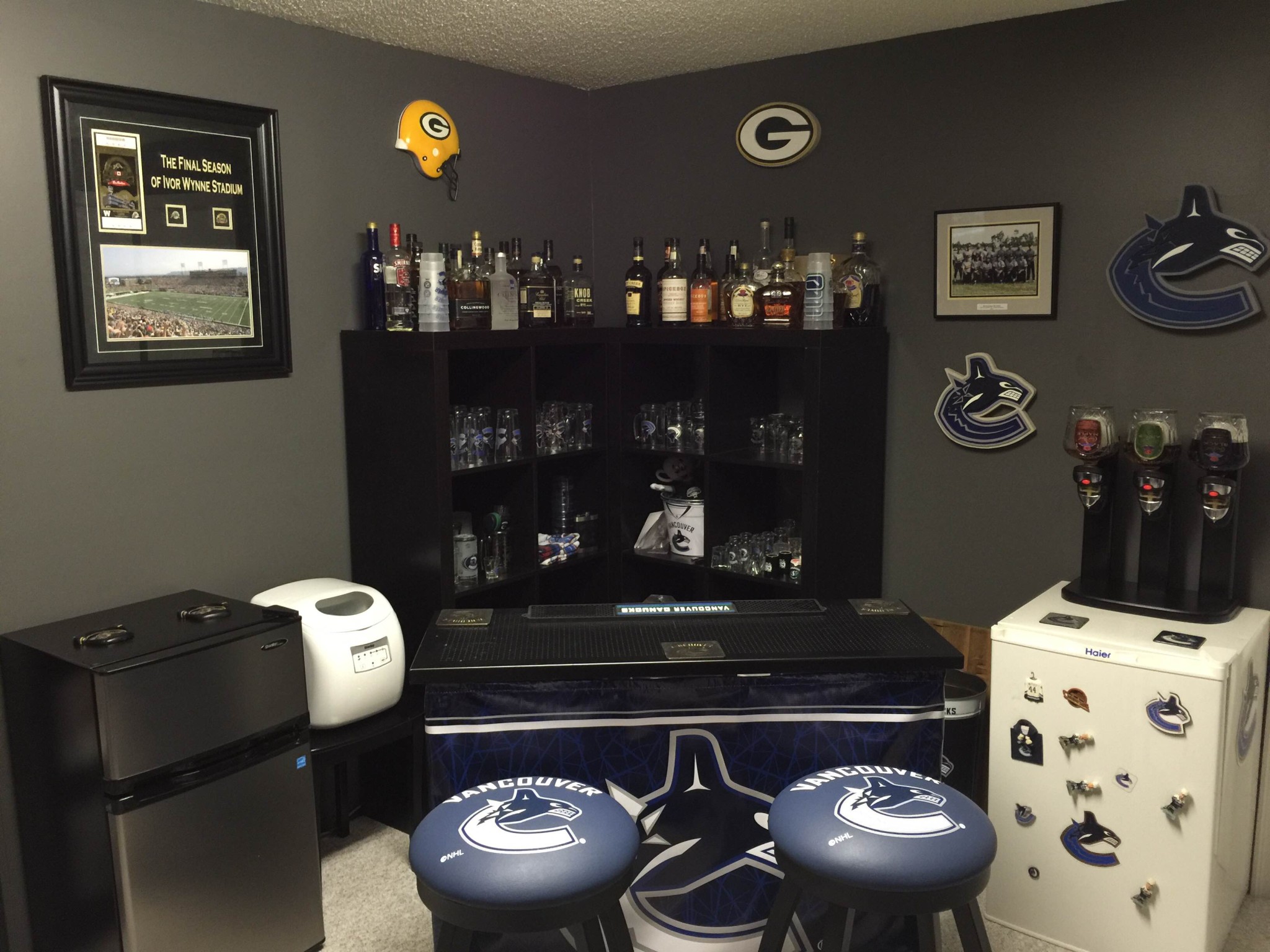 Cheers to Mike and his amazing Canucks man cave.