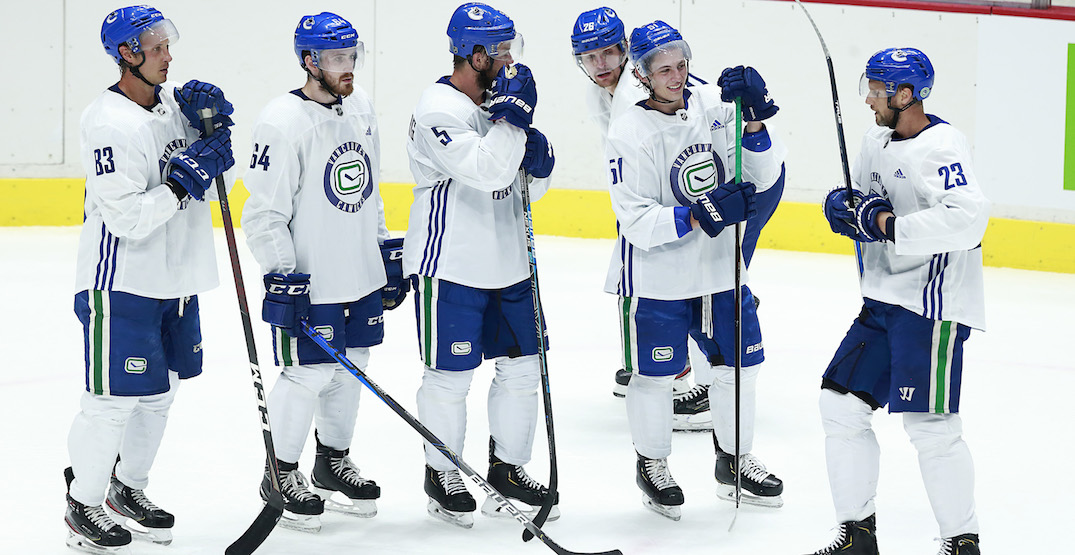 The Vancouver Canucks were back on the ice for their first non-socially distant practice since March today, as training camp kicked off at Rogers Arena.

There was one surprise absence, in the form of Micheal Ferland, who the Canucks said was “unfit to play.”

That’s the verbiage mandated by the agreement between the NHL and NHLPA, meaning we don’t really know what’s wrong with Ferland. Given we’re in a global pandemic, such a policy can lead to wild speculation, but such is life in the NHL this summer.

Kole Lind wasn’t on the ice either, as he was a late replacement for Sven Baertschi, who has opted out of returning this summer. Josh Leivo isn’t on the training camp roster, as he’s still recovering from a broken kneecap.

For what it’s worth, reading between the lines from GM Jim Benning, whatever kept Ferland from the ice didn’t sound overly serious.

“He’ll be back here, he’s been skating, he feels good,” said Benning. “It’s more safety than anything else.”

The Canucks took line rushes right away at practice, giving us an early indication of how the team might look in Game 1 against the Minnesota Wild.

Green made one notable change with his defencemen, reuniting Alex Edler with Tyler Myers. Edler had been playing with Troy Stecher when the season paused.

The Canucks are carrying four goaltenders, with Louis Domingue and Michael DiPietro around as insurance.

We’re still 19 days away from Game 1, and things can change, of course.

But it was interesting to see Travis Green tip his hand, saying that he wants to get his group organized sooner than a usual training camp.

“We know this group,” said Green. “I think we have a good idea on part of our lineup what it will look like. There’s also a reason why we’re here, to see how everyone looks. I know there’s still three weeks until that first game but it’s going to go by fast. Within two weeks we need to see who’s at their best and who’s ready to play the first game.”

As for the tempo of practice, Brandon Sutter said it was a typical first day of training camp, in the sense that it was not easy for the players.

“That was a pretty normal day one,” said Sutter. “Since Greener’s been here we haven’t had an easy day one.”

“That felt just as awful as it usually does.”

The Canucks have had hot starts in each of Green’s three seasons in charge. If that happens against Minnesota, the Canucks should be playing in their first best-of-seven playoff series in five years.