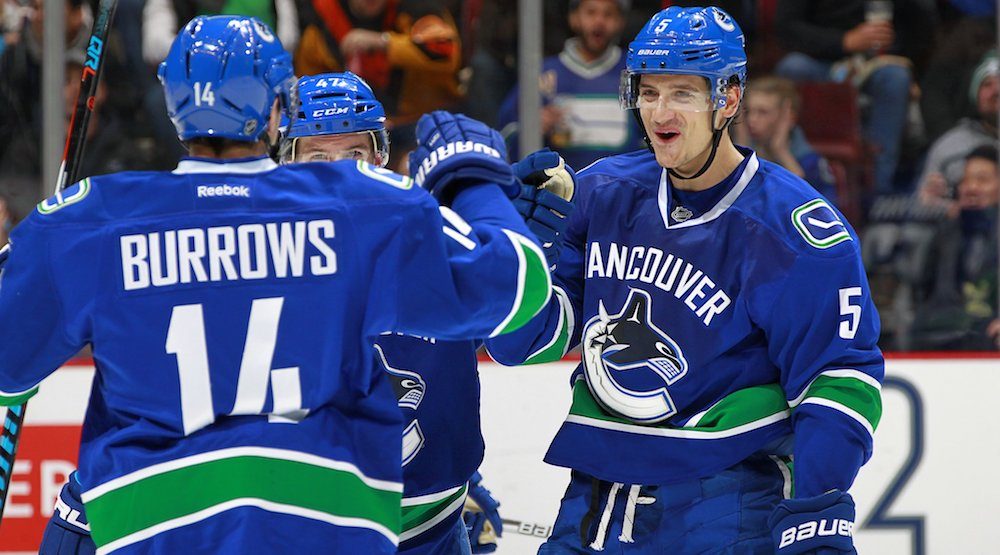 Clearly embarrassed by their abysmal performance against the Carolina Hurricanes, the Vancouver Canucks returned home to Rogers Arena and were out to prove something.

Boy, did they ever.

#Canucks beat the #TBLightning for the second time in 8 days winning 4-2. Horvat, Sbisa, Sutter and Burrows the goal scorers.

It’s hard to tell what the Canucks were more interested in celebrating on Friday night.

Mattias Ohlund being inducted into the team’s Ring of Honour or getting to play against the Tampa Bay Lightning who, unbelievably, seem to have some difficulty against Vancouver.

There are not a lot of teams you can say that about.

It was a good night for a win, but the 4-2 Canucks victory is not without it’s “buts”.

Without Stamkos, Kucherov, Palat, and Callahan, the Lightning are missing their 1st, 2nd, 4th, and 10th leading scorers from last season.

Putting into perspective, that would be the #Canucks without Henrik, Daniel, Hansen, and Tanev. https://t.co/Irc7rN04kJ

Captain Bring-Down makes a good point. Still, it’s always nice to see the Canucks celebrate a win after celebrating one of their best defenceman of all-time.

1. Mattias steps into the Ring

Congratulations to Mattias Ohlund, the sixth member of the #Canucks Ring of Honour! pic.twitter.com/KZhfx37M34

I now consider myself a terrible fan of this team. Without the assistance of Google, I couldn’t tell you who else is in the Ring of Honour.

Except Pat Quinn. I know he’s there. Because I’m not that terrible of a human to forget the big Irishman.

Quite deservedly, the praise for Ohlund was in abundance at Rogers Area as Ohlund and his family received gifts and hugs from old teammates and a video tribute narrated by his old roomie Trevor Linden who sounds like he could take a part-time job narrating a documentary about the printing of stamps.

Even those who couldn’t be there weighed in:

Happy to see Mattias "Papa Bear" Ohlund getting his special night in Vancouver this evening. One of the best teammates I have ever had!

Well it’s better than the “Big Viking” which I don’t think was actually a name that was ever said. Then again, I didn’t even remember that Harold Snepsts was in the Ring of Honour so what do I know?

And the celebrations weren’t limited to the Tampa Bay Lighting and Vancouver Canucks on Friday night. Former Canucks Coach (and now Associate Coach of the Ottawa Senators) Marc Crawford tuned in to wish his former defenceman well:

So pleased the Canucks are honouring Mattias Ohlund. The Big Viking played it skilled or tough, he was a great Competitor and a better Man

It was revealed before the game that Erik Gudbranson wouldn’t play tonight due to a wrist injury suffered in Carolina.

Erik Gudbranson will not play in tonight's game vs. Tampa Bay due to a wrist injury. pic.twitter.com/Goy69LHfRz

So just as Chris Tanev returns, Gudbranson exits as the parade of injuries on the Canucks blueline continues.

I am by no means a Gudbranson hater, but not a Gudbranson apologist either. I’m actually pretty neutral on him because I am delusional hopeful that his performance will improve as he gets comfortable in Vancouver. No matter what your occupation, it takes a while to get comfortable in your new environment. Sure, some adapt much quicker than others but that’s all up to the individual.

However, I am 100% on board with ending the Hutton-Guddy pairing because Willie Desjardins is way too focused on a concept that doesn’t necessarily work.

He does that quite a bit…SUTTER-SEDINS..

But as frustrating as Gudbranson has been, especially given the cost, I do think he will eventually settle in and provide the Canucks with what they need on their blueline.

Having said that, feel free to point to all the charts and numbers from last year that completely contradict my belief that he will be better.

I haven’t done a SixPack in a long while so I would be remiss to not take the opportunity to mention Luca Sbisa for old times sake:

Sbisa scored the goal that put the Canucks up 2-1 in the second period.

And then my favourite thing ever. Luca Sbisa’s goal song:

With a song selection like that, at the very least Sbisa is a great guy to have in a locker room. Which is typically what you hear about the guy on your beer league team that can’t skate.

Vegas is so lucky…

4. A moment of appreciation.

Reason Hansen is awesome: He drop kicks the puck to make a pass when his stick breaks #badass pic.twitter.com/tD4KNqh0lE

Calling this the "Hansen Hat Trick":

1. Slip at blue line
2. Lose stick
3. Do a baseball slide to keep the puck in#Canucks

Feels like a microcosm of the Canucks season. Stumble, look terrible doing, and stay afloat for absolutely no payoff.

Watched a lot of hockey, never seen a guy do a soccer slide check like Hansen did before

Horvat's at 0% o-zone starts through two. Once Willie has you pegged, you're pegged for life.

Does this look like a 0% offensive zone start player to you Willie?

That was the game winning goal by the way…

Maybe I can understand Willie’s thought process if he was solely focused on developing Horvat and making sure he understands the defensive side of the game before unleashing his offensive potential. However, we keep hearing about how the Canucks just want to win.

And seriously, someone has to score to win and this is currently happening:

last 16 #Canucks goals, just one by a Sedin. So others starting to carry the scoring load. A couple of d-men chipping in, too.

It’s great that others are chipping in. But if you want to win, maybe adjust a little?

So Torts can get his 500th regular season win in Vancouver.

Those @BlueJacketsNHL, so hot right now. Their win over the #Flames makes it eight straight victories. https://t.co/wiMg9M8kZh pic.twitter.com/YsLlBWv6i1

How in the why?

Truth be told, I don’t hate seeing the Blue Jackets or John Tortorella having success. He just seems like the type of coach that needs to be in the perfect situation to succeed and it looks like he has found that in Columbus.

He just seems so excited to be there right now:

#CBJ Tortorella was asked about Wennberg's fight, but cuts off the question with "Great left! Great left and then he switched to a right."

I didn’t see this interview, but I hope his was mimicking Wennberg’s fight and excitedly punching the air.

No, there is no reason to lament not having him as a successful coach right now because his situation here was a complete dumpster fire.

And despite the win against Tampa Bay not-withstanding, every situation in Vancouver feels like a dumpster fire these days.

But after a solid win, Canuck fans can enjoy this one.