There are a few ways to look at Saturday’s overtime loss to Tampa Bay.

One – Vancouver gave away an extra point within their grasp.

Two – they did well to grab one point by scoring late in the third.

Three – the Canucks really are screwing up their chances at landing Auston Matthews.

Whatever way you take it, and I’m feeling Canucks fans getting more confused which way to cheer with every passing game, you have to be impressed with the way Vancouver played against Tampa.

The Canucks came back and tied the game at 2-2 with three minutes left, and they outchanced the Lightning 6-4 in OT (according to War-on-ice.com).

No choice but to lead this with Bo Horvat. He followed up the three goals he’s scored in his last two games with what might be his sickest move of the season on one of the best defensemen in the league.

It was Baertschi’s goal, but that move on Victor Hedman was what Canucks fans were dreaming about after last season’s playoffs.

Done there? No chance. Horvat was the one who tied the game with three minutes left.

Nice finish by Bo, but how about Ben Hutton’s rush? When was the last time we’ve seen a Canucks’ defenceman have the confidence to rush the puck like that?

I mean, Yannick Weber and Matt Bartkowski try once in a while, but let’s be serious.

Unless you’re some blind, always-positive Canucks fan, you probably didn’t expect much from Vancouver in OT.

That’s what happens when the team has a 1-7 record in the extra frame, and when they’ve admitted they play for the shootout.

So don’t feel you’re alone in wondering how Vancouver outplayed the Lightning in the extra frame.

But it happened. Vancouver led Tampa in OT corsi by a 7-4 edge with the Sedins having several glorious chances to win the game.

Too bad they made the worst play in the overtime too.

While we usually include the Canucks’ highlights video at the end of the SixPack, I’m putting it here so you can see it for yourself. Go to 5:15 in the video and you’ll see the chances the Sedins created followed by their slow skate to the bench that cost them the game.

If I asked you to guess which forward had the most ice time after the Sedins, whose name would you choose?

Burrows would be a strong pick considering he played on their line and plays on the penalty kill and power play.

Horvat would make sense too, considering how well he’s played lately, that he’s the second line centre, and he’s a special teams guy as well.

But it wasn’t them, and you might want to sit down for the answer…

Dorsett had 17:41 minutes of playing time, which is first/second line type minutes.

Even crazier – Dorsett was second amongst forwards in even strength ice time, behind only Henrik Sedin.

Using playing time to figure out which order Willie ranks his lines, you see Virtanen-Vey-Higgins last, and a jumbled mix of Baertschi-Horvat-Vrbata and Prust-Cracknell-Dorsett as the second and third groups.

It’s all a bit confusing.

Coming back from a disastrous World Junior tournament in Finland, Virtanen was saying all the right things. He spoke about his experience with Team Canada on TSN 1040 Friday:

“I learned a lot going to Helsinki. I think going to the World Juniors was a good experience for me. I won last year and this year was obviously devastating, but you’ve gotta move on from that. It’s not the end of the world, you can build off that and it’s something you can work off.”

On if he was angered or inspired by the criticism he felt after the tournament:

Virtanen spoke about how his family reacted to the “Goat Medal Winner” headline too:

“My dad just said don’t worry about it… I think my grandma was a little more mad, but other than that it was fine. It’s something you’ve just gotta move past. It’s not a big deal to me.”

How did he play in his first game back in the NHL? Willie, post-game:

“He could’ve been our best player in the first period.”

Looking at the stats at the end of the game, Virtanen led all Canucks at even strength with a 58.44 corsi-for percentage.

He was good, so how can the Canucks make sure he keeps going in that direction?

@omarcanuck Yup, might need to employ @theprovince headline writer as motivational speaker tho.

Jim Benning spoke Friday on what he thinks would be best for Virtanen (on TSN 1040):

“When I was in Boston, we kept Milan Lucic as a 19 year old, and I see a lot of similarities between the two players. In the second half of the year, Milan really got confidence and took off and got eight goals and 27 points playing with David Krejci.

“I think this is a good learning experience for Jake. We can control his environment up here and how he works out and the types of thing we want him to develop skillwise. I think all things considered we keep him here and keep working with him.”

Before I go on…

Yes, that or “getting in on the forecheck.”

Virtanen spoke with TSN 1040 after Saturday’s game and dropped this:

“I think the coaches and management are coming up with a plan, like the same thing with Jared (McCann)… I think I will be staying, but I guess we’ll see what happens.”

Assuming Virtanen stays, the question becomes what should fans expect from him in the future. As many are aware, Ray Ferraro said he thinks Virtanen lacks vision and will become a Jannik Hansen-type player.

Benning was asked if he thinks Virtanen will eclipse Hansen Friday.

“Knowing Jake, he’s got a good shot. We haven’t really seen that side of his game yet, but when he’s up and going I expect him to be a 20 or 30 goal scorer and play a power forward style game.

“I’m bullish on Jake Virtanen. I believe when we have a team that’s ready to compete for the Stanley Cup, he’s going to be a part of our success.”

Watching him against the Lightning, it sure looks like he’ll get there.

Did you think the Goat Medal Winner story was dead? Did you hope it was?

After Vancouver sports radio used it to fuel their shows all week long along with Sportsnet during their Canucks games, HNIC took it’s crack at the Province’s headline during the first intermission Saturday night.

Strombo: “They kind of laid a lot of the blame at Jake Virtanen’s feet. As it typical with any sports city, certainly a passionate Canadian sports city, some of it was just downright Jack-assery, including that headline right there.”

Hrudey: “That’s horrible… I can’t imagine criticizing those young kids anyway. Just the thought of it – they’re young, they’re not paid, they’re representing their country, they’re trying to do their best. He didn’t play as well as everyone was hoping, but that’s no reason to slaughter the guy.”

Kypreos: “That headline unfortunately was the media taking advantage of that sensationalism. It’s a one off.”

After making it through the HNIC gauntlet, can we safely say the horse is officially dead?

Now, to leave you with something positive, Elliotte Freidman’s thoughts on where Steven Stamkos might land as a free agent.

“I wonder – if Vancouver wants to get in on (Stamkos), they’re going to have the opportunity to do it.

Depending on what Jim Benning decides to do, these are over $15-million in salaries that are coming off the cap in five players… I look at Vancouver, you know the building hasn’t always been full… I wonder if they’ll consider it.”

They even had a graphic for it. 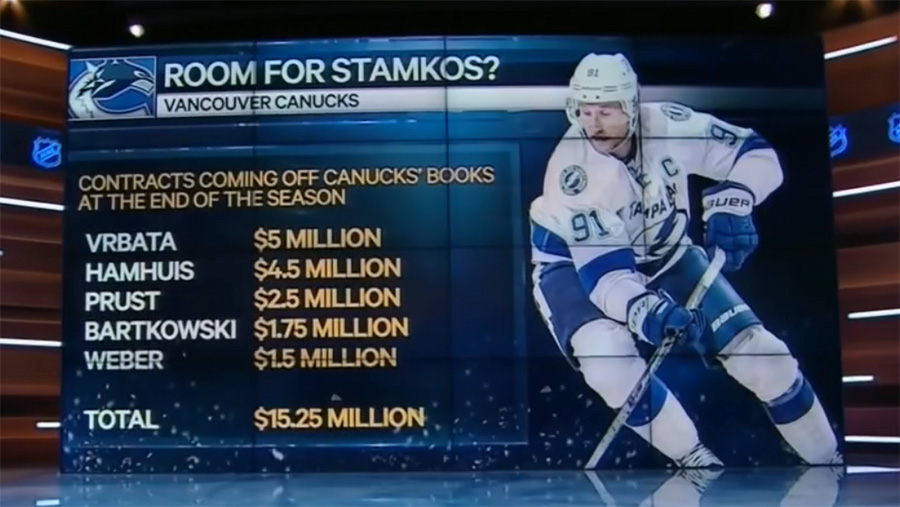 Looks like Canucks fans finally have something else to talk about.