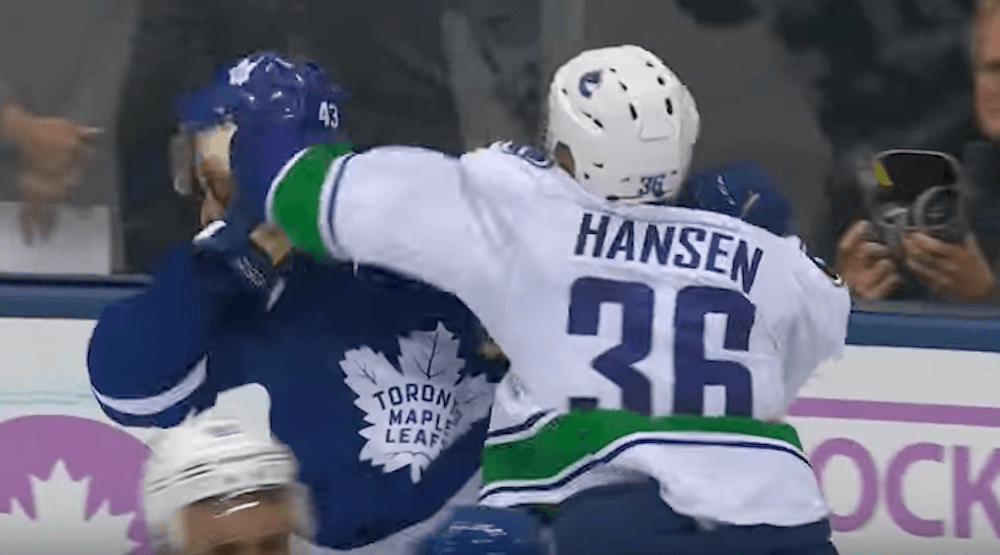 While Nazem Kadri’s hit on Daniel Sedin on Saturday drew the attention of most, it was the hit that preceded it that caused the most damage.

On Thursday we learned that the Canucks will be without one of their best forwards for 4-6 weeks, as Jannik Hansen is out with a fractured rib. Hansen was injured when he was hit by Toronto Maple Leafs defenceman Morgan Rielly on a huge open ice bodycheck.

Yet when Kadri levelled Daniel, Hansen didn’t hesitate to defend his teammate, dropping the gloves with Toronto’s self-proclaimed ‘King of Pain’.

This of course means that Hansen dropped the gloves despite having a fractured rib. While Nikita Tryamkin and Luca Sbisa were also on the ice, Hansen was closest and didn’t leave anything up to chance.

The Canucks will miss Hansen for more than just his toughness. Hansen has blossomed into one of Vancouver’s most important players. He is more than a third-line grinder these days.

“It’s tough,” Canucks president of hockey operations told TSN 1040. “Obviously he’s a guy that brings a lot of speed to our group. He’s got great versatility, so that’s a tough loss for us.”

More often than not, Hansen helps give his line a shot in the arm.

He’s currently tied for the team lead in even strength points (6), a category he finished second to Daniel last season. Hansen is also one of Vancouver’s top two-way forwards and perhaps their best penalty killer.

The Canucks will play without Hansen in the lineup again on Thursday, as they finish off their six-game road trip in Detroit.