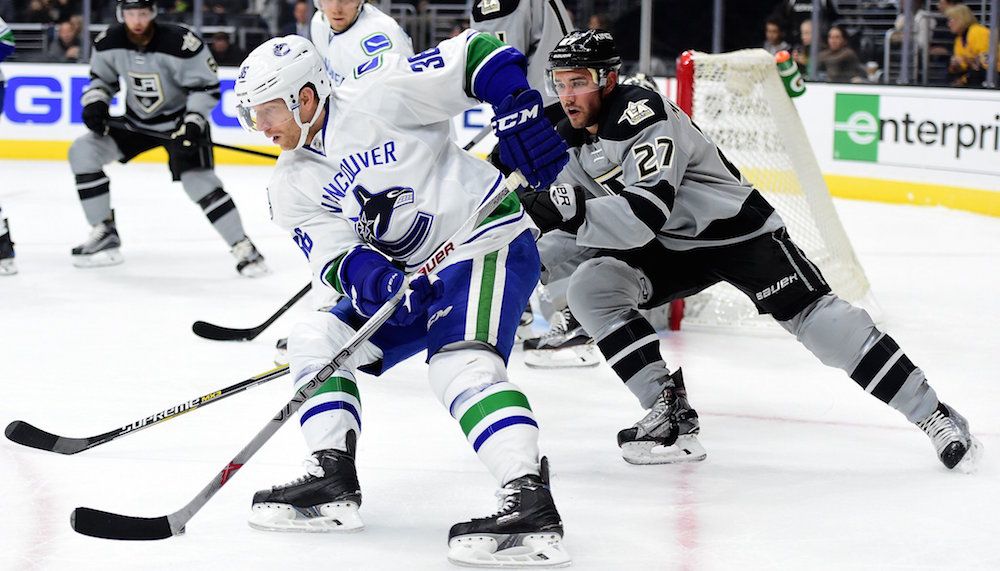 There are some crazy things happening in the world right now.

Donald Trump is one of America’s top two choices for President, Cleveland will play the Cubs in the World Series, and craziest of all – the Canucks are unbeaten in regulation five games into the season.

Sadly, Vancouver’s dream of a perfect season ended on Saturday, as they lost 4-3 in a shootout against LA.

But they’re 4-0-1 five games into a season where many predicted them to be one of the worst teams in the NHL, not only this season, but ever.

While their first four wins were against three of the NHL’s weaker teams – Carolina, Calgary, Buffalo – and a Blues team that’s coached to hang out in the neutral zone rather than score, their fifth game was against the high-powered Kings.

Even more ridiculous, they spotted LA a three-goal lead.

And if that wasn’t enough, Vancouver was badly outplayed. Even strength shot attempts were 54-30 Kings, and in overtime they were 11-2.

Yet somehow Vancouver pulled a point out of this game.

A few of them should probably be pulling the horseshoes out of their ears (this is a family friendly site) with the way things’ve been going.

1. What to do with Larsen

Coming into the season, we knew Philip Larsen was being brought in to help the power play and that he was a question mark on defence.

Five games in, Vancouver’s coaches are clearly not sold on his abilities to stop the opposition. Against LA Larsen had the highest percentage of offensive-zone faceoffs on the team at 83.33%. At the end of the second period, he was at 100% o-zone starts.

Despite the coaches’ protection, he still managed to give up a goal. Worse – it was on a Canucks power play.

Larsen looks like I do on skates when he switches from backwards to forwards, which is not a great thing to say about an NHL player, or anyone, really.

After this mistake, Larsen was benched for about eight minutes. Then Markus Granlund scored the goal that started the comeback, and Larsen was out of the doghouse.

Good timing too, because Vancouver had a power play soon after, and Larsen completely redeemed himself.

He took two slapshots from the point. Daniel Sedin missed the net when the first rebound landed on his stick, and when the puck landed on Henrik’s stick 30 seconds later, he made no mistake.

Apparently Luca Sbisa played so well this week he elicited a glowingly positive review of his play in the SixPack.

Whether this is something that happens only when Wyatt’s doing the writing or it happens only on the third Tuesday of every fourth month, I’m not sure.

After seeing him get back to normal with the following play on Saturday, I’m leaning towards the second theory.

He did this on the penalty kill, btw.

3. Where does Eriksson fit?

Loui Eriksson got a huge six-year, $6-million/year contract from the Canucks this summer, so when he comes under more scrutiny than Brendan Gaunce or even Derek Dorsett this season – you know why.

Through the team’s first four games, with Eriksson on the Sedin line, it didn’t look great. Here’s a tweet from last Saturday’s game against Calgary.

I’m yelling “HELP OUT” at Eriksson when the Sedins are cycling down low. Don’t think he’s listening to me.

Yes, I’m aware including my own tweet is about as cool as liking my own picture/status on Facebook, but I wanted to show I’m not making this judgement based on points or results.

I also wrote this after that game.

To be honest, it wasn’t a vintage night for the Sedins. Instead of putting on the usual clinic we’re used to seeing from them when they play the Alberta teams, they looked like they were… 36.

Scary thing is their new linemate, Loui Eriksson, who’s 31 and just signed a six-year contract with Vancouver, didn’t look much younger than them.

It was a strong reminder of how a fast, grinding winger with some skill (like 2011 Burrows) can help them retrieve pucks and compliment their style of play.

Not sure that’s Eriksson.

Four games into the season, Eriksson hadn’t done much to change how I felt about him after opening night.

Check out his individual shot attempt numbers before Saturday. This chart is sorted from lowest to highest.

Now, you might notice Burrows’ and Baertschi’s low shot attempt numbers and think they absolve Eriksson somewhat, but consider who they’re playing with. Eriksson was playing with the two best set-up passers on the team, so if he’s not shooting and putting pressure on the other team’s goalies, what was he doing?

Point is, the Sedins have been playing for a long time and we know what works with them.

One: someone who has speed, grinds, and like, gets in on the forecheck. (Yes, I’m aware that every player Jim Benning has ever brought to the team is their ideal linemate by his own descriptions of them).

For Saturday’s game, Vancouver changed it around, putting Sven Baertschi with the twins and Eriksson on a line with Sutter and Granlund. 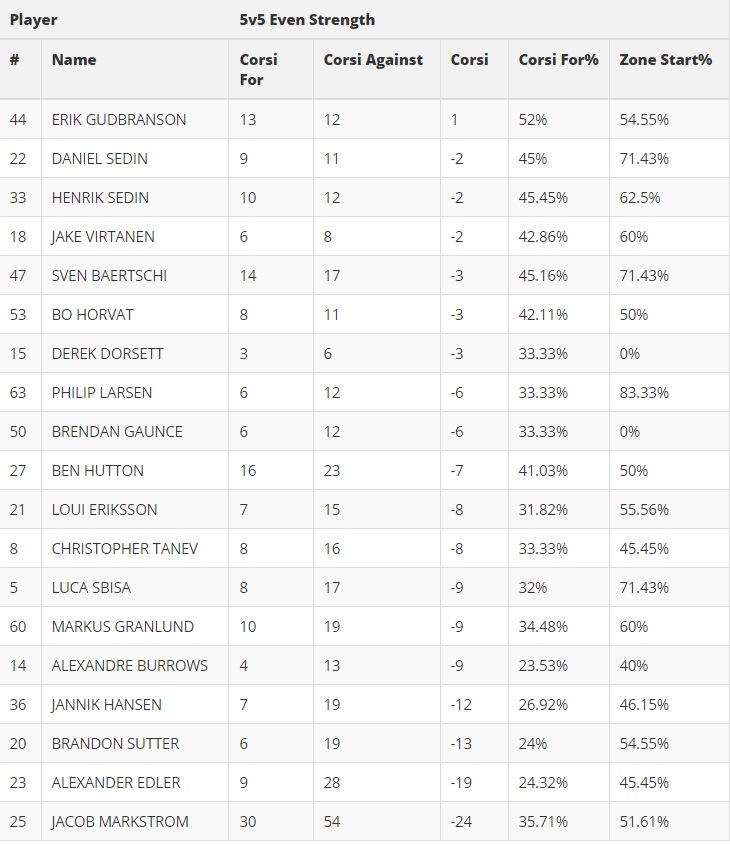 On a bad night for everyone, Eriksson wasn’t impressive.

And while Baertschi had good numbers, it’s hard to remember many great chances or even strong shifts from the Sedin line.

Whatever they do, the Canucks aren’t going to win many games with a near 2:1 shot attempt differential, so they better get the Sedins a linemate soon.

First, I’ve been wondering if we’d be talking about Ryan Miller going to LA as much as we are if not for Dave Pratt pushing it every morning this week.

On Saturday afternoon, goaltending expert Kevin Woodley spoke on TSN 1040 about the possibility of a trade.

“If you really want to make the playoffs, do you see the Canucks going with Markstrom and Backman?” Woodley asked.

“I just don’t see it happening.”

He explained how teams need two or three goalies to be successful in the NHL now, and how trading Miller wouldn’t fit into his understanding of Vancouver’s plan to get Markstrom ready to be a number-one.

Further – if you’ve heard how Jim Benning has talked about Miller since he brought him to Vancouver, you understand he feels about him the way Linus does about his blanket.

This one got me thinking – does Pratt actually think it could happen or is he taking a page out of Trump’s book and saying outrageous stuff for the publicity?

Either way, with most Canucks fans talking about the possibility of the trade, you can’t deny it worked.

You can see in the chart above that Virtanen had better numbers than most of his teammates.

He only played 10 minutes, and he didn’t play much in the third, but he can’t be benched for this performance.

Hindsight is 20/20? Not in this case – many Canucks fans questioned picking Virtanen over Nylander that day.

Note: Thanks to Ryan Biech for his help with the gifs in the SixPack